This Unit is about barter trade and Long Distance trade. 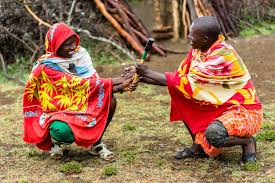 It is distinguishable from gift economies in many ways; one of them is that the reciprocal exchange is immediate and not delayed in time.

It is usually bilateral, but may be multilateral (i.e., mediated through barter organizations) and usually exists parallel to monetary systems in most developed countries, though to a very limited extent.

Barter usually replaces money as the method of exchange in times of monetary crisis, such as when the currency may be either unstable (e.g.,hyperinflation or deflationary spiral) or simply unavailable for conducting commerce.

This is exchange of goods for goods or goods for services.

i) It is difficult to get a customer.

iii) It is difficult to carry bulky goods

THIS VIDEO IS ABOUT BARTER TRADE AND WHAT IT ENTAILS

Until the middle of the 19th century, Uganda remained relatively isolated from the outside world.

The central African lake region was a world in miniature, with an internal trade system, a great power rivalry between Buganda and Bunyoro, and its own inland seas. When intrusion from the outside world finally came, it was in the form of long-distance trade for ivory.

Ivory had been a staple trade item from the coast of East Africa since before the Christian era. But growing world demand in the 19th century, together with the provision of increasingly efficient firearms to hunters, created a moving “ivory frontier” as elephant herds near the coast were nearly exterminated.

Leading large caravans financed by Indian moneylenders, Arab traders based in Zanzibar reached Lake Victoria by 1844. One trader,Ahmad bin Ibrahim, introduced Buganda’s kabaka to the advantages of foreign trade: the acquisition of imported cloth and, more important, guns and gunpowder. Ibrahim also introduced the religion of Islam, but the kabaka was more interested in guns.

Was the trade that carried from interior to the coast of East Africa.

Tribes that participated in long distance trade in Uganda.

Slave trade: The buying and selling of human beings

Slavery: The state of being enslaved: It’s a system where by some people are owned by others and are forced to work for others without being paid for the work they have done.

It  involves capturing, transporting of human beings who become the ‘property’ of the buyer. The slave trade was one of the worst crimes against humanity.

It involved burning people’s houses capturing them by force,flogging, chaining and walking long distances to the markets once in the market, slaves were sold as you would sell cows, goats, hens and other commodities.

The trade was started by Arabs who wanted labour for domestic use and for their plantations. However, they were later joined by Europeans.

The study of slave trade, will help you to appreciate the historical facts that took place e.g. the suffering the people of East Africa went through and how it was overcome to gain freedom, liberty and brotherhood.

It will also help you to understand why people behaved the way they did, its consequences for the lives of individuals and how a change of attitudes brought an end to the slave trade.

Reasons for the rise of slave trade.

THIS VIDEO SHOWS THE SHOCKING FACTS ABOUT SLAVE TRADE