This Unit is about Indirect Rule, Taxation and Industrialization. 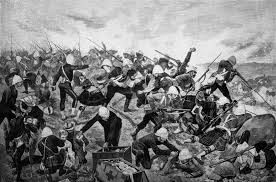 This was a system of administration where the British used local chief to rule on their behalf.

THE ROAD TO INDEPENDENCE IN UGANDA

The following are some of the laws introduced by colonialists:

Why were Africans not allowed to export cash crops?

How did Africans react to colonial law?

iv) The staged riots e.g. the 1945 riots which protested against the replacement of Nsibirwa as Kainite with Wamala and 1949 riot.

i) He never wanted them to take over his kingdom.

ii) The Banyoro did not want the Baganda chiefs in Bunyoro.

Give any  effects of Nyangire rebellion

Other areas which resisted British rule

Bugisu resisted Semei Kakungulu but they were defeated.

It was lead by chief Awich of payera.

The major cause was forced registration of guns

To enable the colonial government get money.

v) To pay for the costs of administration in Uganda.

Discrimination of people according to race, sex or social status.

The Whites and Asians had better social services than African.

The colonial system changed Uganda’s economy to a cash economy.

i) They wanted raw material.

ii) They wanted to stop Uganda from depending on British.

iii) To get income.

iv) They wanted to get income for administration.

How did the British colonization of Uganda get income or revenue

Results of the introduction of cash crops

This is where trade takes place through the use of money.

Is the setting up of industries in an area.

The British relaxed to introduce manufacturing industries in Uganda to compete with their own industries.  Small scales processing industries were set up for example cotton ginneries, coffee processing factories and tobacco curing.

Pollution of the environment.

The first Legco was made up of eight members who included the governor, the other seven were Europeans and one Asian.

Ugandans were not happy to have no representative on the Legco.

He was Sir Robert Throne.

Legco was established in 1921.

Legco was the parliament during colonial days.

Before the formation of Legco laws, which were used to rule Uganda  were set by the British.

ii) To advice the colonial government.

iii)To plan for development of Uganda.

Before 1945, no African was represented by Legco.

The first three Ugandans to join the Legco:

How did the first Ugandan join Legco?

Entebbe was the place Legco members conducted the debates.

Where was the colonial capital of Uganda?

The speaker of the Legco was Sir John Griffin.

In 1946 Mr. Yekosofi Innoyon was nominated to represent the northern region.

Why was Ugandans to be on Legco?

They were of ignorant about law.

What was  the factor which led to the formation of Legco.

There was need for the laws

How did many Ugandans join the Legco?