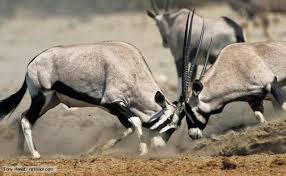 Result when two animals are after the same component of their environment when the supply of the component is limited. The most obvious type of competition is for a limited food supply, where a dominant animal (who might be the largest, oldest, or most aggressive animal) will usually be in the best position to consume his portion of the food supply first. This is frequently observed in groups of deer in which the adult female is usually the dominant animal. This dominance patterns or a social rank in animal populations is called “peck order”. 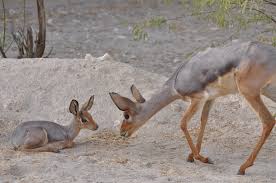 Between members of specie is observed in many kinds of animals. Pronghorn frequently associate in bands, bison live in herds; caribou travel on long migrations together; and most oxen live in a group that functions together as a unit. When danger approaches, they form a circle with each member facing outward. This type of coorporation among members of the same species may be beneficial to their survival under natural conditions. The presence of several pronghorn in a band makes it more likely that one member of the group will spot danger before a single would when traveling alone. On the other hand, dependence may also result in competition since more animals are crowded together. The amount of intraspecific (within species) cooperation varies at different times of the year. Many species are gregarious, but individuals may compete with each other at certain times, especially during the breeding seasons.

Natural types of relationships between animals of the same species are difficult to recognize in the world. Complete neutrality implies that the relationship between different animals is a random one, with no cause and effective relationship. Whatsoever e.g. male deer in late winter may have little or no contact with female deer, but they may have some kind of loose “males only” organization. Thus the degree of competition, cooperation, or neutrality between animals depends on a number of factors, and the complexity of these factors in space and time indicates the dynamic character of wildlife ecology.


The presence of interactions between animals of the same species and of different species has resulted in the formulation of some principles of behavior that are common to most animals viz:

Most animals spend most of their lives in a given area. Red fox, for example, once they have ceased to be transients or wanderers in search of a home area, will settle in a home range where they will secure their food and raise their young. The home range of one pair will not likely include any other red fox. When this competitive exclusion occurs, the home range is approximately called a territory . Home ranges of several individuals of the same species may overlap. This is common in field mice, and it is tolerated until certain population densities are reached. When the number of animals on a given area of land has not reached a critical point, it is very difficult to drive them out of their home range.

Further, if a high density does not cause emigration, they may stay even to a point where starvation and death occurs. This is observe in kob population that tend to congregate in kob yard – which is a special type of dry-season home range-when individuals will not move out to better food conditions. 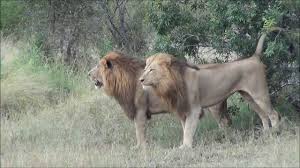 This term was introduced when the idea of competitive exclusion was attached to the concept of home range. The basic difference between a home range and a territory is that the home range is not defended against intruders of the same species but a territory issong/birds, for example, defend an area where they feed, mate and produce their young. Normally, males are most conspious in defense of territories against other males of the same species. 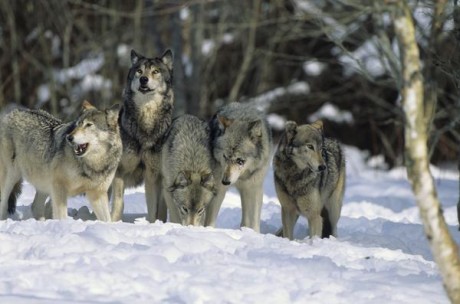 The social hierarchy or “peck order” has been mentioned earlier. These social ranks develop from experience, age, physiological condition, and physical size. Establishment of social order in the group of animals does not necessarily result in a perfect dominance hierarchy. The dominant animal and the most repressed animal may remain in their positions, but those between these two extremes may change positions, or at least give that appearance to the human observer. Mech (1966) pointed out that the most conspicuous wolf in a park of 16 was one who was clearly the most repressed individual. The leader was not always in the front of the pack.

The three factors above have some benefits of:

The isolation of individuals during the breeding season tends to disperse the population and provide for a more even use the available resources, especially food.

The more aggressive and dominant animals may be more successful as breeders, especially if the population is high and food or space on the range is in short supply.

With the spacing of animals, there are better food conditions and higher reproductive rates. It also results in a favourable growth of the individuals in a population.

A social order that is recognized by members of a population of animals will result in reduction of fighting between individuals.

The more or less organized dispersal of the population may result in a more stable productivity because the food and other resources on the range are utilized more evenly.

The even distribution of a population may distribute predators that can occur, since predators cannot take advantage of a high concentration of prey, there will be a greater stability in the predation rate.

Until about 50 years ago, predators were to be killed at every opportunity, recently the carnivores are recognized as occupying an important place in nature. It is now realized that an individual lion has far more aesthetic appeal, scientific interest, recreational value, and economic impact than an individual kob or an antelope.

The principles of predation may thus be stated as follows:

The term predator does not necessarily denote a destructive animal. Some of the animals most beneficial in respect of man’s economy are predators for example, the barn owl is capable of killing as many 8,000 rats and mice in a single year.

Generally speaking, predators live on the animal surplus produced by a prey species. Their influence seldom causes a serious reduction in succeeding breeding population. The law of “diminishing returns” preserves the prey species from serious decimation. Except in rare instance, the predator turns to other prey when a species becomes sufficiently reduced to be difficult to find.

Except under the most extenuating circumstances, no predator except man is capable of exterminating a prey species. Only man with his sophisticated equipment and materials (guns, traps, nets, poisons etc) can reduce animal populations to extermination. Only man, sometimes with the aid of his domestic animals can destroy the habitat of animal species. Only man can utilize biological methods, such as sterilization to accomplish total control.

The most destructive predators, when occurring only sparsely, can have little effect upon the total numbers of desirable prey species. However, only slightly destructive predator animals if it occurs in sufficient abundance can become a potent decimating agent. It is obvious that neither the rare cheetah nor the equally rare leopard would likely exert much pressure on prey populations when the numbers of each are very low. On the other hand, the ground squirrel or the grass cutter, occupying by the millions could be tremendously destructive if each of them took one guinea fowl egg during the entire year.

A reduction in number of predators on a given area does not necessarily mean a reduction in predator pressure on a specific prey animal. This is because a certain segment of a prey population appears to be vulnerable to predation. Conversely, another segment appears to be relatively secured. These predators which can survive the control efforts merely live better.

Herbivorous animal populations tend to increase toward self destruction, if not held in check by various counterforces, predation may be considered as a beneficial service for most prey species of this type. Predators may be an important factor in the survival of some prey species. Hoofed animals and rodents are inclined to overpopulate their habitat when effective controls are absent. The end result of this ever – populated is usually a “crash” brought on by starvation, disease, or emigration.

The net effect of predation upon a particular prey species is measured, not in terms of its % occurrence in the predators diet but rather in terms of the numbers lost to predation in relation to the total population of the prey species.

Availability, above all, governs the diet of most predatory animals. The availability of prey animals may be regulated or controlled by cyclic influences, weather conditions, presence of protective cover, adequacy of nutrition, parasites, or diseases and probably other factors. Usually a predator transfers its pressure to other species when the primary prey species becomes relatively or totally unavailable. In some cases, when the predators concentrate on a single prey species, it emigrates or starves when its source of food becomes unavailable.

Predator control may benefit a desired species on areas where other environmental conditions are favorable for increase, especially when the numbers of the prey species are well below normal. This applies particularly to big game species and large predators.

The need or value of predator control in game management is proportional to the intensity of the game harvest. Predator control efforts can be considered worth while only where any considerable portion of increase generated is utilized by man for food or recreation.

Problems related to predation and predator control are: