This Unit is about Atomic Nuclei and the theories involved in it.

Rutherford’s model of the atom

This was verified by Rutherfold and his team. The experiment involved the scattering of thin Gold foil.

THIS VIDEO IS ABOUT ATOMIC NUCLEUS IN PHYSICS

Where Z is the proton number or atomic number of the atom.

At closest distance of approach , all alpha particle’s kinetic energy is converted into electrostatic potential energy of the alpha particle or nucleus system.

A beam of alpha particles of energy 4.2MeV is incident normal to a gold foil. What is the closest distance of approach by the particles to the nucleus of the gold atom?

THIS VIDEO EXPLAINS MORE ABOUT Rutherford’s model of the atom

The Bohr model of the atom

Bohr’s theory of the hydrogen atom 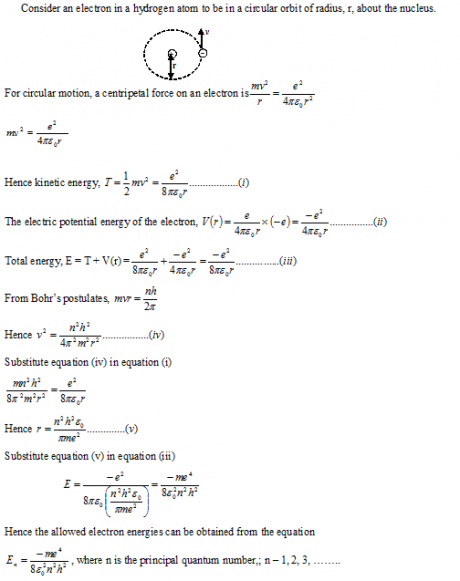 Note: (i) The energy of the electron is always negative. This means that work has to be done to move the electron to infinity where it is considered to have zero energy. The electron is therefore bound to the nucleus. 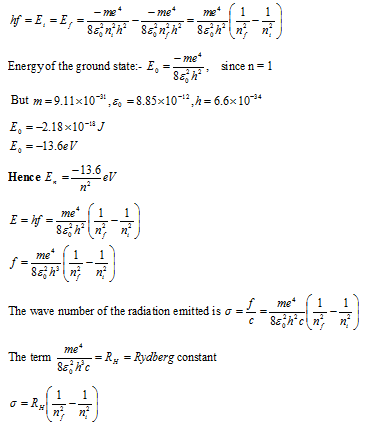 Energy levels are grouped into shells. Electrons in one shell have nearly the same energy. The shells are denoted by letters K, L, M, N etc. where K corresponds to n = 1, L to n = 2, M to n = 3 and so on.

Transitions of electron from a high energy level to lower energy level cause electron to lose energy hence producing electromagnetic waves. Transitions from other shells to K- shell emit spectra of wavelength grouped into what is called Lymann series.

Lymann series lie in the Ultra violet region of the spectrometer.

Transitions from other high energy levels to the L- shell ( n = 2), emits spectra of wavelengths referred to as Balmer series. Balmer series lie in the visible spectrum.

Transition from other high energy levels to the M – shell ( n = 3 ), emits spectra referred to as Paschen series which lie in the infra red region.

Note Bohr’s theory is to simple to explain spectra of more complicated atoms however, the following remain valid:

When atoms like H2, neon etc. are excited due to some form of heat from a frame or electricity, electron transition may occur to higher energy levels. This makes the atom unstable since energy has increased. Electron transition may occur to a vacancy left  in the lower energy level and radiation  of a definite wavelength or frequency is emitted. A line appear bright against a dark background. The lines are separated which give evidence that energy levels of the atoms are separate.

An atom’s energy can change by only discrete amounts. If a photon of energy, hf, is just enough to excite the atom, such that an electron can jump to one of higher energy levels, the photon will be absorbed. The intensity of the incident radiation is reduced since it has lost a photon. A dark line on a white background is observed, whose wavelength is that of the absorbed photon.

THIS VIDEO IS ABOUT THE BOHR MODEL OF THE ATOM