This unit talks about the Choice of Media giving the different types that one can use.It also looks at communication with Illiterates and how it can be done.

Media Types and their Properties 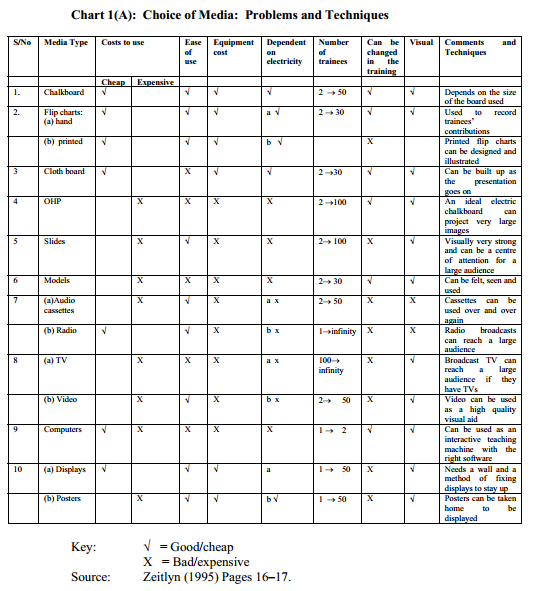 The Intelligence and Motivation of Illiterates

Illiteracy is viewed as a major barrier to development. It is very important to raise the literacy level of farmers. Human capacity development is desirable and should be promoted among farmers if the nation is to achieve food sufficiency.

Rural areas and the agricultural sector lose their most valuable human resources as young men and women move to the cities in search of jobs.

Some adults learn to read and write but there are often no interesting opportunities to apply the newly learnt skills in rural areas. In particular, there is a lack of material for reading. Reading skills are lost rapidly. Literacy campaigns are, thus, carried out in many countries in the national language as away of solving the problem. Functional literacy is what is needed, particularly in Africa. The programme is strictly limited to essential knowledge and operations required for specific purposes.

Where the audience is predominantly illiterate, field staff should use direct personal communication even if recipients have a certain degree of reading and writing skills. Perception involves the reception of sensory stimuli and, also, the active further processing of these stimuli through to storage in memory. Research on intelligence is one of the most important branches of cognitive psychology. Our adult farmers are intelligent. They have their cognitive skills developed over time. They can and do grasp relations and symbolic thinking which can be seen in their life.

According to Hoffman (2002), it is only through an increased use of writing that it becomes possible to hand down ever more and increasingly specialised stocks of knowledge. Increasing division of labour and specialisation is the logical consequence if the growing knowledge is to be applied.

In terms of individual learning potential, there are no limits to acquiring the cognitive abilities associated with modern literacy. Adults can easily undergo formal training. Two-dimensional pictorial depth perception can be learnt very quickly.

The true problem is that illiterates might be incapable of using symbolic forms of learning and of acquiring the associated abstract mental skills, but rather, from their perspective, these abilities appear strange, and exceedingly useless. A major barrier in applying tasks of the ‘intelligence test’ type thus already presents itself in making their purpose comprehensible.

Nine attributes which characterise the modes of thought and expression ofilliterates are:

Experts note that to gain orientation in this multifaceted world, illiterates have no other choice than to optimise recurrent events or connections in a set way, for instance, in proverbs, figures of speech, and sayings. In non-literate cultures, critical differentiation harbours the greatest hazard of disorientation. “Without a writing system, breaking up thought (that is, analysis) is a high-risk procedure.

In terms of motivation, there is no difference between literate and illiterate persons. There are recurring basic needs which everyone must meet.

Motives develop according to the person and situation, and socially and culturally mediated concepts of value exert a considerable influence upon motivational structures. Therefore, motivation of illiterates is not different from that of literates; the only difference may be in the situation.

If one takes literacy and illiteracy as the sole distinguishing criterion, it is hard to identify any consistent motivational differences (Zeitlyn, 1992). If we compare industrialised with developing countries, world market-oriented with subsistent-oriented farmers, Europeans with Africans or African city dwellers with African villagers, we find in each case relatively distinct difference both in fundamental motivations and in most spheres of behaviour.