This unit is the coastal History of 1000-1500AD and the coming of the Arabs along the coast..

The East African coast is about 3000km of coastline between Mogadishu present day Somalia and Sofala present day Mozambique. Originally, the coast of East Africa was inhabited by hunters and gatherers. But by 1000Ad there was an influx of new comers. Some came from Inland and others came from across Sea for example the Cushites who came from the Nile valley and settled along South from Mogadishu. Second the Bantu groups that came from south and settled along the coast between 500-800AD. New comers came from Arabia and Persia and they called the coast between Mogadishu and Cape Delgado, “The Land of the Zanj” meaning the land of the black people.

Around 1000AD, a Greek traveller named Ptolemy wrote about the trade across the Indian Ocean because he was impressed with what he saw. The trade attracted many people who came and introduced new commodities.

At first they would come and go but later settled at the East African coast. Among the traders who came, include the Indians from India, Arabs from Oman, Greeks from Greece and Persians from Persia. They introduced manufactured goods like swords, daggers, clothes, beads, glassware, mirrors etc. they exchanged them for local products like Ivory, Gold, Slaves, Hides and Skin, Tortoise shells etc.

As foreigners especially the Arabs who stayed intermarried with the local inhabitants hence gave rise to Swahili. 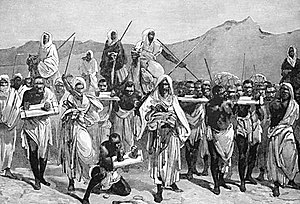 THE COMING OF THE ARABS TO THE EAST AFRICAN COAST

The first recorded places for the Arab settlement was Quanbalu. Other places like Lamu, Manda, Zanzibar, Kibwa, and Mogadishu. When they came to East African coast they referred to it as the Zanj Empire that is the lord of the black people. The interior of the East Africa remained unknown to the foreigners until after some time.

The process of the new comers at the East African coast changed and affected the African customs and religions.

For many centuries goods such as Ivory, Skin and Slaves had attracted people across the Indian Ocean. They had discovered the monsoon winds between November and April would blow their ships westwards towards Africa between May and October the Monsoon winds would blow them safely northeastwards home again. As the years some of these traders settled at various places on the coast and Island. They were accepted by the local people but lived apart from them.

The Arabs came to the coast because they wanted to spread their religion.

The Arabs wanted to dominate or control the trade on Indian Ocean. This trade dealt in a variety of items like slaves, ivory, skin, gold, turtle shells, glassware, beads, silk-leopard skins.

The coast had fertile soils for growing crops for example cloves, rice and coconuts.

The coast had good climate favorable for their climate in Arabia and Persia which was dry and windy. The East African climate was cool and warm.

They were escaping religious and political persecutions

They came because of the valuable goods like Gold, Ivory, and Slaves etc.

The East African coast had fresh water unlike salt water back in Arabia.

The Africans were hospitable they welcomed the new comers and gave them a good environment for settlement.

Many Arabs came to the East African coast because of love for adventure.

The East African coast was strategically positioned with favorable means of transport across the ocean. The presence of monsoon which made their transport easy to and from the East Africa because the winds seasonally blow the dhows.

They introduced the minting of copper coins for currency which replace the cowrie shells as a means of exchange in trade.

The Arabs introduced new trade items such as glass, cloth guns, and species.

They introduced the use of cowrie shells that replaced barter trade.

They led to the development of towns such as Mogadishu, Kilwa, Malindi, Mombasa, and Zanzibar.

The coming of the Arabs also boosted the trade thus leading to coastal prosperity.

Traders and chiefs who participated in the trade became richer.

The Arabs at the coastal are established themselves as sultans and Sheiks. They introduced the Sharia law which monopolized the system of justice used in administration.

They created rivalry among coastal towns such as Malindi and Mombasa over slave sales, then Sofala and Kilwa over gold trade.

They introduced guns which improved conflicts at the coast.

They increased slave trade thus leaing to warfare and insecurity among local members.

Prosperity of the coast attracted many other foreigners such as the Portuguese who later routed and plundered the coastal towns.

They introduced new religion that is Islam and many Africans adopted it from there.

They intermarried with the people at the coast giving rise to the Swahili.

They built schools and mosques in which the Quran was taught

They introduced Arabic language and used it as an official language in courts of law.

They introduced a new culture called the Afro-Arab culture.

They led to the decrease in population due to slave trade and conflicts at the trade towns.

The Swahili was derived from the Arabic world Swahili meaning coasts. And the Swahili culture developed as a result of the intermarriage between Africans at the coast and Arabs. It was a complete civilization borrowing much from the African and Arabs way of life for example way of dressing and their religion. Goods that were introduced include; Glass e.g. mirrors cloves and species.

The Swahili people were people of mixed blood, blown in skin color and speak a unique language. They were basically Bantu that borrowed some Arabic words. For many years the written language was Arabic.

AN IMAGE OF AFRO-ASIAN CHILDREN

Between 16th and 18th century, Swahili also become a written language. The Quran was the basic Holy book. Mosques were set up to enhance Islam. Arabic and Persian Architectures was adapted. Use of stones and bricks was also adapted and trade was carried out with the outsiders.

There was a new dressing code i.e. women were expected to wear long dresses called hijabs and vails on their heads while men wore tunics and turbans on their heads.

There was development of new language i.e. Swahili a mixture of Arab and African languages.

Development of a new religion called Islam most Swahili people took on Islam as their religion due to the influence of the Arab parents.

There was law and order which was based on the Sharia law.

There was a new life style. The Afro Arabs based their demands on Islam i.e. prayers five times a day, fasting, cleansing of the body, pilgrimages to mecca.

There was new architecture; flat topped and semi-permanent house unlike the African grass-thatched houses which were temporary.

Polygamous marriages were encouraged as an Islamic teaching. That is one man could marry four wives.

Introduction of a new education system as the Arabs built Quaranic schools to teach Arabic language, reading of the holy book which was the Quran names and orders of prayers i.e. Subuhi, Zuhuri, Aswiri, Magarib and Ishaed.

Sometimes referred to as the Trans-Indian Ocean trade, the Indian Ocean was the trade conducted across the Indian Ocean waters with the outside world. It was organized by the following countries; Arabia, Malaysia, Persia, Egypt, India, China, Indonesia, Syria, Greece and the East African Coast.

It was controlled by the Arabs along the East African coast. The trade commodities involved from East Africa were; Gold, ivory, leopard skin, turtle shells and Rhinoceros horns.

Ivory was obtained through hunting elephants. Gold was mined and supplied by the African middle man such as the Nyika, Makaranga people in central Africa. Slaves were captured mainly criminals and war captives.

They used the North East and South West monsoon trade winds which blew from Arabia to East African coast between May and October and back to Arabia in November and April respectively.

All dhows were taxed by Sultans of Kilwa on arrival.

At first there was silent barter system of trade used which was later improved by developed of Swahili languages as the means of communication.

Coins were later minted and used by some coastal towns e.g. Zanzibar and Kilwa.

Trade was monopolized by Arabs and African merchants.

Goods left East African coast for commercial Centers of India, Arabs and the far East that is Siraf,Ormuz, Bagdad, Muscat, Mecca and Dubai.

There were also Indian depots of Goa, Calcutta, Bombay

The Trans-Indian Ocean trade prospered from 1000 until 1520 when it declined due to the Portuguese arrival.

Outsiders never went into the interior because goods reached them at the coast they feared hostile tribes.

EFFECTS OF THE INDIAN OCEAN TRADE

It led to loss of lives due to raids in search for slaves thus leading to population decrease.

It led to exploitation of resources at the coast such as gold, ivory, slaves etc.

The chiefs and the African middlemen became richer.

Displacement of people and destruction of property

New trade items were introduced like beads, guns, cloth and wine etc.Development of towns at the coast like Kilwa, Mombasa, Zanzibar etc

Development of ports and harbors

Emergence of the Swahili language as a means of communication

It led to population increasing at the coast as many people from inside and outside East Africa flooded the coast.

It led to emergence of small scale industries in some towns for example minting of coins at Kilwa and Zanzibar.

There was introduction of the sharia law to ensure justice

It led to the establishment of Quarinic schools

It led to the introduction of new crops such as cloves, cotton, sisal, rice, sugarcane.

The Indian Ocean trade penetrated into the interior.

It led to new leadership by the Sultans instead of the local people.