MTH4: CONSTRUCTION AND LOCI PLUS VARIATIONS

This unit is about construction and loci where a locus of a point is the path it describes and variations. 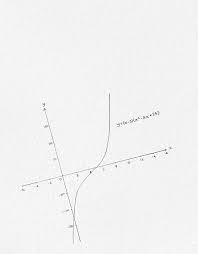 A locus of a point is the path it takes as it moves following the given conditions. (Law)

This section covers Loci within Geometry and Measures.

The points on the line are equidistant from A and B

Don’t let the term ‘locus’ put you off. Questions on loci (which is the plural of locus) often don’t use the term.

Therefore all of the points satisfying both of these conditions are shaded in red.

The word locus describes the position of points which obey a certain rule.

The diagram shows the walls of a rectangular shed, ABCD, measuring 8m by 5m. A goat is tied to the corner of C by a rope 6m long.

The shaded area shows the part the goat can reach.

1. Draw a line XY of a length 10 cm. Construct the locus of a point which is equidistant from x and y.
2. Draw two lines AB and AC of length 8 cm, where , BAC = 600. Construct the locus of appoint which is equidistant from the lines AB and AC.
3. Draw a circle , centre O of radius 5 cm and a radius OA. Construct the locus of appoint P. which moves so that OAP = 900
4. Draw a line AB of length 10 cm and construct the circle with diameter AB. Indicate the locus of a point P which moves to that APB = 900
Exercise
1. Inspector Clouseau has put a radio transmitter on a suspects car, which is parked some where In Gayaza. From the strength of the signals received at Points R and P, Clouseau knows that the car is
a) not more than 10 km from R and
b) not more than 20 km from R
Make a scale drawing (1 cm=10 km) and show the possible positions of the car .

A VIDEO BELOW ABOUT CONSTRUCTION AND LOCI

Mathematical equations display some type of parameters when it established a relationship. There are normally two types of quantities exist. One is constant. It doesn’t change with the changes in other parameters in the equation.

However, others are the variables which change in different situations. The changing of variable parameters is often gone by the term variations or algebraic variations.

Let’s explain with an example of a simple equation y = mx wherein m refers to a constant. Further, if we assume that the value of m is 5, then, in this case, the equation becomes y = 5x.

Variations can be of different types according to the pattern of changing or relationships of variables.

Proportion says that two ratios (or fractions) are equal.

The ratios are the same, so they are in proportion.

A rope’s length and weight are in proportion.

When shapes are “in proportion” their relative sizes are the same.

Example: International paper sizes (like A3, A4, A5, etc) all have the same proportions:

So any artwork or document can be resized to fit on any sheet. Very neat.

NOW, how do we use this?

Example: you want to draw the dog’s head … how long should it be?

Let us write the proportion with the help of the 10/20 ratio from above:

Now we solve it using a special method:

Multiply across the known corners,
then divide by the third number

And we get this:

So you should draw the head 21 long.

We can use proportions to solve questions involving percents.

The trick is to put what we know into this form:

Note: we could have also solved this by doing the divide first, like this:

We can also find a Percent:

Fill in what we know:

Or find the Whole:

Example: The sale price of a phone was $150, which was only 80% of normal price. What was the normal price?

Fill in what we know:

We can use proportions to solve similar triangles.

Example: How tall is the Tree?

Sam tried using a ladder, tape measure, ropes and various other things, but still couldn’t work out how tall the tree was. 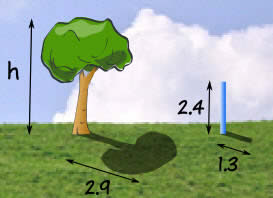 But then Sam has a clever idea … similar triangles!

Sam measures a stick and its shadow (in meters), and also the shadow of the tree, and this is what he gets:

Now Sam makes a sketch of the triangles, and writes down the “Height to Length” ratio for both triangles:

And he didn’t even need a ladder!

The “Height” could have been at the bottom, so long as it was on the bottom for BOTH ratios, like this:

Let us try the ratio of “Shadow Length to Height”:

It is the same calculation as before.

Ratios can have more than two numbers!

For example concrete is made by mixing cement, sand, stones and water. 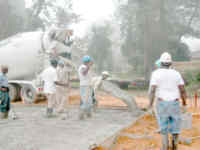 A typical mix of cement, sand and stones is written as a ratio, such as 1:2:6.

We can multiply all values by the same amount and still have the same ratio.

Example: you have just put 12 buckets of stones into a mixer, how much cement and how much sand should you add to make a 1:2:6 mix?

Let us lay it out in a table to make it clearer:

You have 12 buckets of stones but the ratio says 6.

That is OK, you simply have twice as many stones as the number in the ratio … so you need twice as much of everything to keep the ratio.

Here is the solution:

So the answer is: add 2 buckets of Cement and 4 buckets of Sand. (You will also need water and a lot of stirring….)

In our mix we have:

So it should be just right!

That is the good thing about ratios. You can make the amounts bigger or smaller and so long as the relative sizes are the same then the ratio is the same.

A VIDEO BELOW ABOUT DIRECT AND INVERSE VARIATION