This unit is about the present situation of change in Man and the changing society. 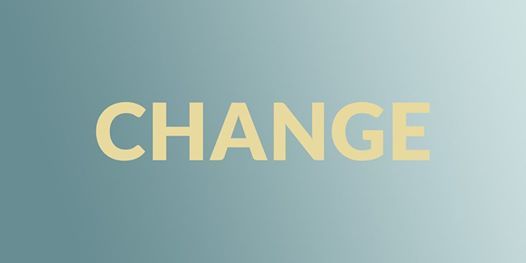 Change is a general transition of something or phase to another state condition.

Implies movement toward a goal, an idealized state, or a vision of what should be and movement away from present conditions, beliefs, or attitudes.

A never ending process of readjustment and re-adaptation, as man responds behaviorally to ever changing circumstances.

Change is a fact of life. Examples of change: going to school: changes in knowledge and technology; urbanization; rural development; social, political and economic changes; religious changes. Reactions to change

It can be both on an individual level and societal level.

Social change can evolve from a number of different sources, including contact with other societies (diffusion), changes in the ecosystem (which can cause the loss of natural resources or widespread disease), technological change (epitomized by the Industrial Revolution, which created a new social group, the urban proletariat), and population growth and other demographic variables. Social change is also spurred by ideological, economic, and political movements.

These changes occur over time and often have profound and long-term consequences for society. Well known examples of such change have resulted from social movements in civil rights, women’s rights, and LBGTQ rights, to name just a few. Relationships have changed, institutions have changed, and cultural norms have changed as a result of these social change movements.

Technology can lead to changes in productivity, efficiency and employment demand. For example, the use of digital computers by businesses beginning in the 1960s led to some productivity improvements and many new industries. Historically, it is common for predictions of technology driven economic change to be overly dramatic.

The development of the soft and hard infrastructure of a nation. For example, a country that builds institutions, transportation systems,technology infrastructure and resilient cities that make its economy more efficient.

Structural changes to markets or the introduction of new markets. For example, ecommerce is a relatively new market for goods and services.

Shifts in supply such as a shortage caused by a war. Supply can also suddenly increase due to technological advancement.

Demand shifts such as changing consumer needs and preferences. For example, refrigerators cause a shift in food consumption patterns when they are adopted by consumers in a developing country.

Shifts in trade such as the long term trend towards more international trade known as globalization. On the flip side, a trade war can cause a sudden reduction in trade.

Political change is a normal function of internal and external politics. Rulers will be voted out, retire, or die while in power, and the new leader will make changes. The more powerful countries will anticipate political change and make the process clear and smooth. Countries that appear more prone to in-fighting and/or civil wars are likely led by a person or group that refuses to allow political change or lacks a clear understand of how political change is to occur.

When there is a significant disruption in a government that leads to new or modified leadership or policies, we call this type of change political change.

Social change is also caused by tension and conflict. Structural strain, deprivation, cultural revitalisation have been the major causes of conflict. Again social division based on class, caste, gender, ethnicity, estate, etc. have also been important sources of conflict in society.

Social movements are organised efforts of groups of people to bring about deliberate change in the values, norms, institutions, culture relationships and traditions of the society. They also generate new identities and a new perspective.

Inventions produce new products, ideas, and social patterns. It is a new combination or a new use of existing knowledge. Inventions may be classified into material (telephone, aeroplane), and social inventions (alphabet, language, government, etc.). Each invention is new in form, function and meaning and has long-term possibilities of impact. Discovery is finding something that has never been found before, or finding something new in something that already exists.

A large part of change in society is caused by change in culture. Culture is a system that constantly loses and gains components. Invention, discovery and diffusion are considered to be the main sources of cultural change.

Political changes most often stem from social or economic issues that a country may be facing. For instance, political change may be caused by social issues, such as the tensions between differing racial and ethnic groups or policies that deny specific groups of people civil rights. Political change may also occur if a country is suffering from economic turmoil and its citizens feel the pressure of not having enough money and feel that the government is not helping them out. This frustration then comes to a head and sparks political change.

A main cause of changes in economic systems is technology.  When different technologies become available, economic systems can be radically transformed.  Changes in agricultural technology, for example, can make it possible for fewer people to grow more food.  This can free large numbers of workers from farming to do other things.  Perhaps the best example of technological change transforming an economic system was the Industrial Revolution.

The major impact of these transformations is a change in the relations between people in society.  For example, when most people were doing subsistence farming, people tended to live in small villages that were very tightly knit together.  There were strong social bonds between the various people.  When this sort of economic system started to disappear and people moved to cities to work in factories, the tight bonds were severely weakened.  People came to see one another more as members of what sociologists call “secondary groups” than as members of “primary groups.”

The composition of population depends upon variables like age, sex, marital status, literacy etc. Changes in demographic structure, which may be caused by changes in mortality rates, will produce changes in the ratio of breadwinners to dependents.

It is an established fact that there is an intimate connection between our beliefs and social institutions, our values and social relationships. Values, beliefs, ideas, institutions are the basic elements of a culture. Certainly, all cultural changes involve social change.

Social and the cultural aspects are closely interwoven. Thus, any change in the culture (ideas, values, beliefs etc.) brings a corresponding change in the whole social order. Social institutions cannot live on life shells within which life is extinct.

(a) Cultural change by discovery and invention, and

(b) Cultural change by diffusion and borrowing.

The first comes from within a society and culture, and the second from another culture outside of the society. A discovery or an invention adds to the fund of our verified knowledge which later on becomes a factor of social change. Knowledge of bacterial infection brought about many changes in the behaviour of people in the form of prevention and cure of disease.

Of economic influences, the most far-reaching is the impact of industrialization. It has revolutionized the whole way of life, institutions, organisations and community life. In traditional production systems, levels of production were fairly static since they were geared to habitual, customary needs. Modern industrial capitalism promotes the constant revision of the technology of production, a process into which science is increasingly drawn.

The impact of industrialisation (science and technology) we can easily see on Indian family system (joint family) and caste system. (For detailed analysis of the influence of economic factor, see Marx’s views discussed in Economic Theory of Social Change).

State is the most powerful organisation which regulates the social relationships. It has the power to legislate new laws, repeal old ones to bring social change in the society. Laws regarding child marriage, widow remarriage, divorce, inheritance and succession, untouch­ability are some of the examples which have brought many changes in the social structure of Indian society.

There is a direct relationship between the type of political organisation and social change. In hunting and gathering societies, there were no political organisation capable of mobilising the community, as such; there were minimum changes in the societies. In all other types of society, however, the existence of distinct political agencies, such as chiefs, lords, kings and governments strongly affects the course of development of society takes. A ruler may choose to channel resources into building up his castle, for example, even when this impoverishes most of the population.

Political development in the last two or three centuries (in India especially after independence) has certainly influenced economic change as much as economic change has influenced politics. Govern­ments now play a major role in stimulating (and sometimes retarding) rates of economic growth. In all industrial societies there is high level of state intervention in production.

Almost any event can trigger political change. An unexpected resignation, a terrorist act, or a currency collapse can completely transform the political and economic landscape. Politics and economics are forever entwined, as was dramatically demonstrated with the collapse of the Thai Baht in 1997. The collapse of the Thai currency set off a chain of events that ultimately led to the economic meltdown of many of Asia’s economies and impacted most of the rest of the world

Social change has been rapid in recent decades, with new family and kinship networks, changing roles of individuals within society.

The pace of technological innovation is faster and faster. It has also allowed members of the community to get more accustomed to new technologies hence setting up digitized communities.

A mobility rich population, unwilling to forego the mobility freedoms with age and with young digital generations with different value sets which demand new types of mobility – a new world where transport modes become attachments to smartphones; and the whole locus of mobility control and seamless movement transfers to the user.

An international investor often faces the risk of expropriation of assets when a new government takes power or an existing government changes its stance toward foreign investment. The risk of not being able to convert local currency into hard currency or to transfer hard currency out of a country because of a shortfall in the national foreign exchange supply or a change in law is ever-present. And, depending on where an investment is located within a country, the risk of damage to a facility or an interruption of business operations because of political violence can arise without warning.

For international traders, political risks are every bit as real. Imagine exporting goods to a government buyer only to discover after the fact that it doesn’t pay its bills or the United Nation has just imposed an embargo on the country or your own government has just cancelled your export license. Wrongful calling of on-demand guaranties (for bid bonds, performance bonds, or advance payment guaranties) by governments happens all the time. Political change only accentuates the political risks inherent in trading abroad.