CRE4: Christian Involvement in the World in the Old Testament

This unit is about how people in the old Testament responded to God's call and how God related with his people.

The Old Testament is the first part of the Christian biblical canon, which is based primarily upon the twenty-four books of the Hebrew Bible, a collection of ancient religious Hebrew writings by the Israelites believed by most Christians and religious Jews to be the sacred Word of God.

In the third month after the children of Israel had gone out of the land of Egypt, on the same day, they came to the Wilderness of Sinai.

For they had departed from Rephidim, had come to the Wilderness of Sinai, and camped in the wilderness. So Israel camped there before the mountain. 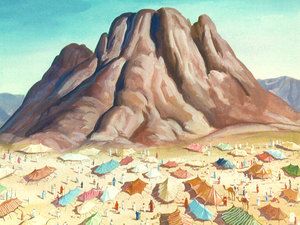 a. They came to the Wilderness of Sinai: It took them three months of trusting God to get to this place, but they finally arrived.

They saw God’s deliverance from Egypt, received His guidance on the way to go, they saw His glorious victory at the Red Sea, they saw God provide food and water miraculously, and they saw a prayerful victory won over the Amalekites.

i. Israel will stay in the Wilderness of Sinai until Numbers 10. More than 57 chapters of Scripture are devoted to what happened to Israel in the year they camped at Mount Sinai.

b. So Israel camped there before the mountain: In one sense, all that went before was meant to bring them to this place.

This was the beginning of the fulfillment of what God said in Exodus 3:12: this shall be a sign to you that I have sent you: When you have brought the people out of Egypt, you shall serve God on this mountain.

Sinai was the place where Moses had his “burning bush” experience with God. The whole nation of Israel would soon experience some of what Moses had before.

If the people would meet God at this mountain, it could only happen because Moses had already been there. The people could not go farther than their leader.

ii. If the traditional site of Mount Sinai looks like anything, it looks like a huge pulpit – a sudden, steep outcropping of the mountain out in the wilderness. Here, God would preach the most dramatic sermon ever heard.

Ways in which people responded to God

Moses:
When his mother set him adrift in a basket on the Nile River, Moses escaped Pharaoh’s death warrant. He was found by an Egyptian princess, who adopted him and raised him in royalty. But Moses fled to the desert after killing an Egyptian, who was beating a Hebrew.

Leaving his wealth behind, Moses became a shepherd. He was content with his simple life, until he heard the voice of God in a burning bush that wasn’t consumed by fire.

Moses’ great escapes were over. He could do nothing but obey God’s call, eventually leading the Israelites from captivity to freedom.

Samson:
Samson is a man of legendary strength. He tore a lion in half and killed 1,000 Philistines using the jawbone of a donkey.

As a Nazarite, Samson dedicated his life to God and was forbidden to cut his hair. Samson attributed his strength to his hair, which Delilah–his duplicitous lover–cut while he slept.

Samson’s strength immediately disappeared. He was captured by Israel’s enemy, and his eyes were gouged out. Blind and mocked, he was taken to a temple where thousands of Philistines gathered.

Samson asked for God’s strength and pushed the temple’s columns.

The building collapsed, killing all the Philistines and Samson, who realized that God alone was his source of strength.

Solomon:
At the start of his reign, God tested Solomon by inviting him to ask for any gift he wanted. Solomon chose wisdom and was reputed for his fair judgments.

Solomon enjoyed great financial and diplomatic success. But his wealth and power drew him away from God. At the height of his reign, Solomon had 700 wives and 300 concubines and seemed to love them more than the Lord.

In the end, he realized his folly. In Ecclesiastes 12:13, he wrote: “Respect and obey God! That is what life is all about.”

Esther: Queen of Persia
Originally named the Hebrew Hadassah, Esther was orphaned and adopted by her cousin Mordecai, a Jew who held a high position in the King of Persia’s court.

Esther caught the eye of the king, who married her. As a result, she and Mordecai were elevated in the court. Haman, one of the King’s chief ministers, was jealous of Mordecai’s influence and concocted a plan to murder him and all the Jews living in Persia.

Learning about the plot, Esther used her influence and told the king. Haman was hanged, and all the Jews in Persia were saved.

Daniel in the Lion’s Den
A quiet hero, Daniel didn’t do anything spectacular in his life. But God often works precisely through people who quietly obey him.

Captured by the Babylonians, Daniel assimilated into Persian life, but still remained true to the Jewish faith. For this, he was thrown into a den of ravenous lions.

Miraculously, the lions didn’t attack him, and the king released him. “Daniel’s faith in his God had kept him from being harmed.” Daniel 6:23

Worship of one God (monotheism)

Christianity also believes in a single all-powerful god. However, most Christians believe the Christian God is divided into Father, Son, and Holy Spirit and that the son took mortal form in the shape of Jesus, born to a Jewish woman named Mary.

The most common term for the Christian deity is “God.”