This unit is about Adjectives, how to use adjectives in a sentence and the most common adjectives. 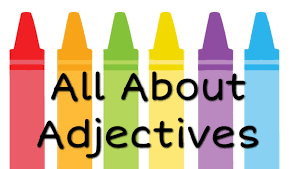 Adjectives are describing words, such as blue, angry, cold, dry and hard. Technically, an adjective is described as modifying or quantifying a noun or pronoun, but an easier way to look at the definition of adjectives is that an adjective tells us more and gives us extra information about something. For example, if someone said: “It’s a warm day”, the adjective warm is giving us extra information about the noun day.  What are adjectives? Adjectives are words that make sentences more interesting and add spice to writing.

Give nationality or origin,

Tell more about a thing’s characteristics,

Tell us about age, 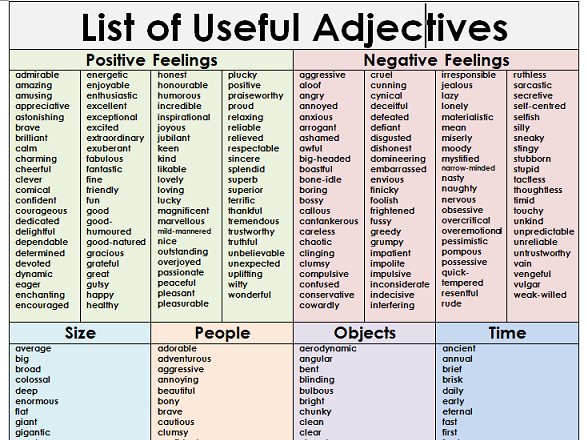 Tell us about size and measurement,

Tell us about colour,

Tell us what something is made of,

Tell us about shapes,

Express a judgement or a value.

When a number of adjectives are used together, the order depends on the function of the adjective. The usual order is:

Using Adjectives in a Sentence

Adjectives in English are invariable. They do not change their form depending on the gender or number of the noun.

To emphasise or strengthen the meaning of an adjective, use the adverbs very or really in front of the adjective you want to strengthen.

Adjectives in English usually appear in front of the noun that they modify.

Adjectives can also appear after being and sensing verbs like to be, to seem , to look & to taste. 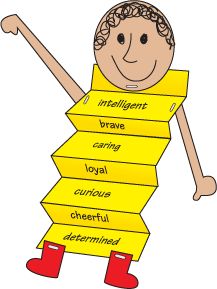 Adjectives appear after the noun in some fixed expressions.

The adjectives involved, present & concerned can appear either before or after the noun that they modify, but with a different meaning depending on the placement.