This unit is a continuation of Adjectives and it explores the Comparative adjectives.

When we talk about two things, we can “compare” them. We can see if they are the same or different. Perhaps they are the same in some ways and different in other ways. We can use comparative adjectives to describe the differences. 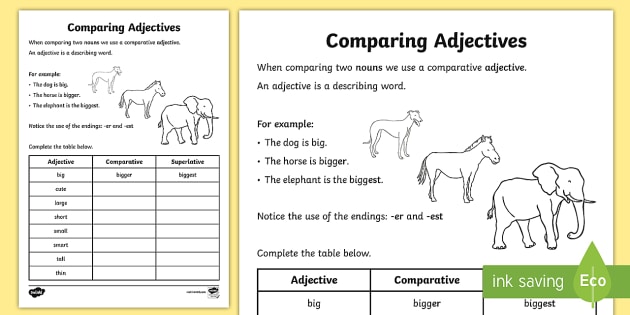 They are used in sentences where two nouns are compared, in this pattern:

The second item of comparison can be omitted if it is clear from the context (final example below).

There are two ways to make or to “form” a comparative adjective:

With some 2-syllable adjectives, we can use “-er” OR “more”:

Use of Comparative Adjectives

Often, the comparative adjective is followed by “than”.

Look at these examples:

If we talk about the two planets Earth and Mars, we can compare them as shown in the table below:

Although we use comparative adjectives when talking about two things (not three or more things), in fact one or both of the things may be a group of things.

Here, we are talking about hundreds of mountains, but we are still comparing one thing (Mt Everest) to one other thing (all other mountains).