This unit discusses punctuation marks and how they are used in English grammar and writing. 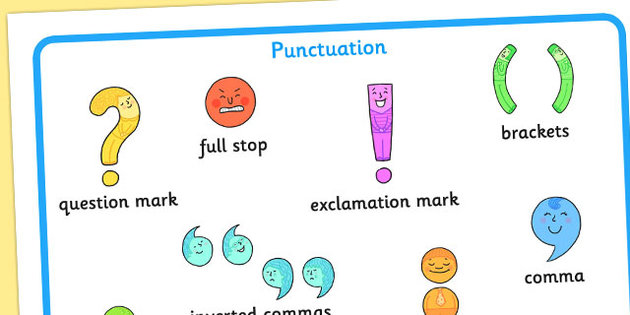 Punctuation is used to create sense, clarity and stress in sentences. You use punctuation marks to structure and organise your writing.

You can quickly see why punctuation is important if you try and read this text which has no punctuation at all:

Now let’s see if punctuating it makes a difference!

Perhaps you don’t always need to use commas, periods, colons etc. to make sentences clear. When I am in a hurry, tired, cold, lazy, or angry I sometimes leave out punctuation marks. “Grammar is stupid! I can write without it and don’t need it,” my uncle Harry once said. He was not very clever, and I never understood a word he wrote to me. I think I’ll learn some punctuation – not too much, enough to write to Uncle Harry.

There are 14 punctuation marks that are commonly used in English grammar. They are the period, question mark, exclamation point, comma, semicolon, colon, dash, hyphen, parentheses, brackets, braces, apostrophe, quotation marks, and ellipsis. Following their correct usage will make your writing easier to read and more appealing.

Three of the fourteen punctuation marks are appropriate for use as sentence endings. They are the period, question mark, and exclamation point.

The period (.) is placed at the end of declarative sentences, statements thought to be complete and after many abbreviations.

The period (known as a full stop in British English) is probably the simplest of the punctuation marks to use. You use it like a knife to cut the sentences to the required length. Generally, you can break up the sentences using the full stop at the end of a logical and complete thought that looks and sounds right to you.

Many abbreviations require a period. Dr, Mr, Mrs, and Ms do not take a period in British English, nor do most abbreviations taken from the first capital letters such as MA, Phd, or CIA. In American English, some of these do require periods or both usages are correct (with and without periods). If you require 100% accuracy in your punctuation, refer to a detailed style guide for the abbreviation usage rules in the variety of English you are using.

Often you will see a sentence concluding with three dots. This indicates that only part of the sentence or text has been quoted or that it is being left up to the reader to complete the thought.

PERIOD AFTER A SINGLE WORD

Sometimes a single word can form the sentence. In this case you place a fullstop after the word as you would in any other sentence. This is often the case when the subject is understood as in a greeting or a command.

Numbers use periods in English to separate the whole number from the decimal. A period used in a number is also called a “decimal point” and it is read “point” unless it refers to money.

Use a question mark (?) to indicate a direct question when placed at the end of a sentence.

The exclamation point (!) is used when a person wants to express a sudden outcry or add emphasis.

The comma, semicolon and colon are often misused because they all can indicate a pause in a series.

The comma is used to show a separation of ideas or elements within the structure of a sentence. Additionally, it is used in numbers, dates and letter writing after the salutation and closing.

Whether to add a final comma before the conjunction in a list is a matter of debate. This final comma, known as an Oxford or serial comma, is useful in a complex series of elements or phrases but is often considered unnecessary in a simple series such as in the example above. It usually comes down to a style choice by the writer.

The semicolon (;) is used to connect independent clauses. It shows a closer relationship between the clauses than a period would show.

A colon (:) has three main uses. The first is after a word introducing a quotation, an explanation, an example, or a series.

The second is between independent clauses, when the second explains the first, similar to a semicolon:

The third use of a colon is for emphasis:

A colon also has non-grammatical uses in time, ratio, business correspondence and references.

Dash and the Hyphen

Two other common punctuation marks are the dash and hyphen. These marks are often confused with each other due to their appearance but they are very different.

A dash is used to separate words into statements. There are two common types of dashes: en dash and em dash.

A hyphen is used to join two or more words together into a compound term and is not separated by spaces. For example, part-time, back-to-back, well-known.

Brackets, braces and parentheses are symbols used to contain words that are a further explanation or are considered a group.

Brackets are the squared off notations used for technical explanations or to clarify meaning. If you remove the information in the brackets, the sentence will still make sense.

Braces ({}) are used to contain two or more lines of text or listed items to show that they are considered as a unit. They are not commonplace in most writing, but can be seen in computer programming to show what should be contained within the same lines. They can also be used in mathematical expressions. For example, 2{1+[23-3]}=x.

Parentheses ( () ) are curved notations used to contain further thoughts or qualifying remarks. However, parentheses can be replaced by commas without changing the meaning in most cases.

The final three punctuation forms in English grammar are the apostrophe, quotation marks and ellipsis. Unlike previously mentioned grammatical marks, they are not related to one another in any form.

An apostrophe (‘) is used to indicate the omission of a letter or letters from a word, the possessive case, or the plurals of lowercase letters.Examples of the apostrophe in use include:

It should be noted that, according to Purdue University, some teachers and editors enlarge the scope of the use of apostrophe, and prefer their use on symbols (&’s), numbers (7’s) and capitalized letters (Q&A’s), even though they are not necessary.

Quotations marks (” “) are a pair of punctuation marks used primarily to mark the beginning and end of a passage attributed to another and repeated word for word. They are also used to indicate meanings and to indicate the unusual or dubious status of a word.

Single quotation marks (‘ ‘) are used most frequently for quotes within quotes.

The ellipsis is most commonly represented by three periods (. . . ) although it is occasionally demonstrated with three asterisks (***). The ellipsis is used in writing or printing to indicate an omission, especially of letters or words. Ellipses are frequently used within quotations to jump from one phrase to another, omitting unnecessary words that do not interfere with the meaning. Students writing research papers or newspapers quoting parts of speeches will often employ ellipsis to avoid copying lengthy text that is not needed.

There are a few differences between punctuation in British and American English. The following charts details some of those differences: