This unit is about words of quantities; many, much, aliitle, a few e.t.c and how they are used.

The words some and any are used when the speaker cannot specify or does not need/want to specify a number or an exact amount. Compare the following sentences: 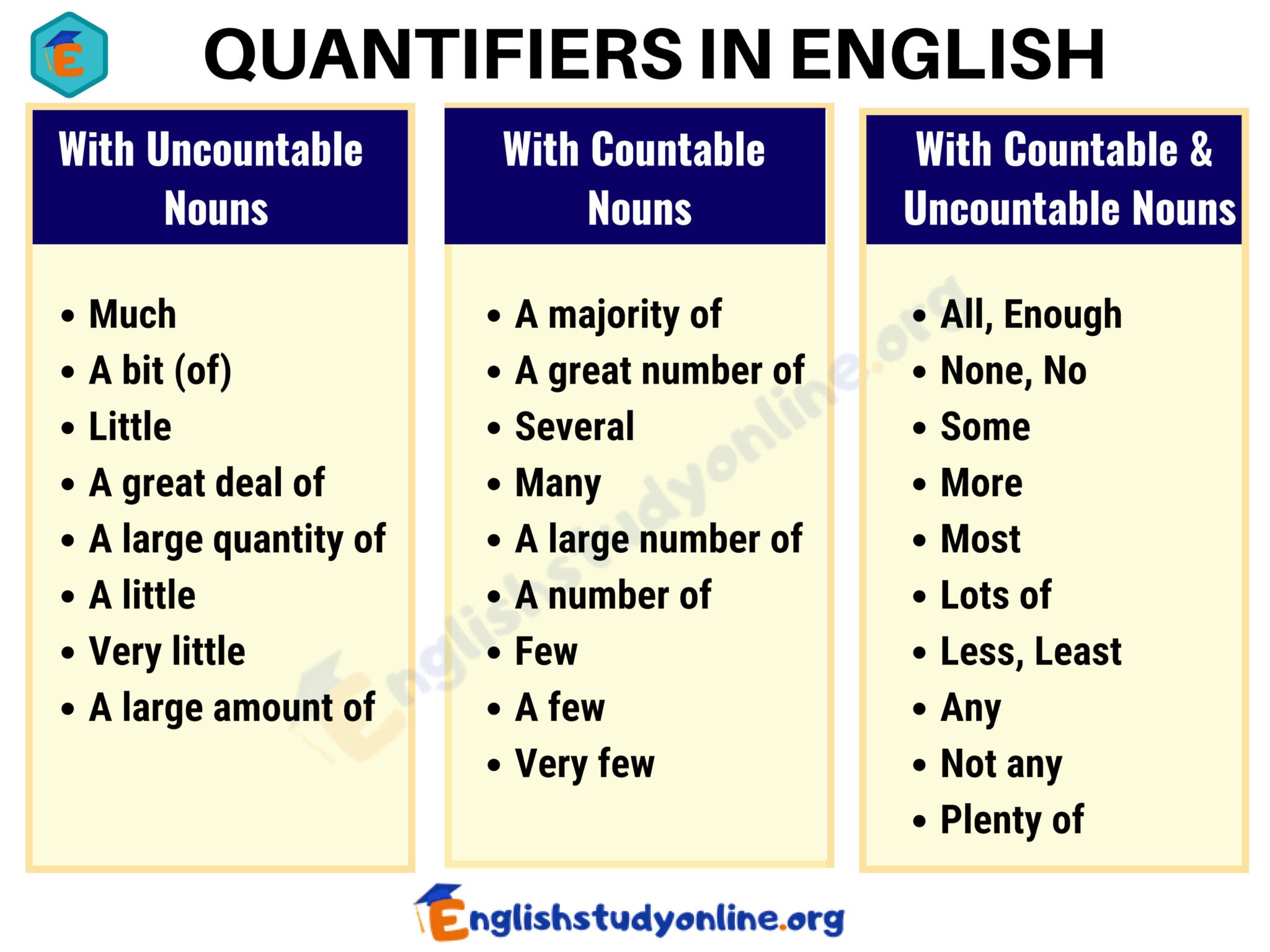 The general rule is that any is used for questions and negatives while some is used for positive.

Both may be used with countable and uncountable nouns.

Do we need any rice?

No, we don’t need any rice.

We have some rice in the cupboard.

some is used in positive sentences:

Some may also be used for questions, typically offers and requests, if we think the answer will be positive.

May I have some more chocolate?

We can use some in questions when offering/requesting:

We use any in positive sentences when we mean it doesn’t matter which ..:

These work in the same way as some and any.

Do we have much time?

Were there many people at the party?

A lot of is used for positive.

There were a lot of people at the party.

Again, much and many may also be used in questions if the speaker thinks that the answer will be positive.

When any, much/many are used in negative sentences, the verb is in the negative form. It is also possible to produce negative by using no or none.

There weren’t any people in the restaurant.

There were no people at the restaurant.

Were there any problems during the project?

A little, A few (positive effect)

Use a little for non-countable nouns (e.g., jam, time). Use a few if the noun is countable (e.g., jars of jam, students).

Mary said nothing, but she drank some tea and ate a little bread.

We stayed a few days in Florence and visited the museums.

Examples for a little / a few

We can use (a) little and (a) few as pronouns. We can use them to substitute for a noun when it is obvious from the context:

After that, she began to tell them a little about her life in Scotland, particularly her life with the Rosenblooms.

I’m not very happy about it but I suppose I have little choice.

Few cities anywhere in Europe can match the cultural richness of Berlin.

[talking about a period of history]

At that time few people travelled who didn’t have to.

“So” and “such” are used to add emphasis, to show extreme emotions or to give an opinion on something. The difference between the two is in their use within the structure of the sentence.

Enough implies a sufficient quantity; it is used in affirmations, negations and questions.

I’ve done enough work for one day.
There were enough strong men to move the fallen tree.
We can get tickets for the concert, I’ve got enough money now.
Have you got enough money for the tickets?
No, I haven’t got enough.Enough can be used as a quantifier when it is placed before any noun, to indicate the quantity required or necessary. It can be used in both affirmative and negative sentences.

enough as a quantifier adjective preceding a noun, as in

“So” can be used with quantifiers to indicate extremes in quantity, but it is important to remember the rules regarding the uses of quantifiers, countable and uncountable nouns, singulars and plurals.

Plenty/Plenty of( Stronger than, ‘enough’)

plenty and plenty of signifies enough and more of a noun.

I have lots of peanut butter left in this jar.

We use plenty as a pronoun to mean ‘enough’ or ‘more than enough’:

How much money do you think I need to bring with me?

About one hundred pounds should be plenty.

[A is pouring milk into B’s coffee]

The cardinal numbers (one, two, three, etc.) are adjectives referring to quantity, and the ordinal numbers (first, second, third, etc.) refer to distribution.

Read decimals aloud in English by pronouncing the decimal point as “point”, then read each digit individually. Money is not read this way.

Percentages are easy to read aloud in English. Just say the number and then add the word “percent”.

To read a sum of money, first read the whole number, then add the currency name. If there is a decimal, follow with the decimal pronounced as a whole number, and if coinage has a name in the currency, add that word at the end. Note that normal decimals are not read in this way. These rules only apply to currency.

Just read out the number, followed by the unit of measurement, which will often be abbreviated in the written form.

Interestingly, these rules apply to reading street addresses as well.

There are several ways to pronounce the number 0, used in different contexts. Unfortunately, usage varies between different English-speaking countries. These pronunciations apply to American English.