This unit is about Clause, phrase and sentence, the differences between the three and how they are applied in English grammar. 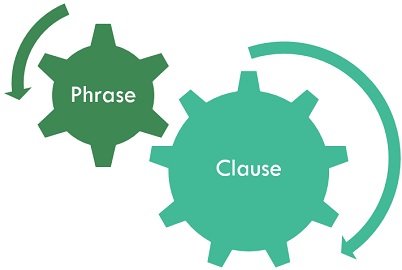 Phrases, Clauses and Sentences are the most important structural units of language. They provide structure and meaning to almost all the languages. The phrases and clauses provide a sense to a sentence. Here we will discuss this and learn about the constituents of a sentence structure with the help of interesting example sentence for each.

The basic unit of English grammar is the clause:

[when he left it in the waiting room of a London station.]

[William Brown inherited the 1698 Stradivarius violin from his mother]

Clauses are made up of phrases:

What is a clause?

Clauses are groups of words that have both subjects and predicates. Unlike phrases, a clause can sometimes act as a sentence – this type of clause is called an independent clause. This isn’t always the case, and some clauses can’t be used on their own – these are called subordinate clauses, and need to be used with an independent clause to complete their meaning.

While the independent clause could be used by itself as a complete sentence, the subordinate clause could not. For it to be correct, it would need to be paired with another clause: “When the man broke into the house, the dog barked at him.”

All clauses in English have at least two parts: a noun phrase and a verb phrase:

But most clauses have more than two parts:

The first noun phrase is the subject of the sentence:

The children laughed.
John wanted a new bicycle.
All the girls are learning English.
She put the flowers in the vase.

English clauses always have a subject:

His father has just retired. Was a teacher. He was a teacher.
I’m waiting for my wife. Is late. She is late.

… except for the imperative which is used to give orders:

If we have no other subject we use “there” or “it” as subject. We call this a ‘dummy subject’:

There were twenty people at the meeting..
There will be an eclipse of the moon tonight.

It’s a lovely day.
It’s nearly one o’clock.
I have toothache. It hurts a lot

What is a sentence?

More complex sentences can combine multiple clauses or phrases to add additional information about what is described. Clauses may be combined using conjunctions – such as “and”, “but” and “or”.

E.g. “He went out to dinner but didn’t enjoy the meal.”

This example is composed of two independent clauses, “he went out to dinner” and “he didn’t enjoy the meal”, combined with a conjunction- “but”.

We can join two or more clauses together to make sentences.

An unlucky student almost lost a 17th century violin worth almost £200,000 when he left it in the waiting room of a London station.

William Brown inherited the 1698 Stradivarius violin from his mother and had just had it valued by a London dealer at £180,000.

Examples:
She is hungry.
I am feeling well today.

What is a phrase?

Words can be grouped together, but without a subject or a verb. This is called a phrase.

Because a phrase has neither subject nor verb, it can’t form a ‘predicate’. This is a structure that must contain a verb, and it tells you something about what the subject is doing.

Phrases can be very short – or quite long. Two examples of phrases are:

“Waiting for the rain to stop”.

Phrases can’t be used alone, but you can use them as part of a sentence, where they are used as parts of speech.

Often a noun phrase is just a noun or a pronoun:

People like to have money.
I am tired.
It is getting late.

or a determiner and a noun …:

Our friends have bought a house in the village.
Those houses are very expensive.

… perhaps with an adjective:

Our closest friends have just bought a new house in the village.

Sometimes the noun phrase begins with a quantifier:

All those children go to school here.
Both of my younger brothers are married
Some people spend a lot of money.

Quantifiers come before determiners, but numbers come after determiners:

So the noun phrase is built up in this way:

The noun phrase can be quite complicated: