This unit is about Graciation where the glaciers and ice sheets together with their effects of erosion and deposition onto the landscape.

Glaciation refers to the form and growth of the glaciers and ice sheets together with their effects erosion and deposition onto the landscape.

Deglaciation describes the transition from full glacial conditions during ice ages, to warm interglacials, characterized by global warming and sea-level rise due to change in continental ice volume.

Both Glaciation and Deglaciation processes comprise and exist during the rising age.

The list of which occurred during the period of Pleistocene.

The exact causes are not well established but its thought by scholars, geographers, scientific that glaciations is included by the following

The collision of starts planet within the universe as they move in space plus the disintegration of some of these starts through Radioactive decay releases large quantities of cosmic dust meteorites.

When the cosmic dust as given out, they are the ones responsible for the reflect the sun’s rays (heat) back to the outer space.

The sun’s rays that would have been received by the earth’s surface one: reduced to the minimum.

These cosmic dust also absorb much of the sun’s energy with the overall effect of reducing the earth’s temps significantly.

The Ellipticity of the Earth’s Orbit

When the areas are four from the sun, this implies that the sun’s rays will have to travel through the longer distance thus reducing net energy received.

Where these mountain-building processes have taken place such as the Himalayas, Alps, the Rockies etc.

Atmosphere circulation as affected in that wind merits across such mountains /barriers are made difficult for e.g. the warm winds from the topics don’t easily cross the Himalayas.

For local limps in E. Africa we have the following:

Resulted into the form of high relief features that is a block and volcanic mountains plus that E.Africa plateau.

These high relief features ideal for rain form which is the major of H20 vapor in the atmosphere and precipitations generally is also realized inform the snow.

During the Pleistocene period, the atmosphere was filled with volcanic dust, these dust acted as condensation nuclei which facilitate the formation of crystals that join together to form clouds and what happened to us as before.

There are other complicated theories that attempt to explain the cause of glaciations in E.Africa and the world at large.

GLACIERS AND MODE OF FORMATION

valley in moves firm higher slopes to lower ones.

A glacier as formed through the following stages.

Water vapour from the seas, lakes, Rivers, and plants drawn and condensed to form snow above the snowlines.

The weight from above caused by successive snowfall creates pressure and this causes water molecules to escape from the snow (in gaseous form) a process known as sublimation.

As water molecules escape from the snow time granules of the snow are compressed Dover as more snowfalls.

When a lot of pressure is applied from above of the continuous snowfall, some of the granules melt and thus tackles downwards through the porous snow and freezes at the base levels and this eventually from a body of glaciers.

THE TYPES OF GLACIERS

The valley glacier is known as the valley Alpine or mt glacier.

This originates from the accumulation basin and occupy pre-existing Rivers valleys and are induced to move downslope by Gravity.

When several valley glaciers meet at a lower ground level they are known as piedmont glaciers.

These are broad mt like masses of glacier covering several hundred and several thousand kilometers.

Indirectly, glacier affects the land space through meltwaters that originate from the ice front.

The material carried by a glacier is derived from the weathering processes or form landscape and sea types of mass movements. Among the processes we have.

When ice flows across a bedrock surface. It may lift large blocks from a fractural or a jointed floor. and move them off. This process is known as plucky or quarrying.

Sometimes this lifting of blocks from the fractural or the jointed flow may be aided by pressure at great depth.

At high-pressure points, the h20 that melts trickles to lower pressure areas especially are cracks within the rocks and it will eventually freeze.

This will form a bond between the glacier and the rocks and with time the cracks will widen because of stress and strains on the walls.

As moving ice drags rocks, pebbles, boulders, sand etc across the glacier floor, Abrasion takes place whereby the rock floor is cut (smoothened) as if by a file and the cutting tools are themselves worn down.

Furthermore, Abrasion leaves scratches and striation on the floor rock and grinding tools have fine striation.

The resistance of the rocks to erosion.

The rocks that comprise the parent rock may either be weak or resistant hence influencing the rate of erosion.

The speed of the glacier.

If the speed is high it means that there is much more energy available for eroding the rocks surface and vice versa.

The thickness and weight of the glacier, also determines the rate of glacial erosion.

If the glacier is very thick, it means that all that weight from above will cause high pressure on the rock surface thus providing much energy for the glacier to cut deeper into the rock. Flow and also to plane off valley sides.

Availability of the rock debris.

If the supply of the debris is high then the rate of erosion will also be high because there are tools to use in the wearing down off the rock surface.

Availability of the rock debris.

LANDFORMS DUE TO GLACIAL ACTIVITY

When considering any glacial landforms, it’s important to remember that its formation took place hundred the thousands of years during which ice two retreated and advanced several times.

In E. Africa they are confined to the highland i.e. on Mt. Kenya, Rwenzori and Kilimanjaro.

Due to Basal sapping, rocks in glaciated highlands break up by alternate freezing and thawing of water in joints of rocks between the glaciers and valley sides.

These frozen rocks tear away by plucking leading to the formation of cirques which are semi-circular and in the shape of an armchair e.g. Bujuku, Batalha, on-mountain in Rwenzori and Nyamindi, Rupingazi, Nanyuki etc on mountain Kenya.

Formation of a cirque by erosional processes 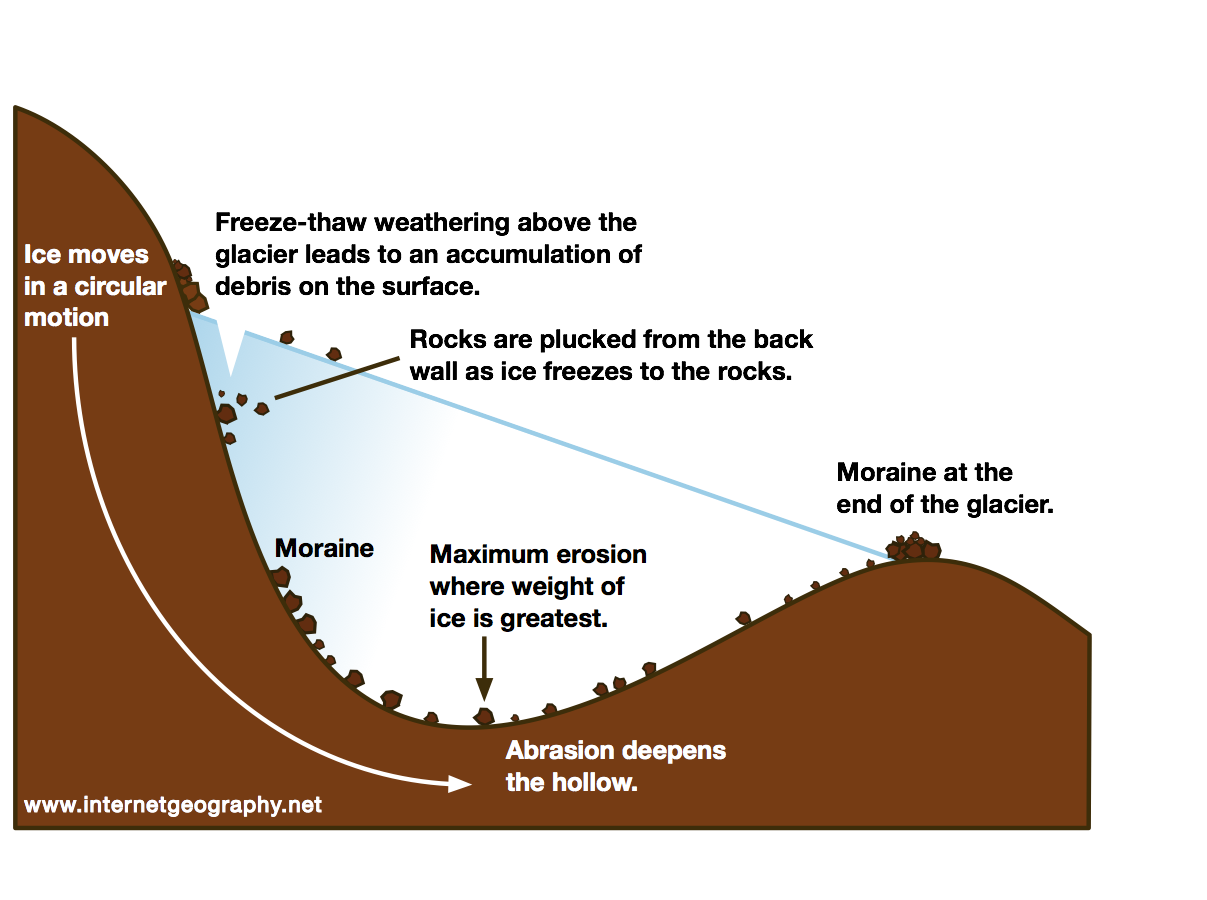 Abrasion also leads to the formation of cirque as rock embedded in the glacier wear away the valley floor by their scouring action as the glacier moves. 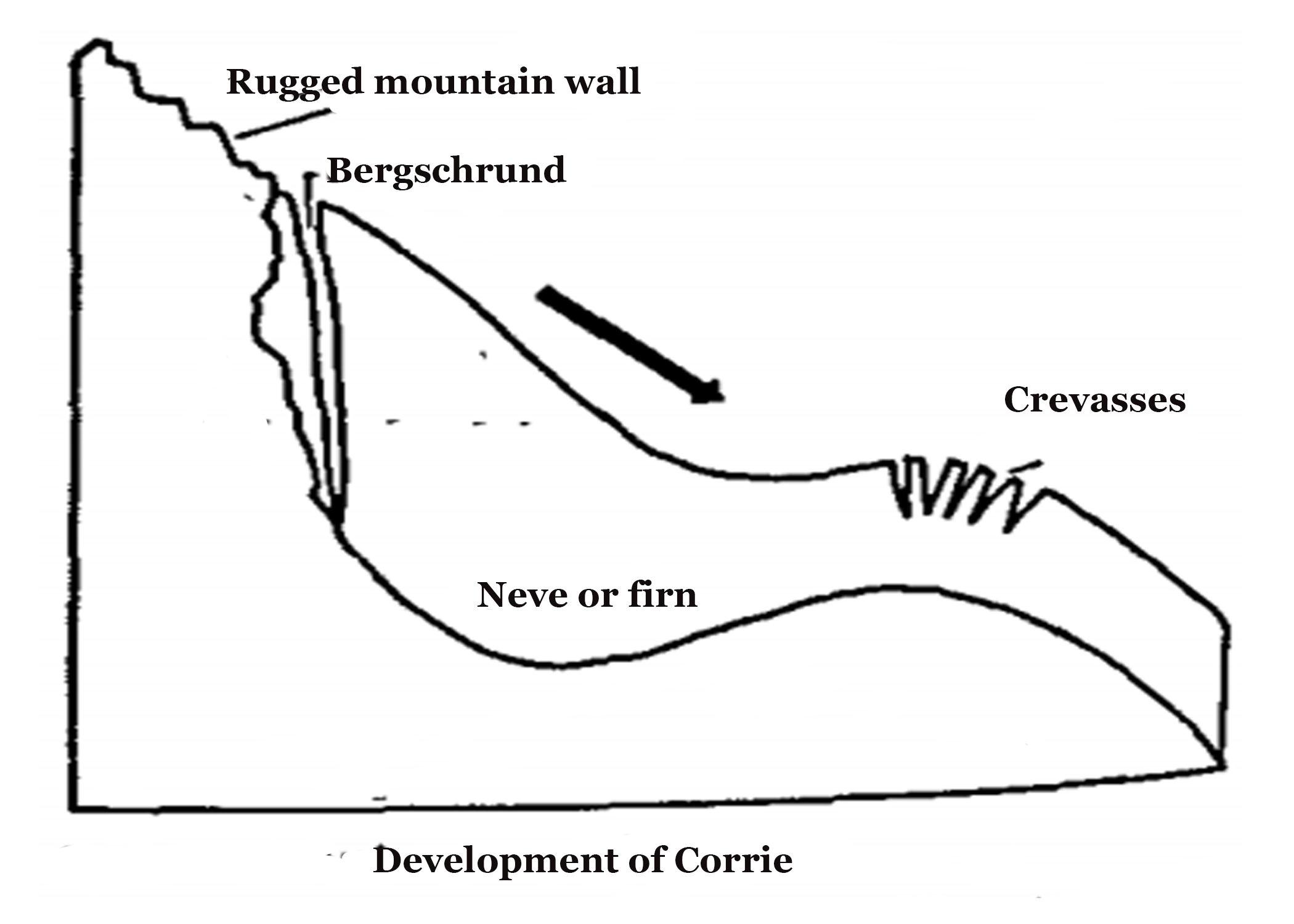 A steep-sided knife-edged separating two Trans. And formed by the cutting back of the back walls of the cirque by plucking.

A jagged peak formed by the steepening of the bark walls of several cirques which lie on the sides of a mountain. These peaks become sharpened by fast action.

As a glacier develops in a river valley, the accumulation of ice at the end together with that from the tributary glacier entering the main valley gives the glacier increased erosive power.

This results in the glacier deepening, straightening and widening the valley.

The upper slopes of the River Valley lying above the glacier surface are left intact and after the glacier melts, they form benches or Alps.

The ends of spur are planed off turning them into truncated spurs and the flow of the valley is deepened and its sides are steepened.

Vertical erosion of the main valley by its glacier is greater than that of a tributary valley which contains only small glacier or no glacier at all.

When the main glacier melts the tributary is left hanging. If a river occupies the hanging valley, it plunges as a waterfall to the flows of the main valley and sometimes it builds an alluvial fan of course materials.