This unit is about Conduction as a form of heat transfer.

Heat is transmitted from a hatter to a cooler part of the body until thermal equilibrium is reached.

Heat flows by one of the following processes, convection, radiation and conduction.

It is a mode of heat transfer that requires a material medium where heat flows from a hotter to a cooler part of the body without movement of bulk.

Heat is transferred by the movement of molecules or though molecules

The theory can be used to explain conduction in substances; when one part of the bodies heated the molecules vibrate in their positions as they vibrate, they keep hitting the neighboring molecules to which they pass heat energy.

The neighbors also vibrate passing on the heat to the next molecules.

This continues until the heat gets to the extreme end of the body. 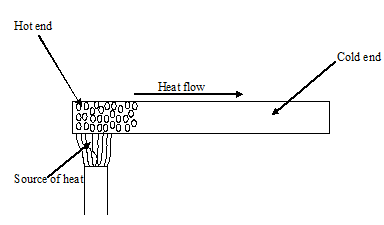 Conductors transfer these vibrations [good heat] but poor conductors/ insulators do not.

Poor conductors/ insulators are substances that do not conduct heat i.e. through which heat does not flow. 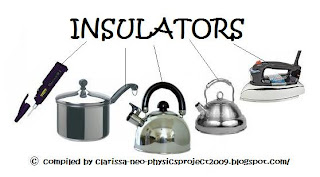 – Where as cooking utensils are made of good conductors, their handless are made of insulators. E.g. handles of kettles, saucepans, electric or charcoal irons are made of either wood or plastic.

– Air is also a good insulator so same houses are made with cavity walls to keep warmth in winter and cool in summer.

– Materials which trap for lagging e.g. in water pipes, ovens and refrigerators, these is because they are bad conductors of heat.

– Metals are good conductors of heat because they have free electrons which wonder around the metal passing on the heat from one point of the body to another, rising the temperature of the cooler parts.

All metals conduct heat but act different rates. Some are very good conductors lie have a high thermal conductivity while others are slow at conducting heat, where as others are poor conductors.

World is a poor conductors of heat; therefore has a very high thermal conductivity.

Metals rods of the same length and diameter are used. They are all dipped in molten paraffin wax and removed to form a solidified wax coating on them.

The end of the rods of the basin is headed by the water to the same temperature.

From the diagram, wood does not conduct heat, where as copper has the highest thermal conductivity as it conducts the heat fastest.

Liquids except mercury and other liquid match or [metals in liquid] state do not conduct heat. To show that water is a poor conductor of heat. A test tube filled with water, an air block wrapped in gauze and a source of heat is used. 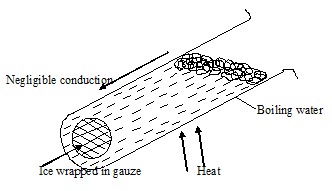 The gauze in which ice wrapped is to help make the ice block sink at bottom of the water in the tube.

The water is heated at the test top of the test tube as shown in the diagrams. The water at the top is seen to boil vigorously while the ice block at the bottom remains un melted.

This shows that the heat is not conducted down through the water 10 melt the ice test tube is also not enough to melt the ice.

Water is therefore a poor conductor of heat.