This unit introduces you to heat in ordinary Level Physics.

Heat is a form of energy that causes a rise in temperature and temperature is the degree of hotness or coldness of a substances.

The size of a solid increase in all directions whenever it’s heated and this increase is called expansion.

The ball and ring experiment

To show the solids expand, the marketing with a metallic ball which just passes through it are used. 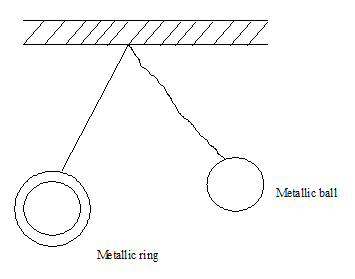 The above experiment shows that solids expand on heating and contract on cooling.

Different metals expand by different heights when equally heated. This can be shown by using two identical metal strips riveted together.

This is called a bimetallic strip and is defined as a bar made of two identical metallic strips riveted together.

The strip is normally made of brass and iron or copper and iron. When t is heated it bends as shown in the diagram. 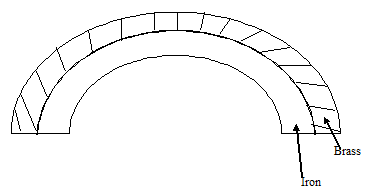 APPLICATIONS OF A BIMETALLIC STRIP

We may also refer to this as the electric bell. 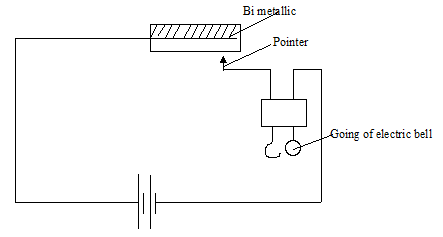 In case of a fire outbreak, heat from the fire causes the bimetallic strip to expand and bend. On bending it touches the pointer; this completes the circuit and sets the going on. 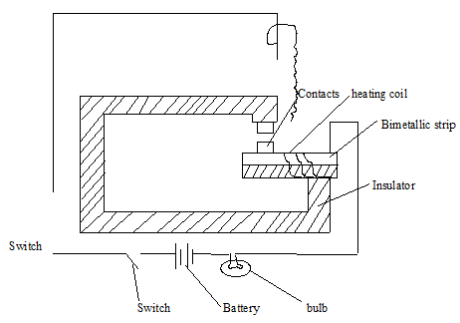 The bimetallic strip and the heating coil are connected in series with the bulb.

When the switch is closed, current passes through the coil but because it has a high resistant the current flowing is not enough to light the bulb though it is enough to heat the strip

When the strip warms, it expands and bends upwards closing the contacts. This shorts out the heating oil and the current flowing through the circuit now is enough to light up the bulb.

The coil immediately begins to pull and after a short interval the contacts open and the cycle repeated.

The flasher unit is mainly used in car indicators. 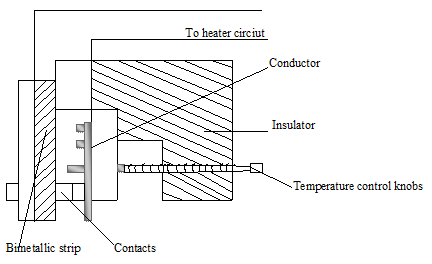 A thermostat is a device used for maintaining steady temperature. It may be used in an electric iron, of hot water storage tank, refrigerators, ovens, aquaria for fish e.t.c.

The diagram above shows a thermostat used for controlling steady temperature in a room warmed by an electric heater.

The heater circuit is completed though the silver contacts. One is attached to the bimetallic strip and the other to the metal strip [conductor]

When the room gets hot the bimetallic strip expands and bends. The contacts then separate and current is cut off.

When the bimetallic strip cools contact is remade and the heating circuit is switched on again.

THIS VIDEO IS ABOUT HEAT AND ITS TRANSFER.