BIO1: INSECTS AND THEIR CYCLE

This unit shows you the lifecycle of insects, their characteristics and some videos to show it better. 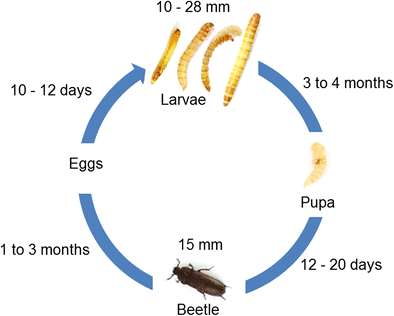 INSECTS AND THEIR CYCLE

Drosophilae or fruit flies are common on foods like bananas, jackfruit, oranges or food remains in the environment. Most of the time human beings strive to destroy them, especially when found inside their houses but ignore the butterflies, cockroaches and sometimes houseflies. On the other hand, poultry birds welcome the fruit flies in addition to other insects as a source of food. In your opinion, what are the features of the fruit fly’s life cycle that promote economic development and which ones are harmful?

Insects are part of a bigger animal group called arthropods. The word Arthropod literally means jointed limbs. The arthropods are the first animal group to have jointed legs.

They have six legs. They have three body parts, a head, a thorax and an abdomen. They have wings. They are by far the largest animal group. They also have an outer or exoskeleton made of a substance called chitin.

There are over 700, 000 species of insects. While they are relatively small in size compared to many animal groups, they are well adapted to their environments. Most insects live on land.

All insects grow from eggs. They go through various stages until they reach adulthood. This transformation through these stages is called metamorphosis. Insects undergo either complete or incomplete metamorphosis.

The dragonfly, termite, grasshopper and true bug undergo incomplete metamorphosis. In this process there are three stages called egg, nymph and adult. When the nymph hatches from the egg, it looks like the adult insect except it is smaller, has no wings and cannot reproduce yet. As the nymph grows it outgrows its outside skeleton and it is shed. It then regrows a new one. This happens several times before it finally becomes an adult.

Insects like the butterfly, bee, ant, beetle and fly undergo complete metamorphosis. This involves four stages: egg, larvae, pupae and adult. The larvae look like a worm and hatches from the egg. As it grows, it also sheds it skin. It then grows into a pupa. While the pupa doesn’t move around like the larva, it does eventually at this stage change from an immature form to adult form.

There is another group within the arthropods called the arachnids. The arachnids are spiders, scorpions, etc. The annelids are similar to insects. However, they have eight legs. Their wings are quite different from those of the insects.

The main disadvantage of the exoskeleton is that it can’t expand with growth. In order for growth to take place, the exoskeleton must be shed and a new one formed. The new one will be soft at first, so the body must be expanded before the new one hardens. The organism can then grow to fill the space created before moulting becomes necessary again.

The process of moulting is called ecdysis, and the stage between successive moults an instar. Once adulthood has been reached, growth ceases and the adult insect doesn’t moult again. This means that the stages occurring before the adult are the ones in which growth occurs.

this is shown by the less highly developed insects. The life cycle shows only three stages:-
EGG – NYMPH – ADULT
The nymph resembles a miniature adult but is not able to produce young. This life cycle has the disadvantage that both nymph and adult often share the same food source. Therefore they can be in direct competition with one another for food. The advantage is that the vulnerable pupa (chrysalis) phase is avoided. The wings develop during the nymph stages as wing buds. These grow larger at each successive instar. They are fully formed at the final moult into adulthood. The wings therefore develop outside the body and are said to be exopterygote. This type of life cycle is seen in various insects, including dragonflies, grasshoppers, earwigs, cockroaches and true bugs:-

This is shown by the more highly developed insects. The life cycle shows four stages:-
EGG – LARVA – PUPA – ADULT
The larva (or caterpillar) is the growth phase. It is generally very different from the adult. Usually the larva and adult use different food sources. Therefore they are not in direct competition. This is a distinct advantage as more individuals of the species can be fed.

The pupa (or chrysalis) is a stage of internal reorganization. There are no visible signs on the outside of the body as to the activity within. Because of this the pupa phase used to be called the “resting” stage. During the pupa phase the internal organs are broken down, more or less forming a “soup”. This “soup” then acts as food for special growth buds to develop.

These form the adult body. When reorganization is complete, the adult is ready to emerge. When outside conditions are suitable, the final moult occurs and the adult insect emerges. The wings develop inside the pupa case. Therefore this type of development is said to be endopterygote. Such a life cycle is shown by butterflies, moths, bees, wasps, true flies and many other insects, including beetles:-
Diagrams of Complete Metamorphosis