This unit covers the four primary types of economic systems in the world: traditional, command, market and mixed. Each economy has its strengths and weaknesses, its sub-economies and tendencies, and, of course, a troubled history. It examines each system in turn and gives ample attention to the attributes listed above. 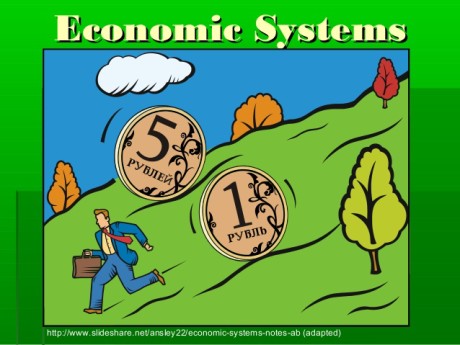 It’s important to understand how different parts of the world function economically, as the economy is one of the strongest forces when it comes to balancing political power, instigating war and delivering a high (or low) quality of life to the people it serves.

A traditional economic system is the best place to start because it is, quite literally, the most traditional and ancient type of economy in the world. There are certain elements of a traditional economy that those in more advanced economies, such as Mixed, would like to see return to prominence.

Where Tradition Is Cherished: Traditional economies still produce products and services that are a direct result of their beliefs, customs, traditions, religions, etc. Vast portions of the world still function under a traditional economic system. These areas tend to be rural, second- or third-world, and closely tied to the land, usually through farming. However, there is an increasingly small population of nomadic peoples, and while their economies are certainly traditional, they often interact with other economies in order to sell, trade, barter, etc. Learn about the complexities of globalization and how it shapes economic relationships and affects cultures with this great class on the geography of globalization.

Minimal Waste: Traditional economies would never, ever, in a million years see the type of profit or surplus that results from a market or mixed economy. In general, surplus is a rare thing. A third-world and/or indigenous country does not have the resources necessary (or if they do, they are controlled by wealthier economies, often by force), and in many cases any surplus is either distributed, wasted, or paid to some authority that has been given power.

Advantages And Disadvantages: Certainly one of the most obvious advantages is that tradition and custom is preserved while it is virtually non-existant in market/mixed economies. There is also the fact that each member of a traditional economy has a more specific and pronounced role, and these societies are often very close-knit and socially satisfied. The main disadvantage is that traditional economies do not enjoy the things other economies take for granted: Western medicine, centralized utilities, technology, etc. But as anyone in America can attest, these things do not guarantee happiness, peace, social or, most ironically of all, economic stability.

In terms of economic advancement, the command economic system is the next step up from a traditional economy. This by no means indicates that it is fairer or an exact improvement; there are many things fundamentally wrong with a command economy.

Centralized Control: The most notable feature of a command economy is that a large part of the economic system is controlled by a centralized power; often, a federal government. This kind of economy tends to develop when a country finds itself in possession of a very large amount of valuable resource(s). The government then steps in and regulates the resource(s). Often the government will own everything involved in the industrial process, from the equipment to the facilities.

Interested in earning CFA certification? Get all the training you need from this CFA Level 1 Economics curriculum.

Supposed Advantages: You can see how this kind of economy would, over time, create unrest among the general population. But there are actually several potential advantages, as long as the government uses intelligent regulations. First of all, a command economy is capable of creating a healthy supply of its own resources and it generally rewards its own people with affordable prices (but because it is ultimately regulated by the government, it is ultimately priced by the government). Still, there is often no shortage of jobs as the government functions similarly to a market economy in that it wants to grow and grow upon its populace.

Hand In The Cookie Jar: Interestingly – or maybe, predictably – the government in a command economy only desires to control its most valuable resources. Other things, like agriculture, are left to be regulated and run by the people. This is the nature of a command economy and many communist governments fall into this category.

You should also consider this micro and macro economics program. It’s been approved by the CFA institute and focuses on the impact of economic variables on the financial market and industry.

A market economy is very similar to a free market. The government does not control vital resources, valuable goods or any other major segment of the economy. In this way, organizations run by the people determine how the economy runs, how supply is generated, what demands are necessary, etc.

Capitalism And Socialism: No truly free market economy exists in the world. For example, while America is a capitalist nation, our government still regulates (or attempts to regulate) fair trade, government programs, moral business, monopolies, etc. etc. The advantage to capitalism is you can have an explosive economy that is very well controlled and relatively safe. This would be contrasted to socialism, in which the government (like a command economy) controls and owns the most profitable and vital industries but allows the rest of the market to operate freely; that is, price is allowed to fluctuate freely based on supply and demand. If you want to know how the global economy works and the role you play in it, check out this sweet class on Economics Without Boundaries.

Market Economy And Politics: Arguably the biggest advantage to a market economy (at least, outside of economic benefits) is the separation of the market and the government. This prevents the government from becoming too powerful, too controlling and too similar to the governments of the world that oppress their people while living lavishly on controlled resources. In the same way that separation of church and state has been to vital to America’s social success, so has a separation of market and state been vital to our economic success. Yes, there is something wary about a system which to be successful must foster constant growth, but as a result progress and innovation have occurred at such incredible rates as to affect the way the world economy functions.

A mixed economic system (also known as a Dual Economy) is just like it sounds (a combination of economic systems), but it primarily refers to a mixture of a market and command economy (for obvious reasons, a traditional economy does not typically mix well). As you can imagine, many variations exist, with some mixed economies being primarily free markets and others being strongly controlled by the government. Learn more about an essential part of our economy with this free post on understanding the stock market.

Benefits Of A Mixed Economy: In the most common types of mixed economies, the market is more or less free of government ownership except for a few key areas. These areas are usually not the resources that a command economy controls. Instead, as in America, they are the government programs such as education, transportation, USPS, etc. While all of these industries also exist in the private sector in America, this is not always the case for a mixed economy.

Disadvantages Of A Mixed Economy: While a mixed economy can lead to incredible results (America being the obvious example), it can also suffer from similar downfalls found in other economies. For example, the last hundred years in America has seen a rise in government power. Not just in imposing laws and regulations, but in actually gaining control, becoming more difficult to access while simultaneously becoming less flexible. This is a common tendency of mixed economies.

Please Respect The Thin Line: A current, pivotal debate between Democrats and Republicans is the amount of governmental control. Can a true balance exist? Where should there be more government regulation? Where should there be less? These questions have no real answer; it is subjective, and therefore only a relatively small portion of the population will, at any given time, agree with the state of a mixed economy. It must be a strong form of government indeed to avoid collapsing under this constant pressure.

Now that you have a general idea of how the world’s economies function, you can see how some countries are light-years behind others. But the progress of first-world nations allows slower economies to make faster, longer strides. In fact, there is even reason to hope: several initiatives have been implemented in the past ten years that are helping developing countries avoid making the same mistakes we made: pollution, depletion of resources, civil rights, etc.

Anyone interested in economics on a global level should check out this fantastic course on the crisis of capitalism and why the global economy is teetering on the verge of collapse.

You can also Learn more about your own government and economy through this link top-rated course on how the economy really works in the 21st century.

You can watch the video below about the World Economic Systems and learn more.