This Unit is about the Kabaka Crisis and Political parties. 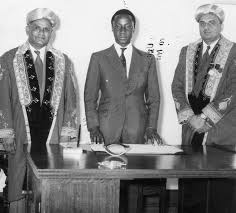 Why was Kabaka Muteesa exiled in 1953

Why did Buganda Lukiiko refuse to send representatives of Legco?

They wanted Buganda to remain an independent state.

They thought that joining Legco would make Lukiiko weaker.

In 1953, Sir Edward Muteesa I was exiled to Britain by Sir Andrew Cohen a British Governor.

This led to more political unrest in Buganda.

This led to what was known as Constitutional Crisis.

How did Buganda reacted towards exiling of Sir Edward Muteesa II?

The Uganda National Movement was led by Augustine Kamya.

It was held in 1954 to organize for the Kabaka’s return.

Which Agreement was signed in Buganda for Kabaka’s return?

Why was Namirembe Conference Agreement held/signed?

To organize for the Kabaka’s return to Buganda.

The Namirembe Agreement made some changes in 1900 Buganda Agreement.

Who signed the Namirembe Agreement on behalf of?

To celebrate the return of Kabaka Edward Mutesa II

Name the British officer who exiled Muteesa II in 1953

A Political party is an organization uniting people of the same idea with the aim of ruling a country.

Reasons why political parties were formed

To unite people to fight for independence.

The following political parties were formed before independence.

Musaazi became the first president of the General Party in 1954.

i) To fight for Uganda’s independence.

ii) To unite all Ugandans.

How did I.K. Musaazi contribute towards the independence of Uganda?

I.K. Musaazi joined Uganda Peoples Congress after the collapse of his party.

It was founded by Joseph Kasolo

The next leader of DP was Ben Kiwanuka.

i) He was first chief of Minister of Uganda.

ii) He made DP a political party.

iii) He was the first Ugandan chief Justice

v) He fought for Uganda’s independence.

The UCP were in supportive to the   government and traditional leaders.

UPC was led by Milton Obote

The major aim of UPC was to lead Uganda to independence.

The Kabaka Yekka was founded mainly to protect the interests of Buganda.

This was not possible without support of regions of Uganda.

As a result KY made an alliance government with UPC

The alliance gave strength to UPC.

Points that were agreed in Lanchestor.

The leader of the government was Prime Minister.

Lukiiko was to elect Buganda representative of Legco.

The wild committee was set up in November 1958 to prepare Uganda for independence and elections in 1961.

The wild committee was to decide rules by Ugandans would choose their independent country.

What contribution was made by the wild committee?