This unit dwells on livestock farming in different geographical areas

This includes Normadism, ranching and dairy farming. It’s mainly carried out in Masai land by the Nuba in Ethiopia and Sudan, Tuareg in Sahara, Fulani in west Africa, Hottentots in South Africa, Bedious in Arabia and some parts of Turkey central Asia and Siberia.

– Seasonal movements; this depends on the local climate for type of animals kept. It may be a constant pattern of movement to one area of pasture to another area from one water hole to another

– Animals kept; there is various animals kept and each nomadic group keeps the types that are best suitable for their environment.

In the tropical areas of Africa, cattle are dominant while goats are kept in dry areas. In the deserts, camels are very common and turkeys are kept in the mountains of central Asia.

– They mainly depend on their animals for a living. The animals provide them with food, clothing, transport and shelter.

– They grow a few annual crops like millet and beans

– They graze communally and quantity is more important and quality. This is because they regard animals (livestock) as a source of wealth and prestige.

– Their settlements are temporary and usually made of grass (grass-thatched houses) or they could be tents.

– Most of their animal productions are for home consumption and are surplus is sold off in order to buy their basic requirements.

– They are mostly found in sparsely populated areas where the movement is allowed that is to say; Sahara desert.

–The grass is poor due low and unreliable rainfall. The grass dries up especially during the dry season. It is also the poor quality with a coarse texture.

–Lack of veterinary services (assistance) because of the remoteness of these areas.

–There is limited capital from the government to construct boreholes and buy drugs.

–Most pastoral areas are far from the main trading areas and therefore the farmers face a top problem when they want to transport their products.

–There is overstocking resulting into overgrazing and this leads to soil erosion.

Solutions to the problems

-Educate farmers against the idea of quantity but quality

-They should construct boreholes and valley dams which can increase on water supply point.

Drought resistant pasture should also be planted for example Lucerna and star grass to avoid shortage of pastures and water.

-Pests and diseases should be overcome by spraying, dipping inoculation and cutting down trees where tsetse flies live.

-The government should set up good roads connecting to nomadic pastoral areas so that they can easily market their produce.

-The best way of solving all the above problems is to develop ranching schemes and demonstration farms.

At the demonstration farms, the farmers go there with cattle and loan better ways managing and looking after their cattle.

Ranches have been established at Katsina on Nigerian border close to the Fulani lands, Kapatei ranch on the Kenyan border in Masai land. 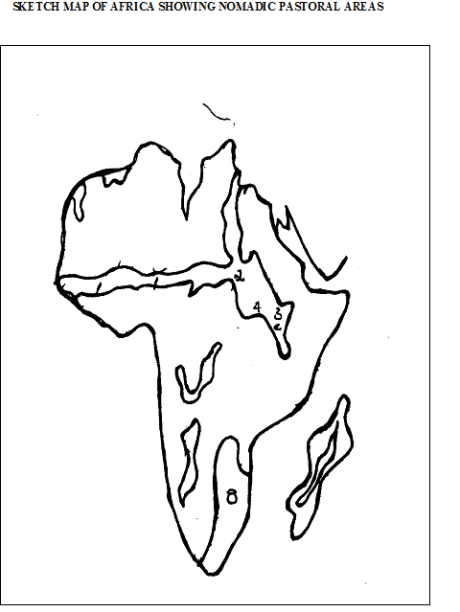 There is the largest group with cattle keepers in Africa and are scattered over a wide area of West Africa. Their life is adapted to their natural conditions or the areas in which they live.

They are characterized by seasonal movements as a result of climatic conditions. The Fulani live in Sahara desert that is to say; experiences long drought season, brought by the searching Northeastern Hamattain winds that is to say; blow in from October 2 March.

The Fulani land is characterized by scattered Baubon palms, better trees and shear nut trees because of the Fulani, home area being located on the finger border of Sahara desert, water shortage and pasture are experienced, the Fulani have adopted their livestock rearing to this environment by moving Northwards in the wet season and south wards in the dry season.

This is similar to nomadic pastoralism in that it involves movement of animals and their herdsman to and from (Mt Slopes) according to the prevailing season in the search for pasture (fresh).

Only that in transhumance it’s mainly characterized on common in highland areas e.g. the Atlas Mountains or West Africa the Alps of Switzerland and Scandinavian highland.

Transhumance in the Swiss Alps:

The Alps, cattle one kept of valleys during winter because the mountains are covered with snow. The animals are kept indoors and they are stock feed.

The valley bottoms are then used for fodder cultivation. When winter sets in again, the cattle is moved down to the barns indoor and they cycle begins again.

Its dominantly carried out in the grassland areas, like the great plains in of north America, pumps of Argentina, the interior lowlands of Australia and North Australia, the velds of South America and the tropical grasslands or Brazil. These animals are mostly kept for beef production.

-The animals are kept on ranch with an organized system or paddocks.

-There is little or no animal migration.

The food supplies are permanent or submarine men with fodder crops were the animals have to move, it’s still on the same ranch from one paddock to another.

In some ranching areas, the animals may be moved occasionally to riches, pastures or fattening areas before you lying for example in the cobalt of North America and Australia.

-The ranches are scientifically managed.

The cattle is characterized or dipped and it’s well looked after and the ranch owner are usually rich and can supply the necessary inputs especially in developed countries, ranches are owned by the government e.g. Congo ranching scheme, etc.

There is continuous vegetation cover it’s either natural or planted with selected grass types like alfalfa, Lucerne, clovers and these are grown throughout the year.

When the vegetation is not available e.g. In winter, the animals are feed with hay, oats and barley. The animals are kept especially for sale. 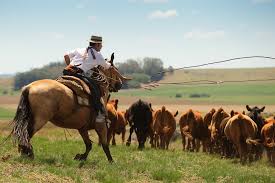 It’s mostly carried in the pumps which have a warm temperate climate and natural grassland. It’s one of the leading livestock areas in the world.

Factors that have favored to it’s grow

-Introduction of alfalfa which is a very nutritious fodder crop

-Availability of skilled labour to effectively manage the farms

-Well-drained fertile soils that lead to the growth of pastures.

-Availability of processing industries which can beef

-The area is well drained so there is adequate water for animals.

-Climate is conducive for the growth of good pasture and keeping animals.

-The use of scientist methods of management

-The cattle are mainly kept in the southeast Pampa in the drier parts of Argentina Toward the quakes cattle is replaced by sheep rearing.

On the cattle ranches (estancias) about 20,000 cattle are kept and when they are ready for slaughter, they taken by railway to the slaughter area of Buenos Aires and Zapanta. They are slaughtered, frozen and canned for export.

LOCATION OF ARGENTINA AND POSITION OF EXTENSIVE RANCHES ON THE PAMPAS 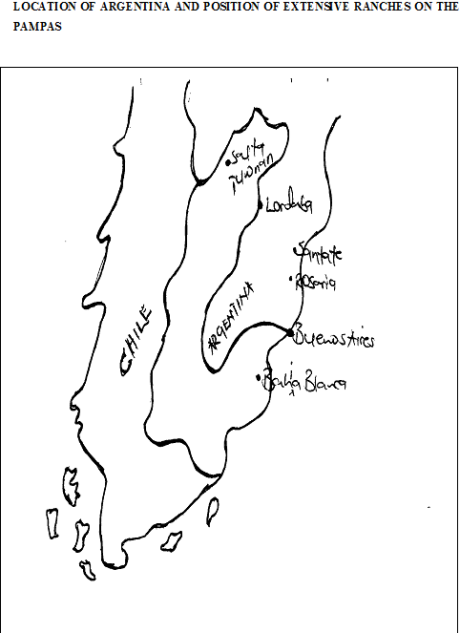 It’s mostly carried out in the savannah lands of the North West and in Queensland. It’s an area receiving highly seasonal rainfall between 400 – 1000mm.

The ranchers are called stations covering many km2, Ha, acres.

The animals are cross breed with exotic breeds

The stations are thinly populated with a permanent settlement for the station owners and the cattle keepers. There are well facilitated the cattle dips and a landing site for light lanes.

The cattle usually have a few feces and they graze in an uncontrolled fashion.

Once upon a while, they are rounded and dipped while the mature ones are taken to the fattening area. Most of their beef is expected or to United Kingdom.

Shortage of water and pasture in the dry season

Lack of transport because most of the ranchers are found far from market places.

Labour is a problem because most of them are found in sparsely populated areas.

Problems of finding a good market for the meat and other products especially in tropical areas because the people are very poor.

The carrying capacity for land is low because a large area is required to feed each animal.

Water supply and the land is divided by the government effort is being put in to develop the range. Thus areas suitable for cattle rearing.

The ranches are not fenced but divided by a ditch due to the Masai ways of life. Most money is used to provide dipping equipment, improved water supply, ethnic assistance, disease control to purchase and local stock.

Government officers have been stained and we helping the Masai to know that have a fairly limited herd of nourished cattle is better to have.

The choice of ranch managers is difficult because each family has a leader and good leadership is rich because it’s a highly skilled business.

Individual herds of Poka are in equal because the rich give a lot of cattle while the poor have very few manual works.

This has led to some areas being overgrazed while others are under hazed.

It is expensive employing outside contractors to construct dips since the Masai are not used to doing manual work.

Both rich and the poor should have an equal amount of cattle so as to avoid over and under grazing in different places.

The government offices have been trained to teach that less herd of good quality is better to keep. 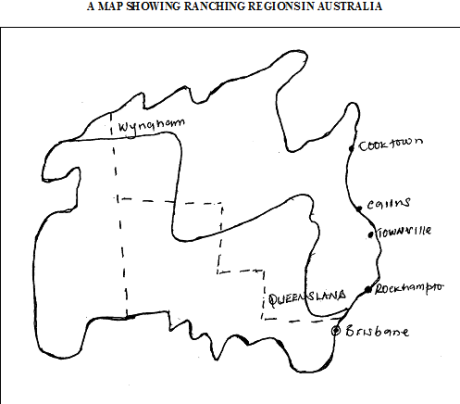