This Unit has Plant Nutrients Magnesium, Calcium and Carbon. 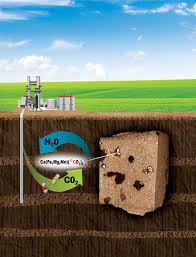 Magnesium is a component of several primary and secondary minerals in the soil, which are essentially insoluble, for agricultural considerations. These materials are the original sources of the soluble or available forms of Mg. Magnesium is also present in relatively soluble forms, and is found in ionic form (Mg++) adhered to the soil colloidal complex. The ionic form is considered to be available to crops.

Ways through which magnesium may be lost in the soil

Calcium is an alkaline metal of Group II A on the periodic chart and is the fifth most abundant element in the earth’s crust while being widely distributed in nature.  The electronic structure of the calcium cation makes it a unique element that is ideally suited to assist in plant growth.

Ways through which calcium can be lost form the soil.

THIS VIDEO EXPLAINS MORE ABOUT CALCIUM IN AGRICULTURE

It is widely accepted that the carbon content of soil is a major factor in its overall health. Soil carbon improves the physical properties of soil. It increases the cation-exchange capacity (CEC) and water-holding capacity of sandy soil, and it contributes to the structural stability of clay soils by helping to bind particles into aggregates. SOM, of which carbon is a major part, holds a great proportion of nutrients cations and trace elements that are of importance to plant growth. It prevents nutrient leaching, and is integral to the organic acids that make minerals available to plants. It also bufferssoil from strong changes in pH.

From the atmosphere as carbondioxide carbonate and hydrogen carbonates when carbonic acid from rain reacts with soil minerals.

Plants are able to take in carbondioxide through their leaves from the atmosphere during sunshine and manufacturer carbohydrates in a process called photosynthesis.

Plants also absorb carbonates and hydrogen carbonates from the soil and use it to build complex carbon compound e.g. the woody tissue.

When animals feed on plants, they take in carbon compounds and use them fore energy as well as building a body tissue.

As plants and animals carry out different metabolic processes they use carbohydrates for energy and respire to give out carbondioxide which returns to the atmosphere.

When plants and animals die and decay as wells as animals excreting they produce humus, some animals excrete may be lost into the sewage and eventually into the water bodies.

Soil micro organisms break down complex carbon compounds from plant and animals residues in the presence of oxygen to get energy for their body use.  In the process, carbondioxide is released and simpler carbon compounds combine with mineral slats from rocks to form carbonates and hydrogen carbonates that can be absorbed by plant roots.

When it rains, rain water can absorb some carbondioxide from the atmosphere to form carbonic acid. This can later be oxidized in the soil to form carbon compounds usable by plants.

Soil moisture. In association with other nutrients soil is always available.