It’s one of the leading producers of rubber around the world. Large positions of is land area are under rubber growing part of the crop is grown on the plantation while the rest is grown on a small holdings.

The plantations are mostly owned by Europeans and the smaller ones by the Chinese while Malaysians own a very small percentage of the estate area.

Factors that have favoured the growing of rubber

High monthly temperatures between 25-28oc. Annual rainfalls should range between 1800, 3000mm with no month receiving less than 750mm.

The rubber growing areas are highly accessible with network of roads and always. These areas are also near to the sea with deep labors such as Penang and swetlenham .

There is availability of enough land since most of the rubber growing areas are almost inhabited.

Cheap and plenty of labour which is obtained from southern Asia (India).

Availability of capital from the Europeans and which estate owners

This is the second most important crop contributing to more than 15% of the country’s export earnings.

Most of the plantations were owned by the Europeans i.e. Brooke bond Labing Company but most of the estate have now been taken over by the government.

The main tea growing areas include: Kericho, Limuru and Kiambu districts which have more than 10 factories.

Tea is also grown in Nandi hills on plantations by small scale farmers in areas like Kiisi, Nyeri and Kakamehga districts.

The tea estates and plantations are under he Kenya development authority which provide advisory services and arrange from the processing and marketing of the crop especially to the out growers.

This is well situated for the growing of the eastern region and is under the management of Europeans.

-High altitude of about 2000 meters

-Availability of labour both skilled and unskilled labour i.e. the ones to harvest (tea picking), clerks and mangers

-Availability of capital which has ensured high levels of mechanization whereby some of the tea is harvested by use of machines.

-Soil exhaustion due to monoculture

-Price fluctuation due to over production and competition from others

-Natural hazards like hailstorms which damage the tea leaves.

Use of pest sides

-Diversification of the economy i.e. by carrying out cattle keeping 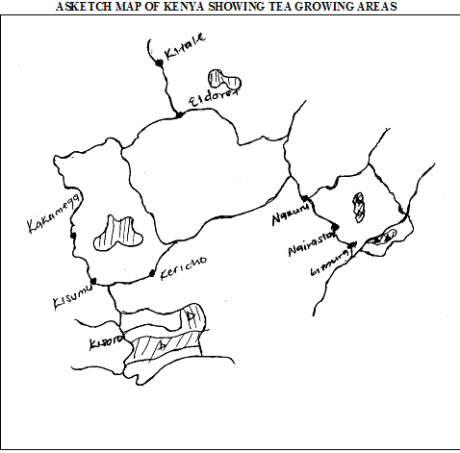 From plouching to harvesting the work is done by machines. The farmers invest heavily in labour saving devices.

-used for storing the grain.

Wheat is the principle crop but other crops like oats, maize, barley and rye are grown. New strains of wheat that can withstand droughts and cold are being introduced. Some farms also keep animals.

High output per month but low output per unit area. Because of extensive lands, a lot of wheat is produced resulting into surplus. As a result of this, these areas are called the granaries of the world.