Playing Scale on the Keyboard and Tonic Solfa

This unit talks about Playing a Scale on the Keyboard and the use of Tonic Solfa.it also show how fingers can be used in playing the keyboard.

Playing on the keyboard generally involves the use of both hands. In some cases, legs may be involved also, depending on the peculiar features of the keyboard instrument. We will, however, concentrate on the use of the hands, especially the right hand in playing the scale at this level.

Numbering of the Fingers

The fingers of both hands are numbered in relation to the preferred fingers desired to play individual notes/keys. Beginning from the thumb to the little finger, the fingers of each hand are numbered 1 to 5. Thus

We noted previously that on the keyboard, the left hand is used for playing notes in the bass staff, and the right hand for notes in the treble staff, unless otherwise indicated. References to the right hand and the left hand are often abbreviated R.H and L.H, respectively. Numbers of preferred fingers are sometimes written above the notes on the staff. To play the notes, the tips of the fingers are used, with the palms facing down, and the wrists are slightly raised. You are required to trim your nails to avoid injury and for proper playing. 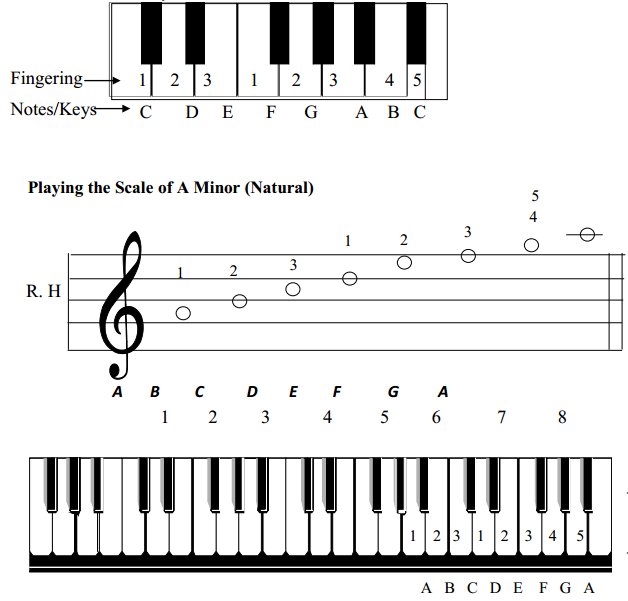 Playing the Scales of A Minor (Melodic and Harmonic)

Playing both scales utilises the same fingering as that of A natural minor. The difference lies in the notes or keys. For the melodic minor, when ascending the 3rd finger plays the black key above F (F sharp) instead of the white key F, and the 4th finger plays the black key above G (G sharp) instead of the white key G. When descending, the respective fingers play the white keys (natural) instead of their black key counterparts. In the harmonic minor scale of A, the 7th degree is the onlyblack key (G sharp), and this is played with the 4th finger in both ascending and descending. See illustrations of these scales below. (Refer to the respective scales in 3.3 above). 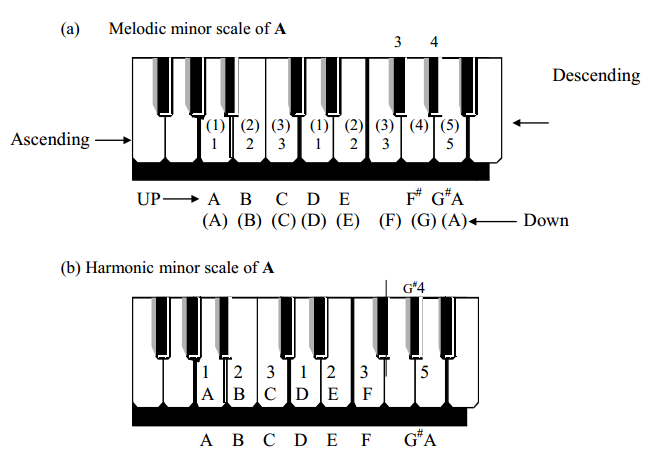 You are encouraged to begin playing these scales at a slow pace or tempo against a steady beat or pulse. You may use the second hand of the clock/watch as guide. When you have mastered each, play them at a slightly faster pace, and increase this as you gain proficiency. Note that to play each of the scales above with the left hand, the order of the fingers would be 5 4 3 2 1 3 2 1 when ascending, and the other way round when descending.

USE OF TONIC SOLFA

Tonic solfa, which in Latin is called solfeggio, and solfege in French, is a system of music notation. You learnt about another system or form of notation in Unit 1 of Module 2. Apart from these two, there are certain cultures such as those of Asia, which possess their own systems of notating music.

Tonic solfa originated about the 9th century A.D. It was developed by an Italian monk, Guido d’Arezzo, as a means of facilitating easy recall and effective singing by monks in the Roman Catholic Church. He evolved a mnemonic from a seven-line Latin hymn, Ut Queant Laxis, which was very popular among the Christians then. Each of the lines begins on a different scale degree, out of which grew the seven notes of our modern diatonic scale.

The mnemonic was formed from the first syllable of each line, except the seventh line, which combines the first letters of the two words to make a syllable. The hymn, which is a prayer to St. John the Baptist, runs thus:

Sancte Ioannes With reference to the seven-note major scale, the syllables of the hymn were represented as exemplified below:

From the above, therefore, the notes of the scale are read in succession from the tonic to its octave thus: do re mi fa sol la ti do. This is the Italian rendering. In the English language, these solfa names are spelt: doh ray me fah soh lah te doh (the last doh is the high octave/tonic, which completes the scale). However, the first letters of the solfa names are often used thus: d r m f s l t d. Tonic solfa functions as an aid to sight-reading and sight singing of music compositions, and exercises in ear training. It can promote easy writing of melodies. Further, it makes it possible to sing the scales of every key just by locating the position of the tonic. The system is adaptable in not only major and minor keys, but also where chromatic or altered notes are involved. For instance, it is possible to raise the pitches of d r f s l by a semitone each. The solfa would become de re fe se le (or di ri fi si li), respectively. On the other hand, r m s l and t can be lowered or flattened by a semitone each. These would result in the solfa names: raw maw saw law and taw, respectively. With this flexibility, it is possible to sing in solfa any pitch within a key. This also caters to the various forms of the minor scale (treated in the previous unit), whose natural form is: l t d r m f s l.