This unit is about Different Rocks and how they are formed. 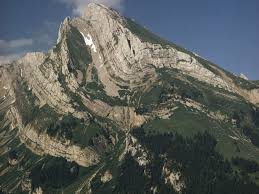 A rock is an aggregation of minerals, chemical elements and compounds in their natural state.

Some minerals are formed (occur) in their pure form such as gold diamond & silver.

While most minerals occur as compounds made up of more than one element.

Bauxite to get aluminum oxide

Hematite to get Iron Ore

Some rocks are hard such as granite while others are soft as day.

This comes from the Latin word ‘’Igis’’ and these rocks were believed originally to heave been ‘’fire formed’’, although it is now clear that they are not.

They are formed when molten rocks from the mantle are forced to rise along the lines of weakness in the crust & are ejected into the crustal rocks.

When magma solidifies within the crustal rocks, they form what is known as ‘’intrusive Igneous rock’’.

Sometimes magma is forced to reach the earth’s surface where it cools & solidifies to form Volcanic or extrusive Igneous rocks.

Molten rocks that have reached the earth’s surface looses most of its gasses and it’s known as Lava.

These are also known as plutonic igneous rocks, these formed when magma cools deep in the earth’s crust under great pressure.

The resulting rocks are compact course in texture & largely crystal led and they are also dark in color they include;-

These are formed as a result of magma being intruded into the upper layers of the crust and cooling at shallow depth below the surface. This occurs in Dykes and sills.

The resultant rocks are less coapct, fire grained and are light colored and include dolente.

THE VIDEO EXPLAINING THE FORMATION OF DIFFERENT ROCKS

When magma reaches the earth’s surface.

It loses most of its gasses becoming Lava later on it solidifies quickly to form very fine grained rocks with pornographic appearance e.g. Obsidian (Volcanic glass).

Volcanic rocks are also soft & some of them have pores indicating the escape of gasses from Lava e.g. pumice & basalt.

In E.A their evidences of igneous activities

Illustration of classification of various types of igneous rocks

These are divided from the remains of the pre-existing rocks or from chemical or biological activity on the earth’s surface.

They have been formed by deposition either on the earth’s surface or under water.

Most of them exits in layers or strata and are said to be stratified.

Classification by node of formation

They are classified in 3 classes;-

These are known as basic rocks.

These are made of fragments of rock wastes & carried by water, ice or winds & re-deposited elsewhere in areas of varying thickness.

These sediments have been compacted by pressure to form drift rocks, types eg,alluvial ,clay & sandstones.

Sediments that have been deposited on the earth’s crust include;-

These are derived from the remains of plants & animals deposits either in water or on land.

The good e.g. Coal from plants.

In Kenya diatomite formed from the remains of diatomic animals such as sponges, radiolarian whose bodies yield limestone.

These are formed either by perception of chemical reactions or by evaporation of salt solution.

Some rocks are rich in soluble salts e.g. limestone.

When it rains, the rain water which has dissolved Carbon dioxide becomes a weak carbonic acid which acid is capable of dissolving limestone.

This is common in underground caves where limestone is prescribed in stalagmites & stalacites of R.Nyina Mweru.

Also the leaching process in the soil results in the formation of the pan known as laterite  (marrum).

Evaporation may also give rise to the crystallization of dissolved salts which are known as Evaporates. 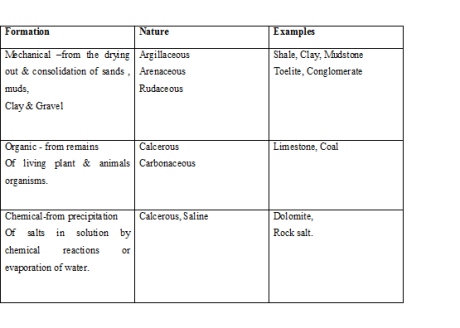 Metamorphic rocks in Greek means to ‘’change’’ from metamorphic to rocks are therefore rocks which were originally Igneous or sedimentary but have undergone mountainous either physical or chemical to produce new minerals or rock structures.

These mountains can be caused by earth movements subjecting the rocks to great pressure which can be on a very large scale affecting a very large area known as Regional metamorphism.

Metamorphic rocks are usually harder than those from which they are derived. This can be explained in respect to clay.

When clay is subjected to pressure the particles are squeezed and the rock becomes hard and brittle.

This is known as shale. When more intense pressure is applied to shale it becomes slate. The Particles are tightly packed together & the rock is extremely hard.

This can be diagrammatically illustrated below;- 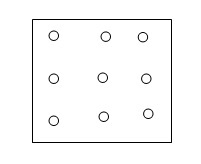 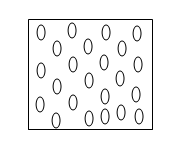 Metamorphism can also be due to heat (thermal metamorphism)

This usually occurs during igneous activity when hot magma is ejected into the earth’s crust.

Alternatively the sedimentary rocks in contact with the magma c with it to form new minerals e.g. when the country rocks combine with granite & acquire some properties of granite rocks, they are said to be granulized.

This kind of metamorphism is also known as Contact metamorphism. Such areas of contact are rich in minerals known as Aureoles. 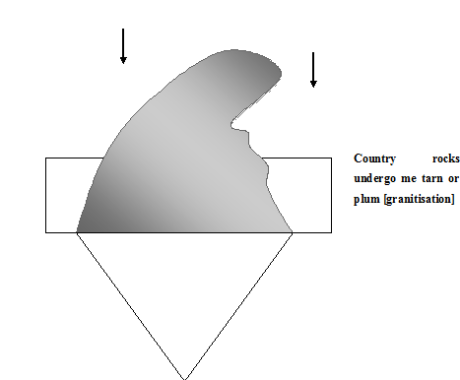 New minerals formed due to heat

In Uganda more importantly, there have been oil leaks observed at kibirocrin the rift valley around L.Albert.

Its quantities have not yet been established but could be very beneficial to the nation if economical quantities exist.

Depending on their nature, when parent rocks are weathered they generally give rise to soils.

Generally the old land rocks have thin and porous soils, while the newer and weather rocks such as sedimentary and volcanic rocks tend to develop deeper more workable soils.

the formation of springs of walls and boreholes to reach H2O water holding strata, the possibilities of natural or artificial reservoirs and the amt of surface run off in the form of rivers are all related to the nature of the ruches.

Bricks are also made from clays e.g. mort morillonite clay which formed the basis of clay industry e.g. the kajansi clay works.