This Unit is about Self and Mutual Inductance in Physics.

Demonstration  of self induction

L and R have the same resistance. L1 and L2 are identical lamps. When the current is switched on, lamp L2 lights up a second or two later after lamp L1 has lit. This is because the induced emf in  L opposes the current flowing through lamp L2. Therefore the growth of current in L2 to its steady value is delayed.

Variation of current with time through L1 and L2

If the  3V d.c is replaced by a 3V a.c, the lamp in series with L does not light because the induced emf, due to self induction in L, opposes the applied p.d continuously.

Question: Why L2 light when the iron core is removed in the coil?

Self inductance, L, of a coil is the ratio of the induced emf to the rate at which the current in

THIS VIDEO EXPLAINS MORE ABOUT SELF INDUCTANCE

When the switch is opened, the galvanometer deflects momentarily  in the opposite direction. This because the induced flux reduces to zero and hence an emf is induced in a direction according to Lenz’s law.

Mutual inductance, M between two coils is the ratio of the induced emf in the secondary coil to the rate of change of current in the primary coil. 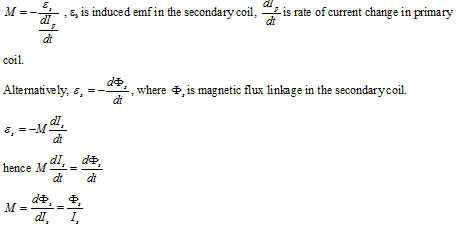 Hence mutual inductance is the magnetic flux linkage in the secondary coil when the primary current is 1A.

Unit of mutual inductance is the Henry(H).

Mutual inductance of a solenoid and a coil.

Consider a short secondary coil of Ns turns , area A wound round the middle of a long primary solenoid of n turns per metre.

Calibration of a Ballistic galvanometer using a standard mutual inductance

A known mutual inductance can be used to calibrate a ballistic galvanometer so that its sensitivity C can be known. 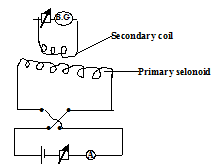 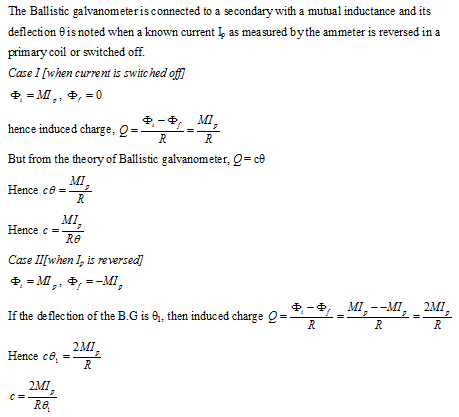 THIS VIDEO IS ABOUT MUTUAL INDUCTANCE