This Unit is about Soil Composition and how it works. 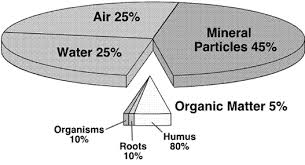 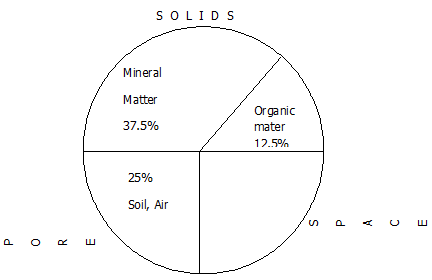 The figures represented in the pie chart are just averages.

The percentages will keep changing from time to time and form place to place depending on the following factors.

For example places that receive a lot of rainfall have a lot of soil water.

This influences the nature of drainage so that on steep slopes there is less soil water and most of the pore spaces are occupied by soil air. Mineral matter is easily leached from steep slopes.

In low lying areas, there is accumulation of organ ie matter and the soil tends to be high in water.

For example man adds organic matter or manure to field, he carries out irrigation and drainage and these two will both change soil air and soil water. By cultivation, man introduces more air in the soil.

Soil air occupies the pore spaces between solid particles if they are not already occupied by water. The larger the soil parties the greater the pore spaces and therefore aeration is free e.g. sand.

Soil Air differs from atmospheric air in several ways one way is that it is not every distributed. It varies from composition from place to place e.g. Air in a place where legumes are growing or have just been harvested will be richer in Nitrogen.

It has more carbon-dioxide and less oxygen than atmospheric air.

An experiment to find the amount of air in the soil sample.

Soil water is also found in pore spaces between the soil solid particles. It varies from place to place depending on the following;

Sandy soil with large pore spaces will allow most of the threw and very little will be held clay soil has small pore spaces so water cannot drain through first – it has a high water holding capacity.

iii) The amount of rain fall and frequency irrigation

Steep slopes are well drained and there is rapid surface rain fall so the soil retains water.

Flat areas are poorly drained so they tend to get water logged.

Bare soil loses a lot of water through evaporation and places that are well covered for example the forest the remains moist.

On the other hand there are some plants that draw a lot of water from the soil living it dry e.g. Eucalyptus tree.

Water in the soil is held by many forces for example

This is water that rises above the water table and is held in fine and medium pore spaces. It can easily move in soil and the finer the pore space the greater the capillary attraction.

It can easily be taken in by plant roots.

When there is excess water in the soil, it can easily move down wards being pulled by gravity this water is not available for plant use.

When there is very little in the soil, it is held strongly by the soil particles and can not easily be taken out by plant roots. If soil has high content of organic matter or clay it easily absorbs water form the atmosphere in time of drought. 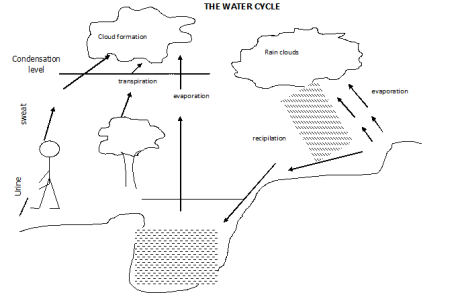 Water is continuously being gained and lost from the soil as shown on the diagram of the water cycle. Water is lost from soil surface and water body evaporation and also from plants through transpiration. Animals also lose water as they breathe and sweat all this contributes to water vapour in the atmosphere when water vapour reaches condensation level it forms clouds.

Clouds keep increasing in size until they lose water through precipitation (rain, nail, slit water will infiltrate into the  soil and move further down as gravitational water if there is a lot of rain. As it moves down it carries some mineral nutrients a process known as leaching. Man can also add water into the soil by irrigation.

Some water will be lost from the irrigation channels by evaporation.

In soil, when water comes across a resistant rock, it moves over it sideways into water bodies and this process is known as percolation surface runoff flows into large water.

Plants can take in soil water by capillary action and on hot days lose some of this water through transpiration then the cycle continues.

Experiment to determine the amount of water in soil sample

Calculate the percentage of substance lost.

Soil organic matter is a mixture of plant and animal residue, loving and dead micro organisms at various stages of decay.

It is well decomposed organic matte.

Factors affecting the rate of decomposition of organic matter.

Plant or animal material being decomposed;

Its age, its chemical composition etc e.g. cut young grass will decompose easily because a lot of water and has less fibre than a piece of timber.

E.g. if there is too much rainfall it will reduce soil aeration and therefore reduce on composition. Rice in temperature will increase there rate of decomposition up to a certain level.

Experiment to find the percentage of Humus content in the soil.

Put the soil in dish until it is half full and weigh.

The changes in soil.

Cool the soil in a descator and weigh again.

Repeat the heating until you get a constant mass.

This is the inorganic push of soil it is composed of small rock particles and minerals of various kinds. It varies in particles size and chemical composition.

An experiment to show that soil is made of different sized particles.