This unit is about static electricity and goes on to explain insulators and conductors of electricity.

Static electricity is the study of electric charges at rest.

Some effects of static electricity

There are two kinds of charges the Positive and negative charges;

To explain electrification by friction (rubbing)

An atom is made up of a small central nucleus which contains neutrons and protons. Neutrons are uncharged particles while protons are positively charged.

The nucleus is surrounded by electrons equal to protons in number, existing in orbits. In this state an atom is said to be electrically neutral.

NOTE: It is the electrons which move the protons remain in the nucleus.

THIS VIDEO IS ABOUT SOME OF THE EXPERIMENTS OF STATIC ELECTRICITY

An insulator is a substance that becomes electrified by rubbing e.g. glass, amber and sulphur.

In an insulator, all electrons are bound firmly to their atoms.

A conductor is a substance which cannot be electrified by rubbing e.g. metals

In a conductor, electrons are able to move freely from one atom to atom.

For successful results all apparatus used in electrical experiments must be thoroughly dry because water is a conductor.

METHODS OF CHARGING A BODY

A body can either be charged by contact or by induction.

When a body is charged by contact it acquires the same charge as the charging body.

When a body is charged by induction it acquires charge opposite to the one on the charging body.

The two bodies are placed near each other but not touching.

It is an instrument used for detecting and testing of small electric charges.

STRUCTURE OF A GOLD LEAF ELECTROSCOPE 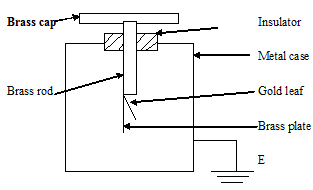 It consists of a brass cap supported by a brass rod at the foot of which is a brass plate having a leaf of gold foil attached. The rod is held by an insulating plastic plug in a case with glass sides.

USES OF A GOLD LEAF ELECTROSCOPE

If a rod e.g. glass rod is charged by friction and then brought near the cap of a gold leaf electroscope, the leaf is seen to diverge from the plate. A charge has been induced on the leaf and plate and hence repulsion occurs between them. When the charged rod is withdrawn the leaf falls indicating that the charge on the electroscope is only temporary.

We use a charged gold leaf electroscope (g.l.e) to test for the sign of charge on a body. Suppose the electroscope is negatively charged and an ebonite rod (previously rubbed with fur) is then brought near the cap of the g.l.e. an increase in the leaf divergence is noted.

A glass rod rubbed with silk is then brought down towards the cap. A decrease in divergence is noted.

An increase in divergence occurs when the charge on the electroscope and the test charge are of the same kind.

Hold a sample of the substance in the hand and then bring it into contact with the cap of a charged gold leaf electroscope.

If the substance is a good insulator there will be no leakage of charge through it and the leaf divergence does not change.

If the leaf falls instantly, it shows that the substance is a good conductor.

Between the two extremes there are certain substances that produce slow collapse of the leaf.

These are called poor insulators or poor conductor’s .e.g. Paper, wool, cotton, the human body and wood. However when these substances are very dry they become good insulators.

Two insulated brass spheres A and B are placed together so that they touch one another and thus form a single conductor.

The spheres are supported on insulating material to prevent conduction of charge away from them to the earth.

A positively charged rod is brought near to A.

As a result a negative charge is induced on A and a positive charge on B.

With the charged rod still in position sphere B is moved a short distance from A.

The charged rod is now removed and A and B are tasted for charge.

To charge a single body by induction 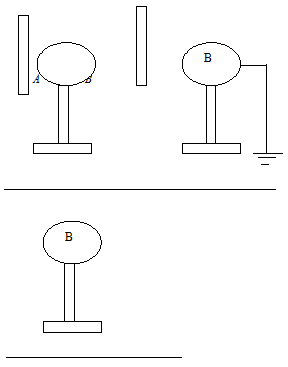 A negatively charged rod is brought near to the end A of a conductor AB.

Electrons in the conductor are repelled towards B by the electrons on the rod.

Positive charges are attracted to end A.

Earth the conductor by touching it with the finger.

Electrons are repelled to the earth. The finger is then removed from the conductor and the charged rod is withdrawn. It is found that the conductor is charged positively. 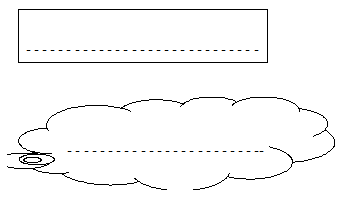 A small piece of aluminium foil is attracted to a negatively charged rod held just above it.

The charge on the rod pushes free electrons to the bottom of the foil, leaving the top of the foil with a net positive charge and the bottom negatively charged.

The foil is therefore pulled by the rod.

A slow stream of water can be bent by electrostatic attraction to a charged polythene rod.

THIS VIDEO IS ABOUT THE DIFFERENCE BETWEEN CONDUCTORS AND INSULATORS

A proof plane is a metal disc attached to an insulating handle. It is used to test for charge on a conductor by transferring charge onto a g.l.e.

Transferring electric charge If a positively charged rod is placed near a conductor AB standing on an insulator, negative charge will be induced at end A and positive charge at end B. 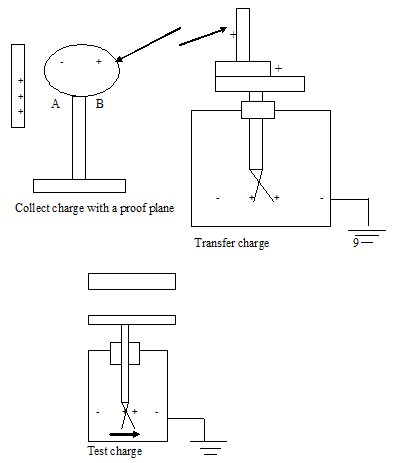 The electroscope and the proof plane are both discharged, and the experiment repeated using charge taken from end A of the conductor. This time an increase in divergence is obtained when a negatively charged ebonite rod is brought near the cap, showing that charge taken from A is negative.

A rod is used, charged with electricity opposite to that required on the electroscope. 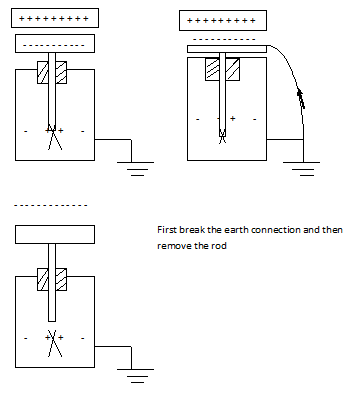 Distribution of charge over the surface of a conductor

A proof plane and gold leaf electroscope are used to investigate charge distribution on the surface of a conductor.

The proof plane is placed in contact with the surface at various places in turn and then transferred to the electroscope.

The divergence of the leaf gives a measure of the amount of charge transferred.

Surface density is defined as the quantity of charge per unit area of surface of a conductor.

A set of proof planes are used in these investigations having the same area but different shapes designed to fit the curvature if the surface at a specific place on the conductor.

Below are some of the shapes where surface density may be investigated.

It is noticed that charge is mostly concentrated at places where the surface is sharply curved. This is particularly noticeable at the pointed end of a pear shaped conductor.

In the neighborhood of a highly charged point conductor, ions of the same sign will be strongly repelled.

When these fast moving ions collide with air molecules they knock electrons off them thus creating more ions.

A tall building is protected from lightening by a lightening conductor consisting of a thick copper strip on the outside of the building connecting metal spikes at the top to a metal plate in the ground.

The negative charge on the plate is dissipated to the surrounding earth.

Point action occurs at the spikes. Negative ions are attracted to the spikes, become discharged by giving up their electrons.

These electrons pass down the conductor and escape to the earth. Positive ions are repelled upwards from the spikes and form a space charge.

This positive space charge however has negligible effect on neutralizing the negatively charged cloud. 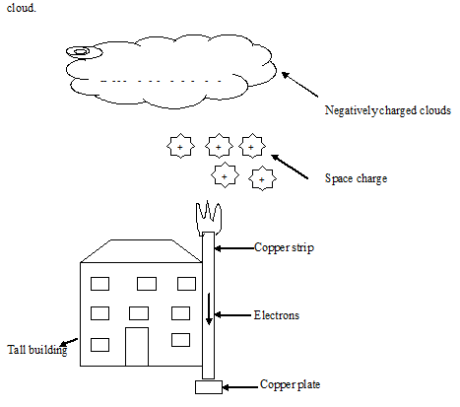 An electric charge sets up an electric field in the space surrounding it and an electric force is exerted on any charged body placed in the field.

A positively charged brass sphere supported by an insulating cotton thread is lowered inside a hollow can standing on the cap of a gold leaf electroscope.

Negative charges are included on the inside of the can and a positive charge is induced on the outside of it and also on the gold leaf. The leaf diverges.

No change in divergence of the leaf is noticed when the sphere is moved inside the can with out touching the sides of the can.

When the sphere is allowed to touch the bottom of the can still no change occurs in the leaf divergence.

On removing the sphere and testing it for charge, it is found to have been completely discharged, and there’s no longer any charge on the inside of the can.

It is therefore concluded that the inducing charge on the sphere has exactly neutralized the opposite negative charge on the inside of the can and hence the two are equal in magnitude. 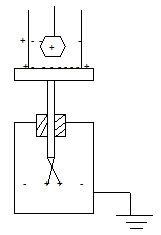