This unit shows how Statistics are integrated into geographical findings

It’s a representation of numerical information in form of graphs and diagrams and man maps.  This information can be represented using graphs, pie charts, maps.

When drawing a statistical diagram it must

-Have a scale if it is a graph

-Have an appropriate size i.e. not too big or too small

-Never use black for shading

Be representative of the in forgiven i.e. you must use the most

These are used mainly to represent a single value are a period of time. A bar graph will be used depending on the question.

-It’s easy to draw (not time-consuming)

-It’s easy to compare and contrast.

-It’s easy to interpret at a glance because one can easily see the periods of high or low production.

-It may be hard to obtain a scale of the figures vary a lot. 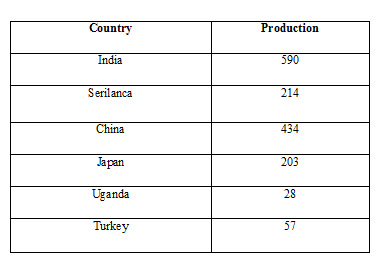 The data below shows the climate of Accra

These ones represent the number of bars showing various items in a defined period of time.

– It’s easy to interpret because it clearly shows the periods of high and low production.

-A lot of information can be plotted on one graph.

-It’s easy to compare and contrast the data there for it has a good impression.

-Its time consuming if there is many bars and a lot of shading/overcrossing makes interpretation hard.

-It may be difficult to find the scale if the figures vary a lot.

-It may become overcrowded if there are many valuables over a period of time.

-They can be used instead of bar

-They are similar to those of bar graph

One can use either bars/ line graphs.

It can create a lot of information on the same graph.

Since all the valuables do not begin at zero, it’s not easy to interpret at a glance.

The scale may be hard to find if the figures vary a lot.

It can either be a line or a graph.

It shows the divergences from the average

Find the average of the figures given.

Subtract the average from each figure in order to find out the divergence.

Using the average as a starting point (zero line) finds an appropriate scale.

The bar or line is easy to draw

It has a clear impression.

It has a lot of tedious calculations.

Since the presentation is not in raw data (divergence) it may be hard to interpret.

It can only be used to represent one valuable.

Production of robuster coffee in 1982 in the major African countries 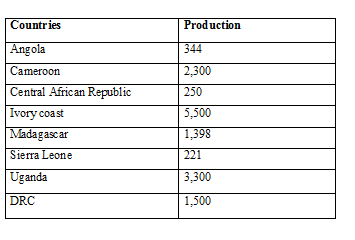 The bars are drawn horizontally and not vertically 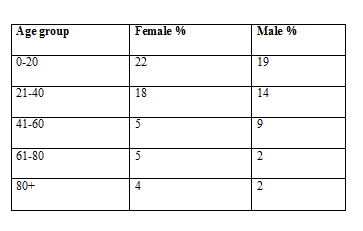 Always start from the north moving to clockwise.

For better presentation draw an outer circle in which to include the information required.

The circle should be of an appropriate size.

WORLD TEA PRODUCTION IN TONES IN 1981 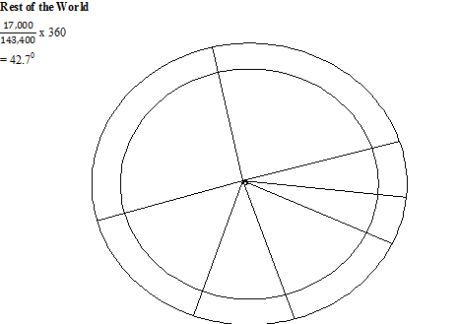