Systems thinking have its foundation in the field of system dynamics founded in 1956 by MIT professor Jay Forrester. Professor Forrester recognized the need for a better way of testing new ideas about social systems, in the same way we can test ideas in engineering. Systems thinking allows people to make their understanding of social systems explicit and improve them in the same way that people can use engineering principles to make explicit and improve their understanding of mechanical systems.

The approach of systems thinking is fundamentally different from that of traditional forms of analysis. Traditional analysis focuses on the separating the individual pieces of what is being studied; in fact, the word “analysis” actually comes from the root meaning “to break into constituent parts.” Systems thinking, in contrast, focuses on how the thing being studied interacts with the other constituents of the system—a set of elements that interact to produce behavior—of which it is a part. This means that instead of isolating smaller and smaller parts of the system being studied, systems thinking works by expanding its view to take into account larger and larger numbers of interactions as an issue is being studied. This results in sometimes strikingly different conclusion than those generated by traditional forms of analysis, especially when what is being studied is dynamically complex or has a great deal of feedback from other sources, internal or external.

The character of systems thinking makes it extremely effective on the most difficult types of problems to solve: those involving complex issues, those that depend a great deal dependence on the past or on the actions of others, and those stemming from ineffective coordination among those involved.

Examples of areas in which systems thinking has proven its value include:

An example that illustrates the difference between the systems thinking perspective and the perspective taken by traditional forms of analysis is the action taken to reduce crop damage by insects. When an insect is eating a crop, the conventional response is to spray the crop with a pesticide designed to kill that insect. Putting aside the limited effectiveness of some   INFORMATION SYSTEMS DESIGN AND PROGRAMMING

pesticides and the water and soil pollution they can cause, imagine a perfect pesticide that kills all of the insects against which it is used and which has no side effects on air, water, or soil. Is using this pesticide likely to make the fanner or company whose crops are being eaten better off?

If we represent the thinking used by those applying the pesticides, it would look like this:

According to this way of thinking, the more pesticide is applied, the fewer insects there will be damaging crops, and the less total crop damage.

The temptation is to say that eliminating the insects eating the crops will solve the problem; however, that often turns out to not be the case. The problem of crop damage due to insects often does get better – in the short term. Unfortunately, the view diagrammed above represents only part of the picture. What frequently happens is that in following years the problem of crop damage gets worse and worse and the pesticide that formerly seemed so effective does not seem to help anymore.

In other words, the action intended to solve the problem actually makes it worse because the way its unintended side effects change the system ends up exacerbating the problem.

In fact, some studies suggest that a majority of the 25 insects that cause the most crop damage each year became problems to begin with because of exactly this cycle. Graphically, the way this happens can be represented as: 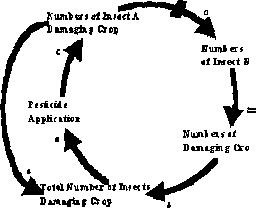 With this picture of the system in mind, other actions with better long-term results have been developed, such as Integrated Pest Management, which includes controlling the insect eating the crops by introducing more of its

predators into the area. These methods have been proven effective in studies conducted by MIT, the National Academy of Sciences, and others, and they also avoid running the risk of soil and water pollution.

The way that the broader perspective of systems thinking creates the understanding necessary for better long-term solutions was also evident in the work I did with a company whose industry was being deregulated. They seemed to be doing everything right in working on a customer-relations problem they were experiencing: they had a team of capable people working on it, they were using a process that had been successful many times in the past, and they even had affected customers giving them feedback on proposals to rectify the situation.

However, they were having difficulty seeing the big picture of how the way they historically did things was contributing to the problem. Working together over two days, I was able to help them see how the problem was being exacerbated and the most powerful actions they could take to solve it. The session ended with the creation of a strategy for addressing the problem that was unanimously supported by the team and the customers.

By seeing the whole picture, the team was able to think of new possibilities that they had not come up with previously, in spite of their best efforts. Systems thinking have the power to help teams create insights like these, when applied well to a suitable problem.

So many important problems that plague us today are complex, involve multiple actors, and are at least partly the result of past actions that were taken to alleviate them. Dealing with such problems is notoriously difficult and the results of conventional solutions are often poor enough to create discouragement about the prospects of ever effectively addressing them.

One of the key benefits of systems thinking is its ability to deal effectively with just these types of problems and to raise our thinking to the level at which we create the results we want as individuals and organizations even in those difficult situations marked by complexity, great numbers of interactions, and the absence or ineffectiveness of immediately apparent solutions.

Systems thinking introduces to the idea of a complex and interconnected organizational structures, and the need to focus attention on the components of the system, so that the problems of the system as a whole are better diagnosed.