Two neuro transmitters; acetylcholine and nor epinephrine are released at the neuronal terminals and are responsible for bringing about all the changes effected by the autonomic nervous system for example bladder contraction and salivary secretion. The involuntary effects of autonomic innervations contrast with the voluntary control of skeletal muscles through the somatic neurons.

Structures and Pathways of the Autonomic System Compared to Somatic System

The cell body of the first neuron in the series is located in the CNS. Its axon, the pre-ganglionic fibre synapses with the cell body of the second neuron, which the lies within a ganglion outside the CNS. The axon of the second neuron, the post-ganglionic fibre, innervates the effector organ. The involuntary effects of autonomic innervation contrast with the voluntary control of skeletal muscles by way of somatic motor neurons.

Neurons of the peripheral nervous system conduct impulses away from the central nervous. There are two major categories of motor neurons. Somatic motor neurons have their cell bodies within the CNS and send axons to skeletal muscles which are usually under voluntary control.

Unlike somatic motor neurons, which conduct impulses along a single axon from the spinal cord to the neuromuscular junction, autonomic motor control involves two neurons in the grey matter of the brain or spinal cord. The axon of this neuron does not directly reach the effector organ but synapses with a second neuron within an autonomic ganglion. The first neuron is called the preganglionic neuron while the second in this pathway is called the post-ganglionic neuron and has an axon that extends from the autonomic ganglion and synapses with the cells of an effector organ.

Since autonomic nervous system helps to regulate the activities of glands, smooth muscle and cardiac muscle, autonomic control is an integral aspect of the functioning of most body systems. Autonomic regulation therefore partly explains the functioning of the systems/organs of the body like endocrine regulation, functions of the heart and circulation etc.

Unlike skeletal muscles which enter a state of flaccid paralysis and atrophy when their motor nerves are cut, the involuntary effectors are independent of their innervation. Infact damage to an autonomic nerve makes its target organs more sensitive than normal to stimulating agents. Such compensatory mechanism may explain why the ability of stomach mucosa to secrete acid may be restored after vagotomy.

Smooth muscle and cardiac muscle have intrinsic muscle tone. In addition they can contract rhythmically even in the absence of nerve stimulation. This is in response to electrical waves of depolarization initiated by the muscles themselves. Autonomic innervation simply increases or decreases this intrinsic activity. Autonomic nerves also maintain a resting tone in the sense that they maintain a baseline firing rate that can either increase or decrease.

The release of the neurotransmitter, acetylcholine from somatic motor neuron always stimulates the effector organ (skeletal muscle). In contrast some autonomic nerves release transmitters that inhibit the activity of their effectors.

Divisions of the Autonomic Nervous System

The sympathetic and parasympathetic divisions of the autonomic system have some structural features in common. Both consist of pre-ganglionic neurons, which originate in the CNS, and post ganglionic fibres that originate outside the CNS in ganglia. The specific origin of the prreganglionic fibres and their location are however different in the two divisions.

It is also called the thoracolumbar division because its preganglionic fibres leave the spinal cord from the first thoracic (TI) to the second lumber (L2) levels. Most sympathetic nerve fibres however separate from the somatic motor fibres and synapse with postganglionic neurons within a double row of sympathetic ganglia or para vertical ganglia located on either side of the spinal cord.

The axons of the post-ganglionic sympathetic neurons are unmyelinated and form the grey rami communicates as they return spinal nerves to their effector organ. Since sympathetic axons form a component of spinal nerves, they are widely distributed to the skeletal muscles and skin of the body where they innervate blood vessels and other involuntary effectors.

Many preganglionic fibres that exit the spinal cord in the upper thoracic level travel into the neck, where they synapse in cervical sympathetic ganglia. From here post ganglionic fibres innervate the smooth muscles and glands of the head and neck.

Many preganglionic fibres that exit the spinal cord below the diaphragm pass through the sympathetic chain of ganglia without synapsing. Beyond the sympathetic chain of ganglia they form the splanchnic nerves. These preganglionic fibres in the splanchnic nerves synapse in collateral ganglia. These include the coeliac, superior mesenteric and inferior mesenteric ganglia. Post ganglionic fibres that arise from the collateral ganglia innervate organs of the digestive, urinary and reproductive systems.

The adrenal medulla, the inner portion of the adrenal glands is considered a modified sympathetic ganglion, its cells having been derived from the same embryonic tissue as ganglionic sympathetic neurons. It secretes the hormones epinephrine (80%) and norepinephrine when stimulated by the sympathetic system. 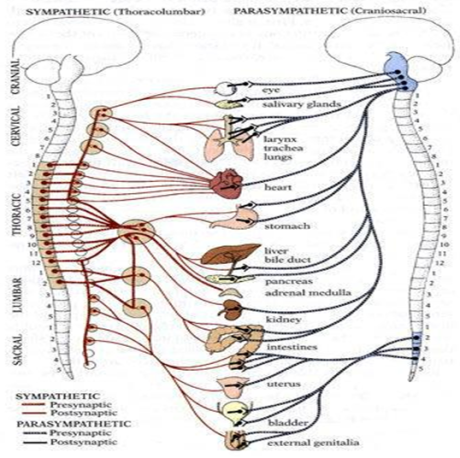 The preganglionic fibres of this division originate in the brain (specifically midbrain, medulla, oblongata and pons) and in the second through 4th sacral levels of the spinal column. It is therefore also called craniosacral division. These fibres are long in comparison to sympathetic preganglionic fibres because they do not end until they reach the terminal ganglia that lie next to or within the effector organs.

The post ganglionic axon terminals from there innervate the constrctor muscles in the iris, as well as the ciliary muscles that change the shape of the lens to focus the eyes. Preganglionic fibres originating in the lower pons leave by way of the facial cranial (vii) nerve to either the pterygopalatine or submandibular ganglia where they synapse.

Preganglionic fibres that emerge from cell bodies located in the dorsal vagal nucleus of the medulla are conveyed by the very long vagus (x) nerve. They synapse in terminal ganglia located in many regions of the body. The preganglionic fibres travel through the oesophageal opening in the diaphragm into the abdominal cavity.

In each region some of these pre-ganglionic fibres branch from the main trunks of the vagus nerves and synapse with postganglionic neurons located within the effector organs. These very long preganglionic vagus fibres provide parasympathetic innervation to the heart, lungs, oesophagus, stomach pancreas, liver, small intestine and the upper half of the large intestine. Post ganglionic parasympathetic fibres arise from terminal ganglia within these organs and synapse with effector cells (smooth muscles and glands).

From the sacral levels of the spinal cord arise preganglionic parasympathetic innervation to the lower half of the large intestine, rectum and to the urinary and reproductive systems. These fibres like those of the vagus synapse with terminal ganglia located within the effector organs.

Functions of the Autonomic Nervous System

Think about the body resources needed in such circumstances. The heart beats more rapidly and more forcefully, blood pressure, is elevated because of generalized constriction of the blood vessels; the respiratory airways open wide to permit maximal airflow, glycogen (stored sugar) and fat stores are broken down to release extra fuel in the blood; and blood vessels supplying skeletal muscles dilate.

The parasympathetic system however is not normally activated as a whole. Visceral organs respond differently to sympathetic and parasympathetic nerve activity because the postganglionic fibres of these two divisions release different neurotransmitters.

Neurotransmitters of the Autonomic Nervous System

The possible explanation lies in the biochemistry of the tissue cells, especially differences in the membrane receptor proteins. For example two major classes of these receptor proteins have been designated alpha and beta adrenergic receptors. There are also two subtypes of each class for example alpha 1 and alpha – 2 and beta 1 and beta 2.

Somatic motor neurons, all preganglionic autonomic neurons and most postganglionic parasympathetic neurons are cholinergic releasing ACH as a neurotransmitter.

Most visceral organs are innervated by both sympathetic and parasympathetic nerve fibres. On a general note the two systems exert opposite effects in a particular organ. One system dominates at one time while the other dominates other times depending on circumstances. Usually both systems are partially active at each point in time until the particular circumstances that will cause the activity of one to dominate the other ensue.

A few organs in the body however do not have dual innervation. These include the adrenal medulla, erector pili muscles, sweat glands and most blood vessels which receive only sympathetic innervation.

The medulla oblongata in the brain stem is the area that most directly controls the activity of the autonomic system. Almost all autonomic responses can be elicited by experimental stimulation of the medulla. The organ contains centres for the control of cardiovascular, pulmonary, urinary, reproductive and digestive systems.

The medulla oblongata itself is responsive to regulation by higher brain areas. One of these is the hypothalamus which is the brain region that contains centres for the control of body temperature, hunger, thirst, regulation of the pituitary gland and together with the limbic system and cerebral cortex also controls various emotional states.

The limbic system which includes the cingulate gyrus of the cerebral cortex, the hypothalamus, hippocampus and amygdaloidal nucleus is involved in basic emotions like anger, fear, sex and hunger. The involvement of the limbic system with the control of autonomic function is responsible for the visceral responses characteristic of these emotional states. Blushing, fainting, racing heart, cold sweats are examples of the many visceral reactions that accompany emotions as a result of autonomic activation.

Somatic motor neurons are influenced by many converging presynaptic inputs both excitatory and inhibitory but the level of activity in a motor neuron and its subsequent output to the skeletal muscle fibres depend on the balance of EPSPs and IPSPs. The motor neuron is considered to be the final common pathway by which any other parts of the nervous system can influence skeletal muscle activity. The somatic nervous system is considered to be under voluntary control but much of skeletal muscle activity involving posture, balance and stereotypical movements are subconsciously controlled.