This unit covers part of Primary Six Science, Term One 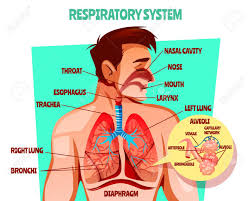 ORGANS OF THE RESPIRATORY SYSTEM

Respiration is the process by which the body uses food and oxygen to release energy, heat, carbon dioxide and water vapor. Functions of the parts

Breathing is the act of taking in of oxygen and sending out of carbon dioxide from the body.

Breathing involves exchange of gases in an organism

Breathing starts from taking in air through the nose to the lungs.

There are two types namely;

Inspiration is the act of drawing in air into the lungs through the nose.

The air we breathe in contains more oxygen than carbon dioxide.

We breathe in to increase oxygen supply in the body

Events during inhalation / breathing in.

This is the act of taking out of air from the Lungs through the nose.

Events during expiration / breathing out / exhalation

ADAPTATION OF THE AIR SACS TO THEIR WORK

Gaseous exchange in the alveolus

Gaseous exchange takes place in the alveoli and in the air sacs of lungs.

When blood reaches the alveoli, carbon dioxide is lost and oxygen is added to blood.

Oxygen is able to be added to blood and carbon dioxide is lost by a process called diffusion.

An illustration showing gaseous exchange at the alveoli. How are air sacs suitable for gaseous exchange

Summary of the composition of inhaled and exhaled air

DISEASES OF THE RESPIRATORY SYSTEM.

Diseases of the respiratory system.