GEO2/5: THE MAJOR ENVIRONMENT ZONES OF THE WORLD 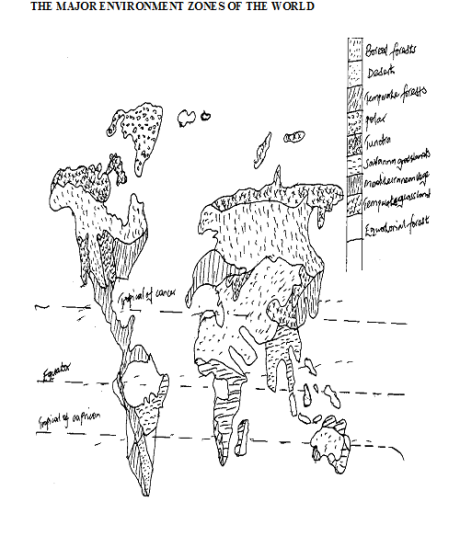 Forestry is the preservation and conservation of trees, lumbering is the exploitation of the forests and man’s utility.

There are two major types of forests that is to say; equatorial and temperate forest.

In the temperate forests there are two major types that are to say; coniferous and Broadleaved forests.

They are especially developed between 0.60 North and South of the equator. They are extensively found in three main regions

These forests were intensively developed but have been drastically reduced by human encroachment. That is to say; Msizi, Muvule, Ebony, Mahogany and Rose wood.

-Source of fuel that is to say; charcoal, fire wood

-Source of foods and fruits

-They are used in construction and building and furniture making

-They modify climate by increasing rainfall through evapo-transpiration

-They are habitats for wild animals

-The forests help conserve the soil by preventing erosion and the leaves that drop keep the soils fertile.

-They offer employment and therefore a steady income to lumberers, wood cutters, wood craft specialists, furniture makers and others.

-They act as water catchment areas

-The cellulose extracted from the woods is used in making leather tan.

-The nuts from the trees are used in making buttons

They are a source of bark cloth

-From the saps of some trees products like gum, rubber, glue, erasers are got.

-Forests are ever green due to high rainfall between 1500-2000mm annually and the high temperatures above 280c.

They are made of hard wood like Mahogany and Ebony

They are generally tall trees with wide spreading intertwining branches

They grow in 3 different strata of trees above 30 meters, moderately fall strata of trees between 15 and 30 meters. In these strata, the trees are dome together and from a dense canopy, the third strata is of short trees below 15 meters.

The forests are composed of creepers, climbers and parasites which intertwine together making penetration difficult

At the boarders of the forests where sun light penetrates there is thick under growth.

The leaves are also constantly dropping with water

The trees have large trunks

Due to large trunks, the trees develop high buttress roots at the base in order to support the trees

They have aerial roots that develop from tops

They have wide spreading branches which lead to the formation of the Canopy.

They have broad leaves

PROBLEMS FACED IN THE EXPLOITATION OF THESE FORESTS

i.e. location and extraction of more valuable trees is difficult and expensive.

-Due to their different stratus when the tall trees are cut down they destroy the smaller trees.

-It is hard to penetrate the forests because of thick under growth at the boarders under story vegetables, tangled creepers and under growth makes access to desired species difficult.

-The dump environment makes the soil muddy and creates a way in transporting the wood.

The dripping leaves make the work irritating to be lumberers as water falls on them every time.

-The large trunks slow down the working speed. The great weight and size of hardwood trees makes felling hard even with modern machines.

-Due to long maturity when trees are cut down, it takes to get another forest.

The high buttress roots which grow up to 5 meters make it impossible to cut the tree from its base therefore lumberers have to climb ladders to cut the straight trunk.

-The climbing of ladders is dangerous. The trunk can be too wide to cut through.

-Since forests harbor wild animals, they are a threat to be lumberers and snakes are also threats and jungle environments encourage the breeding of mosquitoes which cause diseases.

-There is limited capital there for the forest resources cannot be fully exploited. Due to this it’s difficult to purchase more advanced equipment

i.e. electric saws there for most lumberers use hand sows or axes which are slow and inefficient.

-Limited market because the population in these areas is poor and hard wood has few uses and so it’s not highly demanded.

-There has been extensive deforestation and now forest resources are few.

-Poor transport and network and few vehicles to transport the fallen wood.

-There are limited processing industries there for the wood has to be transported over long distances. 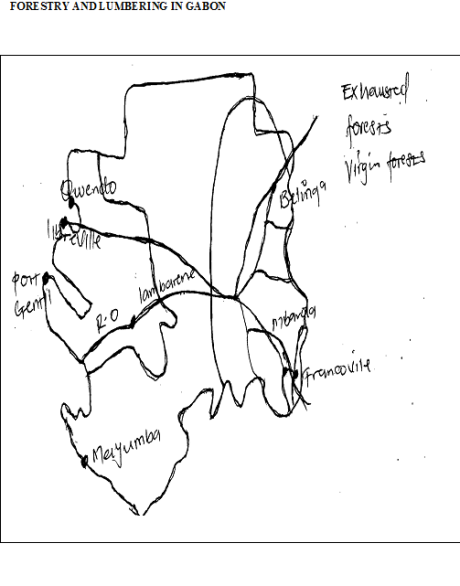 The great forest land lie in the Basin of Roguwe humbering is one of the important activities in Gabon an the country depends a lot on its exports.

The activity is carried out by both European farms using mechanized methods and Gabon enterprises.

Originally lumbering was concentrated at the ports and along the river, but this zone has been exhausted and the lumbers are moving further in land.

A new port called Owendo has been constructed as well as railway line which helps in transporting forest products.

Gabon has a good species of tree called Okoume which yields a rosy-scented soft wood that is highly demanded and is used in the manufacture of polwood.

Other tree species include Ozigo, mahogany and ebony. Most of its forests have been exhausted due to mismanagement but measures are being taken to conserve the forests

Timber is a leading export accounting for about 40% of the export earnings. Besides Okuome they also export Lumba tree.

Most of its forests near the coast have been exhausted and the lumberers are moving in land.

Logs comprise the third position in the export earnings. A third of the country is covered by forests.

The government encourages the export of sawn timber richer than logs because they are of a more commercial value.

This has encouraged growth of secondary processing industries.

Other countries where lumbering is important include Cameroon, Ghana, Ivory Coast and Central African Republic.

The forests occupy areas; the export of timber from these countries is small. The larger producer and exporter of timber is Brazil. The amazon contains vast varieties of hard wood but little of it has been exploited e.g. Mahogany and Rosy wood.

Timber is an important export item in countries like Philippines, Indonesia, Malaysia and Burma. In Philippines about 2/5 of the total area is covered with commercially exploitable forests.

They are of two types: Broad leafed and coniferous forests where the two are combined it’s called a mixed forest.

Importance of these forests

-Used in making of paper and pulp products.

-Used in building and construction.

-Used in the manufacture of rayon.

-Its cellose is used in the manufacture of elastics and fuel.

-Used in the manufacture of match sticks.

-The fibers are used in the production of taropentine, paints and polish.

-Used in manufacture of crates and boxes for the transportation of goods.

-Forests are a tourist attraction.

-The forests modify the climates.

-They act as wind breakers and soil conservers.

-The broad leafed forests shed their leaves while of coniferous are ever green.

-The coniferous trees are corn shaped, so the snow slides off them easily.

-The trees grow in pure stands.

-The forests have to go undergrowth or greepers.

-The trees have straight narrow trunks.

-The coniferous have soft wood while the deciduous are mixed.

-The trees are almost of the same height.

-The trees take a short time to mature i.e about 15 years.

-The coniferous have wide spreading shallow roots and thick barks. The trees roots help in absorption of water while the barks retain it.

PROBLEMS FACED IN THESE AREAS