This Unit is about World war 2 and Nationalism in Uganda. 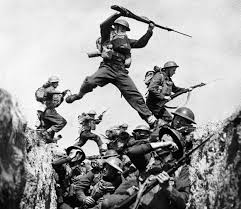 Germany an Italy started the second world war in 1931.

The war was between Germany and Italy and Britain, France and their allies.

Many Ugandans were taken to go and fight n the side of Britain.

How did the Ugandan soldiers benefit from the Second World War?

i) They gained military skills, experience and knowledge of fighting.

ii) They learnt that Whites could be fought and defeated.

iii) They knew the importance for fighting for freedom.

iv) They wanted fellow Africans to be given equal opportunity in business.

At the end of the war in 1945, the soldiers returned as Veterans.

Effects/Results of the Second World Wars.

Is one’s love for his or her country.

The demand for Independence

Reasons why Ugandans fought for independence