THE STORY OF DANIEL

This Unit is about Daniel and how he did it. 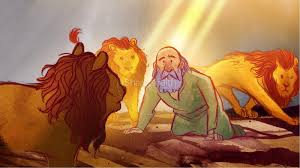 THE STORY OF DANIEL

Read the story of Daniel in the pit of lions in the book of Daniel 6:1 – 24 and answer the following questions.

In the above story, we learn that Daniel had strong faith and trust in God at all times. Therefore, Daniel was blessed by God and he was made a leader  governor in Babylon.

SOME FAMOUS CHRISTIANS OF GREAT FAITH IN GOD

(i)      The story of Perpetua comes from North Africa in a place called Carthage in present day Tunisia,

(ii)     Carthage was under the Roman empire who wanted all their subjects to worship their gods,

(iii)    All Christians who did not obey were being imprisoned or killed,

(iv)    Lady Perpetua continued being committed to God and she was imprisoned and later thrown into a den of lions that ate her.

(i)      Mother Theresa founded an organization called Sisters of Charity in order to provide love of Christ by caring for the needy such as the homeless, hungry and the sick.

(ii)     This organization is serving the needy all over the world including Uganda.

The Uganda martyrs are also  a very good example of people of great faith in God not found in the Bible.

Who is a martyr?

A martyr is a person who is killed for believing in his /her religion.

Who was the first martyr in the Bible?

Who was the first Christian martyr in the Bible?

Name the first three Ugandan martyrs who were killed in 1885.

Where were the first Ugandan martyrs killed from?

Apart from Natete, name other places where the Uganda martyrs were killed from.

Name the place where most Uganda martyrs were killed from.

Apart from the earliest three martyrs, name other four martyrs in Uganda.

Who ordered for the killing of the Uganda martyrs?

Who was Kabaka Mwanga’s chief executioner /killer of the Uganda martyrs?

When do we celebrate Uganda martyrs day?

On 3rd June every year.

What lessons do we learn from the story of the Uganda martyrs?