This unit is based on the aspect of Tremadotes 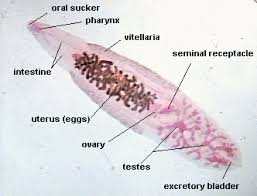 Flatworms is broadly divided into two classes; Monogeneans and digeneans. The monogenetic trematodes are so called due to the completion and dependence on a single host, and are common with aquatic vertebrates (fishes). Examples are Dactylogyrus and Gyrodactylus. Digenetic trematodes compulsorily complete their life cycle between two different host species. The most common ones include Fasciola (F. hepatica and F. gigantica), Schistosoma (S. haematobium, S. mansoni, S. japonicum, S. intercalatum, S. mekongi), Paragonimus westermani, and Clonorchis sinensis

These are bilaterally symmetrical triploblastic organisms, pronounced cephalization, and the onset of specific physiologic organs. However, parasitic flatworms are devoid of respiratory, circulatory, and digestive systems absent. Trematodes are generally flat, elongate and non-segmented worms. 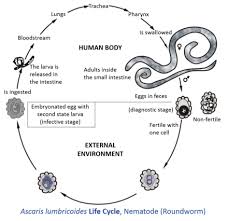 These parasites invade organs such as musculature, lungs, renal and intestinal blood vessels, as well as liver of mammals.

Trematode infection is common in the tropic particularly in places whre there is a preponderance of their snail intermediate host.