This deals with relationships between organisms/members of the same species. E.g associations such as a flock of sheep, a school of fish, herds of cattle, colonies of coelenterates, filaments of algae, colonies of social insects (such as bees, termites and ants) etc. Thses associations are based on cooperative behavious within the groups. However this association falls outside the scope of parasitism.

This occurs between organism of different species, resulting from diverse biological links in morphology, ecology, physiology and biochemistry.

A spectrum of heterospecific associations may overlap, consisting of predation, phoresis, commensalism and parasitism.

This form of association is casual because they retain their physiological independence and are just ecologically linked. Loose associations provide biological advantages to those organisms in the association over those that are not in association. Significantly, it is usually one sided benefit. They include:

Phoresis (trnansport commencerlism) is a form of loose association in which an organism provides shelter, support or transport for the other organism,usually a sedentary animal of a different species. The passenger can survive without its usually motile substractum or attachment surface. There is no conflict of interest in this association. Examples are barnacles on limpet mollusks, dung beetle, Aphodius fimentarius carying dauver-lavae of Pledora coactatata ( a free-living nematode which feeds on bacteria) etc.

Commensalism (Co= together, Mensa= table) is an association between two organisms in which one benefits, but the host is not hurt nor injured. It usually occurs between species that are either vulnerable to predation, danger or with an inefficient means of locomotion, feeding or edfence. It is the most indefinite and least obligatory inter-specific relatuionship. The host neither benefits nor looses in the relationship. 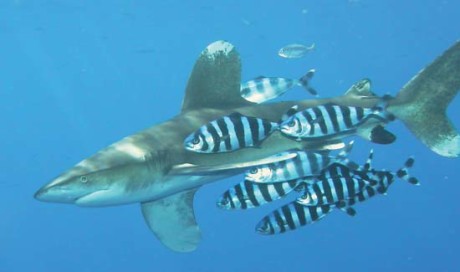 There are three types of commensalism

Cleaning: in which one organism cleans the other by feeding on the parasite of the host organism. E.g Bulbus ibis (cattle egret) feeds on ectoparasites on the skin of cattle, Naucrates doctor (pilot fish) feeds on the ectoparsites of shark.

Protection/camouflage.E.g the anemone hermit crab, Dardanus pedunculatus attaches several anemones to its shell, for camouflage and as a deterrent to possible predators.

Synoecious (syn= together, oikos= house): which involves animal living together in the shell/burrow of another animal. E.g Mytilus edulis (mussel0 harbours the pea crab (Pinnotheras pisum) within its mantle cavity.

This form of association is typified by the predator- prey relationships in which one organism uses the other as a source of food. The predator usually kills the prey or eats part of it (as in plants). E.g leeches feeding on blood of aquatic animals and some blood sucking insects such as lice and ticks.

There are two basic forms of intimate associations. They are:

This is a non-competitive, physiologically interdependent association between organisms of two different species. It is considered as the most advanced form of symbiosis because it involves reciprocal benefits. They always live together and mutualism is recognized as a special case of parasitism, in which metabolic by-products of the associates are of valuae to the partners. E.g Trichonympha campanula (intestinal flagellates) feeds on the wood chips in the gut of termites and wood roaches. They by-products of cellulose digestion and cellulose of the flagellated protozoan are useful to the inscet. The sexual reproduction of the protozoa is stimulated and regulated by the insect moulting hormone, ecdysome. The anaerobic environment of the inscet’s gut is integral to the survival of the flagellate. The two organisms depend on each other for survival. Physiological dependence is an essential component of mutualistic relationships.