This unit is about Volley ball and Badminton as studied in Physical Education.

Illustration of a valley ball pitch. 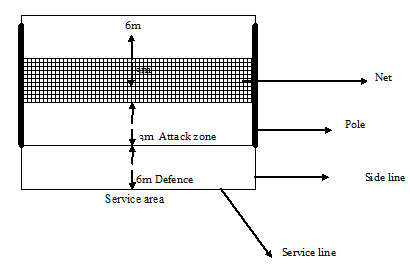 Service and returns in volley ball include;

THIS VIDEO GIVES THE BASICS OF A VOLLEYBALL GAME

This is a racket game which can be played by either singles or doubles.

Since the game involves stretching, taming, and reacting quickly, clothing must be strictly allowing easy movement.

Shoes should be light and designed for flexibility and grip on the court.

The winner of the loss has the following choices

– Choose to serve or receive.

It is the act of putting the shuttle cork to play.

The first player in males singles, female singles, Double for both male and female winning 7 points wins the game.

A match is based on 3 games i.e a player or a pair of players (In case of doubles) who wins to of the 3 games wins the match.

The main aims are;

VIDEO BELOW GIVES BASICS ABOUT THE GAME