This unit bases on how its vital to conserve wildlife

Goals or Benefits of Wildlife Conservation

Some of these goals overlap but the creation of the above system and how to resolve conflicts among objectives or between groups of people is the essence of management.

Some people hold private objectives for the wildlife resources. Hence, wildlife managers must manage wildlife to satisfy these categories of people apart from other desired objectives.

Wildlife manager and the public are interested in animal preservation. There may be other reasons for preserving a species, but discriminating this objective helps direct managerial action. Animals are seen as essential part of the land character and vitality.

Perhaps the oldest reasons for managing wildlife is that it provides meat, fur, hides, horns, bones, hairs and other products to meet mans needs either directly or through sale or barter.

The vast interactions of animals with their environment are poorly understood, despite years of investment in research. Nevertheless enough is known to community about wildlife losses or extreme abundance. Major changes in wildlife can lead to dangerous less or more harm to the ecosystem.

By observing wildlife, the status of the ecosystem within which humans live may be appraised. Wildlife becomes the index to environmental quality, and early warning system that may suggest when action is needed to check deterioration of the human life style or decline in longevity. Recons Procyon lotor are studied to asses heavy metal build ups – along streams, starling Strurnnus vulgaris are collected to access pesticide buildup. Wildlife may also provide a human health analog. Experimental populations of animals show the effect of crowding and other phenomena to be potentially analogous to their effect on humans. With increased crowding of vertebrates there is a corresponding increased disease susceptibility, homosexuality and rescripts of embryos as well as reduced care of young’s and reduced infant survival.

It has been said, erroneously in many wildlife conferences and gathering that a monetary value cannot be placed on wildlife. It can, and many wildlife populations are managed to increase monetary returns, or reduced losses from wildlife. These include hunting activities and equipment fees, fur sales, crop and livestock damage and differences in land values due to the presence of wildlife. 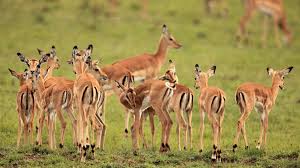 Attitudes towards wildlife and wildlife values continue to change. New methods for pest control evolved. Intensification of land uses creates wildlife problems where none previously existed. The problem of wildlife damage and control from a historical view point is referred to as dynamics of wildlife conservation.

Predation upon life stock by large carnivores is one of the earliest most sustained and most widely recognized types of wildlife damage.

Wildlife conflicts with crops where birds may cause severe damage to fruits or agricultural crops, and for several reasons the incidence of damage seems to be increasing. The natures of modern agriculture with the emphasis upon monoculture and highly specialized crops, and the high cost of bringing the crops to the harvesting stage, are among the factors involved. Accurate estimates of the value of fruit or grain destroyed by birds are extremely difficult to obtain. Devices of various kinds to frighten the birds and spreading grains near the marshes of lure them from unharvested grain fields, are two methods that have been used. Both are cumbersome and expensive and are not always effective. The problems of bird conflicts with crops are so numerous, complex and varied that no one solution can be expected. Some effective control measures have been developed, but many more are needed, adaptable to the peculiarities of the problem faced. Non lethal methods are particularly appropriate, for many of the birds that cause trouble one situation is valued in others. Where lethal methods deemed necessary it is important that they be specific or selective, so that they will not needlessly destroy non target species or have a long-lasting effect upon the environment as it is done by many of the pesticides now commonly used.

Wildlife problem involving the forest and range: Damage to the forest by wildlife is widely scattered and usually attracts little attention. Perhaps the commonest effect is upon tree reproduction, because a large number of birds and mammals feed upon the seeds. Both artificially seeded and natural forest reproductions have been severely damaged by a variety of small mammals, particularly mice and squirrels. Areas cleared through logging or fire is particularly vulnerable to wildlife damage during the stage of reseeding and growth of seedlings, because many spp of wildlife are attracted into the openings. Two other types of damage widespread in the forest are clipping and browsing of timber spp by big game, rabbits, hares and others: and the bark and root damage caused by rodents, such as mice and porcupines. Deer, elk and other ungulates have frequently become so numerous that their feeding has caused severe damage to forest, especially to seedlings. In most areas, however, population control is now being achieved through regulated hunting and this type of damage is far less widespread than in the past. The total ecological impact of rodent on range land is clearly a result of a variety of factors (burrowing, sand building and food storage activities). Both natives and domestic animals affect vegetation: it is of primary importance to determine precisely what these effects are: how they are brought about. A final and more difficult step is to develop management practices that maintain a vegetational complex such that there will be minimum rodent and rabbit damage and maximum forage for livestock and game animals.

Non agricultural wildlife problems: wild birds and mammals act as carriers or reservoirs for certain diseases of man and domestic animals. A few of these, such as rabies, are of great economic importance but the majority are local or temporary and do not usually result in controlling demands of any magnitude perhaps the most spectacular conflict between birds and man involves the birds – air plane problem, which was brought dramatically to public attention in 1960 when a jet plane crashed at Logan International Airport, Buston, killing a number of persons. In this instance, flock of starlings was socked into the jet engines. In Canada, the Air-Canada has maintained records of strikes with birds and costs of repairing damage have been high running to millions of dollars annually. More accurate data must be maintained as a basis for remedial action, but the one simple fact that has come true most clearly, is that habitat conditions particularly attractive to birds cannot be tolerated in the immediate vicinity of jet airports.

Positive Values of Predators and Rodents:

Need for damage control research: The variety and magnitude of wildlife damage to man’s crops and property are sufficient to demand more effective control than are available at present. Research is urgently needed to develop the changes in agriculture and land use, and changes in wildlife population and their behavior repeatedly brings about new situations where damage by wildlife occurs. Furthermore, public attitude towards wildlife home changed so much that it is more essential than ever that non lethal types of control be used where ever feasible.

Methods of controlling or alleviating damage fall into at least four broad categories, biological and cultural, mechanical and electronic, chemical and payment for damage.

The Biological or Cultural includes some cases of California were water fowl have been lured from rice fields to areas of food planted especially for them. It also covers situations around air port where habitat have been modified to reduce their attractiveness to birds. And it might well include the development of crop varieties that are resistant to birds, though little has been accomplished so far with this approach.

The Electronic and Mechanical category includes various types of scaring devices of which the most successful to date have used recorded alarm or distress calls of gregarious birds. This last techniques has been used with considerable success against starlings in vineyards in Germany and France.

Chemical Methods have been used and are being given more attention e.g. toxicants, repellants, soporifics or stupefacient and the anti fertility agents that are been considered as away of holding some annual population in check.

Payment for Damage, as exemplified by the water fowl depredation crop insurance plan used in Canada, may have applicability to some conditions in the United States not Nigeria.