This Unit is about Current Electricity and how it works.

Conduction of electricity in metals

Metals have electrons that are loosely bound to the nuclei and are free to wander randomly through the metal from one point to the other. When the p.d is applied across the ends of the metal, an electric filed is set up. Electrons are accelerated by the field and so they gain kinetic energy. The accelerated electrons collide with atoms vibrating about a fixed mean position.

They give out some of their energy to the atoms. The amplitude of vibrations of atoms is then increased and the temperature of the atoms rises.

Electrons are again accelerated by the field and again  give up some of their energy on collision with the atoms of the metal. The overall acceleration of electrons is zero hence they acquire a constant average drift velocity, in the direction from the negative to the positive terminals of the battery. It is this drift of electrons that constitute an electric  current.

In general, current flow in metals is due to movement of electrons (negative charge). In gases and electrolytes, both positive and negative charges are involved.

Unit of charge: the coulomb (C)

A coulomb is the quantity of electric charge carried past a given point in a circuit when a steady current of  one ampere flows for one second.

Consider a conductor of length l, cross sectional  area A, having n electrons per unit volume, each carrying a charge e.

Number of electrons  in the conductor = nAl

(ii) current in the wire.

Under constant physical conditions, the potential difference across a conductor is proportional to the current through it.

The constant is the resistance R of the conductor.

The unit of resistance  is the ohm (W)

The ohm is the resistance of a conductor in which a current of one ampere flows when a p.d of one volt is applied across it.

A graph of I against V for a homogeneous conductor.

Graphs of I against V for non- Ohmic conductors

THIS VIDEO IS ABOUT OHM’S LAW

Emf of a source is the energy converted into electrical energy when 1C of charge passes through it.

Or it is the ratio of electrical power the source generates to the current which it delivers.

A graph of V against I is shown below

Power out put and efficiency 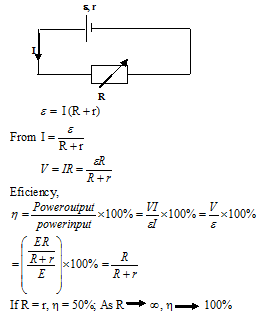 Hence a graph of h against Load resistance R  is shown below: 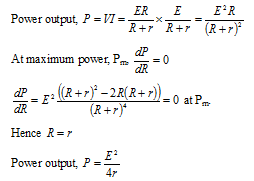 A graph of power out put P against load resistance R is shown below. 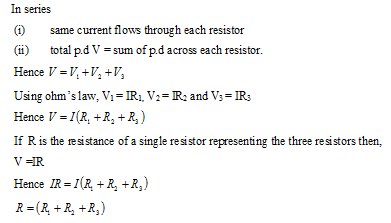 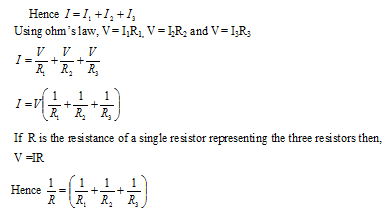 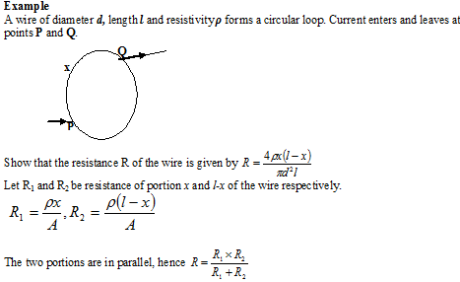 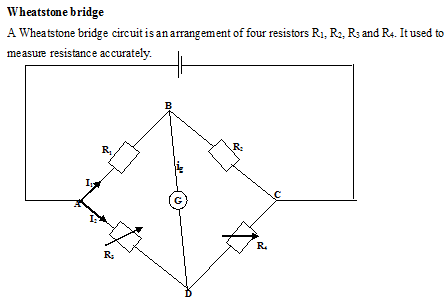 R3 and R4 are variable resistors where resistance can be read e.g. resistance box.

As R3 and R4 are varied, the potential at B and D change.

Therefore to balance the bridge, R3 and R4 are varied until the galvanometer indicates zero deflection. 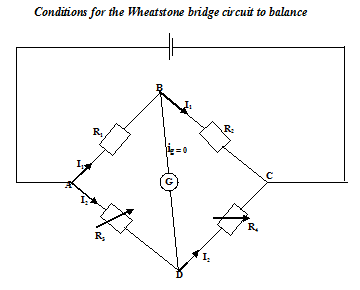 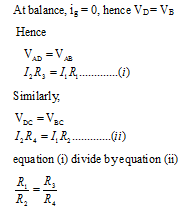 The above equation is the condition for a Wheatstone bridge to balance.

It is a form of a Wheatstone bridge with a resistance wire of uniform cross section area mounted on a metre rule. It is used to measure resistance, resistivity and temperature coefficient of resistance.

Condition for a metre bridge to balance. 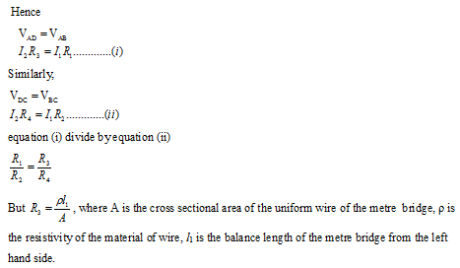 Owing to imperfect electrical contacts at A and C, contacts have small resistance which affect the accuracy of the results. But the effect on the accuracy becomes less significant if the balance point is near the 50cm mark.

Hence end errors have to be added to the balance lengths to account for the resistances at the contacts at the ends of the slide wire.

A specimen wire of known length x is connected in the left hand gap of a metre bridge with a standard resistor, Rs in the right hand gap of the bridge. The slider is moved along AC until the galvanometer indicates zero deflection. At this point  the metre bridge is balanced. The balance length l from the left hand side of the metre bridge is measured. The experiment is  repeated for different values of x and the corresponding balance lengths l are measured and recorded.

The specimen wire is made into a coil and immersed in water basin whose temperature θ°C is varied and measured with a thermometer placed in the water. The coil is connected to the left hand gap of the bridge and a standard resistor Rs  to the right hand gap.

At each temperature, θ°C, the balance length l from the left hand side id measured and recorded. 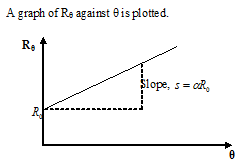 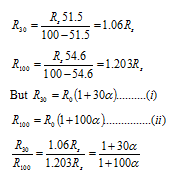