It is logically complex and multidisciplinary in character, a field in which all the main disciplines of educational study may be used to support practical recommendations and its validation will depend on work of a critical kind at various logical levels (Moore, 1978).

Two of the earliest educators and philosophers documented by Ozmon and Craver (1976) a nd Schofield (1982) will be considered here:

Educators should therefore, ask questions about what is natural for children and education should be guided by the child’s interest and that the child has an autonomy but the child must also prepare to suffer for the natural consequences of his/her behaviour.

He was a pragmatic thinker among others. He believed that there is n eed for genuine investigations into experience directed to real life problems. According to him, genuine thoughts start with a problematic situation. Educators must be sensitive to novelty and variations and must seek to be creative in dealing with problem

Experience cannot be separated from nature and so the child should be in the natural environment that facilitate social relationships and the educator must facilitate democratic education, unify both the mind and the body of the learner in thinking and doing.

Models are blueprints of curriculum that are miniature samples that summarize data and methods which help the reader to have an understanding of the whole package within a short period of time. The y help in theory building in curriculum work. Depending on the nature and complexity of what they represent, models generally are used in four categories:

(a) Physical Model: It is known as working model. It is a three dimensional device showing how things work, as in cluster of coloured balls used in chemistry class to show the structure of molecules.

(b) Conceptual Model: Known as verbal model where a verbalized concept is essentially stuck to on phenomena as an aid to comprehension. It might be sociological as in systems and games metaphors or industrial/business whereby students are regarded as raw materials processed in the factory.

(c) Mathematical Model: Tis is the most complex and reduces phenomena to mathemaical expressions as in chemical equations.

(d) Graphic Model: It is the common est which involves drawings or diagrams which make it possible for one through visual means to describe the components of the thing being modeled and to explain the relationships among its parts.

A curriculum model should allow quick comprehension of curriculum components and must be useful in theory building through suggestion of questions that need to be asked in data and in providing clues to possible answers. It should be possible to use model as a tool for stimulating research and theoretical construct. Some models shall be considered here:

MacDonald’s Model depicts curriculum as one of our interacting systems involving other systems such as teaching, learning and instruction. Teaching depicts a personality system involving a teacher performing his professional roles, learning as another personality system wherein the students perform task-related activities or behaviours which produce learning while instruction is the social system in which formal teaching and learning processes occur which involves principally, the teacher and the learner while the curriculum is regarded as the social system which culminates in a plan for instruction.

An illustration of Mcdonald’s model 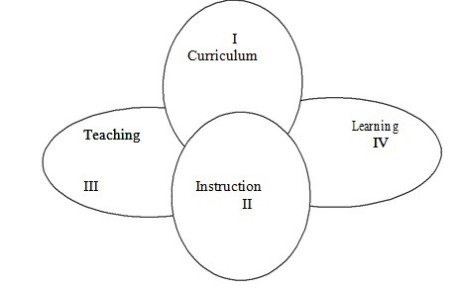 The figure indicate the point of congruence where curriculum goals are operative in the in tructional setting through the agency of effective teaching activity as evidenced by the changed behaviour or learning of students. This model brings to light the relationship between teaching/learning, instruction and curriculum as an individual system.

Johnson’s Model of the Dynamics of Curriculum and Instruction System

While MacDon ald also sees the role of curriculum in struction as that of guidance, it is a static representation with no visible processes built in, which is the focus of Johnson’s by indicating the dynamics of the process of curriculum construction, development and implementation.

However, it has the weakness of not expressing the complex relationships between teaching, learning, instruction and curriculum as MacDonald does.

An illustration of Johnson’s Model 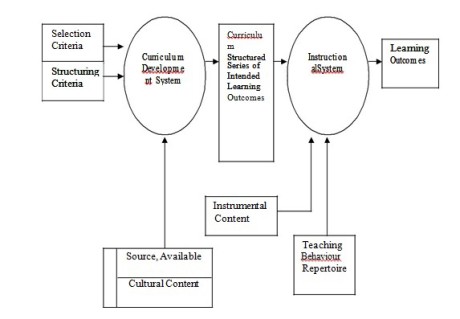 Zais’ Eclectic Model (The Foundations and Nature of the Curriculum)

Zais’ Model of curriculum d evelopment attempts to show in static terms the curriculum components and the principal forces that influence its substance and design. Its principal concern is to show graphically the principal variables and their relationships that planners need to consider in curriculum construction.

(d) evaluation are separated by jagged lines like a jigsaw puzzle which is meant to indicate the relatedness of each component to the rest fitting well to give a well articulated picture.

The model is illustrated as below 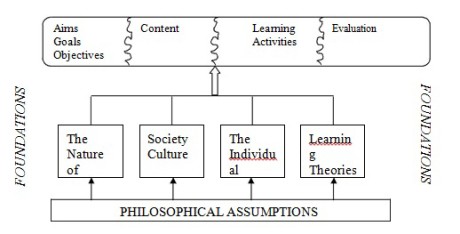 Theory connotes interpreting established knowledge that is real, factual. It is valuable but not speculative and not something we can refer to as common sense. Models should be seen as blueprints of curriculum that are abstractions of reality that summarize data and methods which help the reader to have an understanding of the whole learning tasks(curriculum development) within a short period of time.