Nature of the gene and Protein synthesis 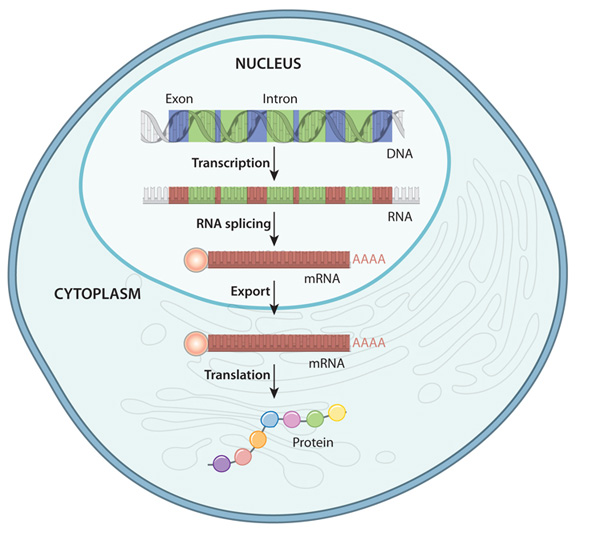 Nature of the Gene and Protein Synthesis

Gene This is a segment of DNA that tell the body how to produce specific proteins – contain the genetic information that is passed from parents to their offspring. These genes are found in structures called chromosomes, which are passed to the embryo during conception. Because the DNA passed from one human to another helps determine gender and physical characteristics, this nucleic acid is necessary for the survival of the species.

Evidences that DNA is the hereditary material

1. DNA is a stable molecule

2. The amount of DNA in a given species is constant for all cells.

3. Mutation or changes in the composition of DNA alter the organisms‟ characteristics

5. DNA rather than proteins of bacteriophage (T2 phage) that infect E. coli was shown to be the hereditary material because it enabled the E. coli to synthesize the new T2 phages viruses.

Nucleic acids This is a form of genetic material in all living organisms including the simplest viruses. Nucleic acids are polymers made of subunits called nucleotides.

1. Deoxyribonucleic acid (DNA) is found in the nucleus

2. Ribonucleic acid (RNA) is found in both nucleus and cytoplasm. A nucleotide is made up of three molecules:

(ii) Pentose sugar – either Deoxyribose (in DNA) or Ribose (in RNA)

(iii) Nitrogen base – any purine (Adenine, Guanine) or pyrimidine (Cytosine and either Thymine in DNA or Uracil in RNA)

Structure of nucleotide It is made of phosphoric acid, sugar and an organic base. 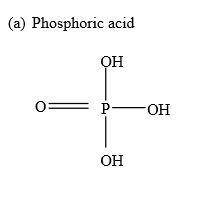 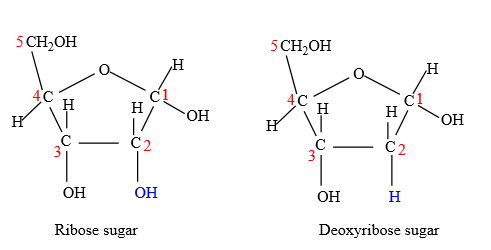 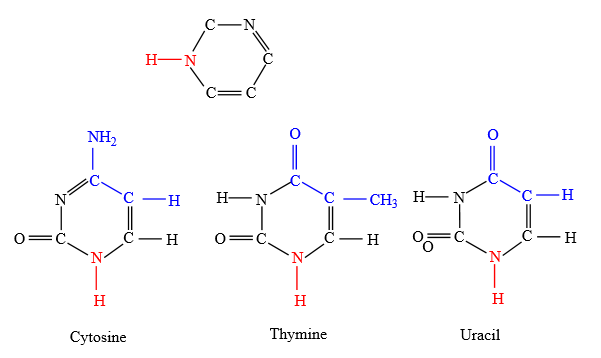 Nucleoside forms when a pentose sugar joins an organic base by condensation reaction (a water molecule is lost).

Nucleotide forms when a nucleoside (pentose sugar + organic base) joins a phosphate by loss of second water molecule. 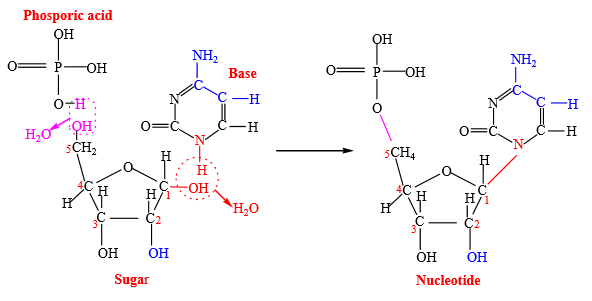 The sugar-phosphate-sugar backbone is formed when the 3‟ carbon on one sugar joins to the 5‟ carbon on the next sugar by phosphodiester bonds repeatedly to form a polynucleotide (long chain of nucleotides) with organic bases protruding sideways from sugars. Nitrogen base

DNA structure according to Watson and Crick

3. A DNA nucleotide is made up of three molecules:

6. The sugar-phosphate-sugar backbone is held by covalent phosphodiester bonds, while the nitrogen bases from the two strands form weak hydrogen bonds by complimentary base pairing i.e. A with T, C with G. 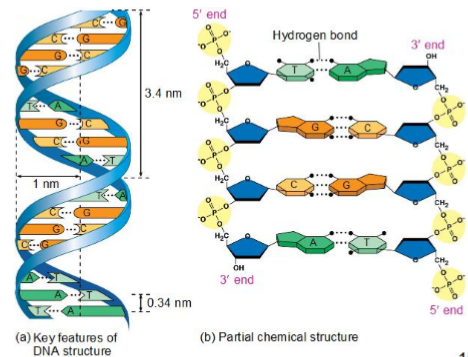 Populations grow and decline in characteristic ways. The size of population increase will be determined by the reproductive potential of the organism concerned and by environmental resistance. A Plot of the number of individuals against time form a growth curve.

(iii) Sugar-phosphate backbones are two / it is double stranded to provide stability.

(vi) Double helical structure makes the molecule compact to fit in the nucleus.

(vii) Base sequence allows information to be stored.

(x) There is complementary base pairing / A-T and G-C for accurate replication/identical copies can be made;

DNA replication is the process by which the parent DNA molecule makes another copy of itself.

2. Conservative hypothesis This suggests that the DNA strands remain intact but in some way initiate the synthesis of new but exact copies of DNA to the parent DNA.

3. Semi-conservative hypothesis The parent DNA molecule separates into its two component strands, each of which acts as a template for the formation of a new complementary strand. The two daughter molecules therefore contain half the parent DNA and half new DNA. The semi conservative hypothesis was shown to be the true mechanism by the work of Meselsohn and Stahl (1958) in their experiment on bacterium E.coli using radioactive 15N. 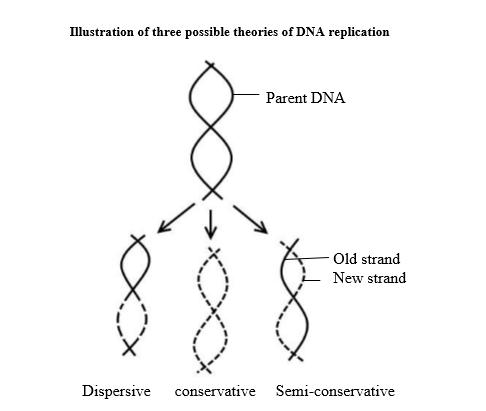 1. Free nucleotides to bond with complementary bases on the separated DNA strands.

2. Energy source in form of ATP

4. Enzymes such as DNA polymerase, DNA helicase and DNA lingaze.

1. DNA unwinds and then split open by a Helicase enzyme to expose the bases on either strand. The initiation point is a place rich in A-T probably because these are held by two hydrogen bonds as oppose to the three hydrogen bonds between C and G. The structure that is created is known as “Replication Fork”. 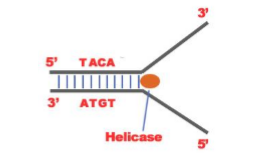 2. An enzyme RNA Primase bind to DNA at the initiation point and attracts the first nucleotide of the 3‟-5‟ strand

WATCH THIS VIDEO ABOUT PROTEIN SYNTHESIS