The unit is about prepositions studied in Primary Six 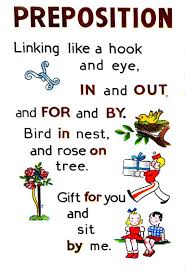 What is a preposition?

Prepositions of place include; here, above, across, along, at, after, before, behind, below, beside, beyond, by, in, near, off, out, under, on, etc.

We met at the dance yesterday.

He went round the house.

Prepositions of Time: These include; after, at, around, before, between, beyond, in, on, by, during, from, of, since, for, until, till etc.

We slept till six o’clock

They will meet at midday

These are prepositions for saying that a person or things make something happen. e.g.

with, by and due to are prepositions.

Others include; through, owing to, by means of etc.

Some of the prepositions in pairs.

into – shows motion – Pour this water into a jag.

in – shows position – That book is in the box.

at – used for a smaller place. – He stays at Entebbe port.

in – used for a bigger place. – He stays in Uganda.

between – for two people – The twins shared between themselves.

among – for more than two persons. – The triplet shared among themselves.

by – used for person or agent. The chair was broken by John.

with – used for an instrument. – He killed him with a knife.

beside – means near. – the cat is sitting beside the bed.

besides – means over and above.

I have two pens besides this one.

in – shows ending time. – I shall be back in time.

within – shows before ending time. – I shall be back within a week.

On – shows position – The lion sat on the table.

Upon – shows motion. – The lion jumped upon the goat.

below – means lower than – His height is below two feet.

under – means in and covered by – The snake is under the bed.

on – shows contact – The book is on the table.

above – shows position – The clouds are above our heads.

There is not difference between till and until. They are both used to refer to time e.g.

We wanted at the station till midday.

We wanted at the station until midday.

Fill in a correct preposition.

POSITION OF ADVERBS IN A SENTENCE.

Position of adverbs in a sentence.

Adverbs can follow the direct object of a sentence.

Where there is no direct object, the adverb can follow the verb it refers to.

-Mary did well in the exams.

-The magazine is published weekly.

Note:  Adverbs are not positioned between a verb and a direct object.  They are positioned either at the beginning, middle or at the end of a sentence.

Or.  I bought a new dress last week.

Adverbs of time and duration.

These are commonly placed at the beginning of a sentence, clause or immediately after the linking word e.g

(a)  Last year, he addressed the school in vernacular.

(b)  For over five hours, he watched cartoons.

These occasionally come at the beginning of a sentence or clause e.g

Just and already are used with the present perfect tense to talk about something that has just happened a while ago.  Read the following examples:

The teacher slapped the boy while ago.

The teacher has just slapped the boy.

Already is used with both the present and past perfect.

What is a participle?

A participle is a form of verb used in compound tenses and as an adjective. Past participles are used after helping verbs.

e.g.    That class is swept every morning.

The boy was murdered at night.

He has sung a very nice song.

Otto has cut her finger.

In the above examples, swept, murdered, sung, and cut are called participles. Some participles end with ed, t and others change their inside vowels.

Participles ending with –ed – . Study the examples below.

Use the correct form of the verb in brackets to complete the sentences below.

PAST PARTICIPLES WHICH END WITH – T

Some participles end with – t – and these are formed from irregular verbs. Study the examples be

PAST PARTICIPLES WITH LETTER – U

Past participles with letter – u

Below are some of the past participles with letter u.

Form a correct past participle from verb in brackets.

Fill in each space with the correct form of the verb.

I prefer twins to triplets. ———- I would rather have twins than triplets.

It is too late to prepare supper. Let’s prepare tea.

We would rather prepare tea than supper.

We use….such…that.. and ……so..that…. to express a degree or amount, to talk about the cause and the result.

The film is very good. We can’t miss it.

The film is so good that we can’t miss it.

He speaks very clearly. You cannot miss any word

He speaks so clearly that you cannot miss any word.

Use …..such…… that…..to join the following sentences.

The present simple tense is used to:

I go to school every day.

He catches the bus to school

b)to talk about things which do not change

Grace lives next door to me.

Kampala is the capital city of Uganda.

Structure of the present simple tense

PASSIVE: the passive of the present simple tense is formed as below;

Object+ is/are+the verb in the past participle form

The compound is cleaned by Musa every day.

Change the following sentences from active voice to passive voice

It is used to:

I am chopping wood for the fire.

The stars are shining brightly.

The children are playing football now.

The crops are growing very fast.

Structure of the present continuous tense

I am watching (am not watching)

She    is watching (is not watching)

The passive of the present continuous tense

It is written as below:

The present perfect tense connects the present with the past. It is used to:

I have bought some paper today.

We have known each other for years.

The teacher has marked our books.

NB: all verbs in the present perfect tense are in the past participle form.

Put the verb in brackets the present perfect tense

The passive of the present perfect tense

The passive is written as: object+has been/have been+ verb in the past participle form………….

Change the following sentences to passive.

NB: The structure can be used to tell the use of something.

Construct sentences from the table below using the structure…..used for…….

NB: The can be used to describe the necessary and important steps taken in doing something in the right way.

Use the structure…….first…….next……the……to describe how the following are made.

Now describe the steps you may take in doing the following activities using the structure….first……next…..then………………

Besides is used to mean in addition to or apart from

Join the following sentences using ……though……and it should be placed at the beginning of each sentence.

This can be used to warn someone against something that may be dangerous.

Construct sentences using the structure …..be careful…………….basing on the following activities.

As soon as the seamstress finished sewing the dress, she hung it.

The seamstress hung the dress as soon as she finished sewing it.

NB: as soon as, immediately and no sooner carry a similar meaning; therefore it is very wrong to use any two of them in one sentence.

Join the following sentences using……….as soon as……in the middle of a sentence.

But is used to introduce a word or phrase that contrasts with what was said before.

You and I are tailors

Sarah and Cynthia made good dresses.

What is a noun?

A noun is a naming word.

Nouns are names given to people, e.g. Sarah, Namusobya, Luswata.

Identify nouns in the following sentences.

Study the examples below.

Other nouns are formed from adjectives. Study the examples below.

What are collective nouns?

These are nouns which stand for a group or collection of people, animals, birds, insects or any other things e.g.

A team of players

A class of students

A choir of singers

A company of actors.

Fill in the blank spaces correctly.

Give a single word for the underlined group of words.

There are three types of conditional sentences

Conditional sentences type one (IF1)

(a)  If uncle pays schools, I will go to school next term.

(b)  The table will collapse if you stand on it.

(c)  I will punish you if you misbehave.

Put the verbs in brackets into the correct tenses.

(b)  I would be a millionaire if I were a king.

(a)  What would you do if you found a burglar in your house?

(b)  If he were a snake, he would bite all sinners.

Put the verbs in brackets into the correct tenses.

Rewrite the following sentences in If 2.

Rewrite the following sentences using the structure: You should…………………….

We should not mistreat those animals.

You should not milk sick cows.

Rewrite the following sentences using the structure: You should not……….

Join the following sentences using the structure; Not only………but also………….

NB: the structure can be used with conditional (ii)