this helps understand what relative pronouns are and how they are used in english grammar. 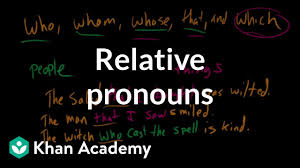 A relative pronoun is a pronoun that begins a subordinate clause and relates to an idea in the sentence.

Examples of relative pronoun are:

-who, whose, whom (specifically used to talk about people)

– That, which (specifically used to refer to objects)

It is used for people.

That is the boy who hit me.

Mary is the girl who caused the accident.

“Whose” refers to people or things it shows possession.

He married a girl whose father was rich.

They gave her a horse whose legs were very short.

We saw a house whose windows were all broken.

THIS VIDEO SHOWS THE USE OF RELATIVE PRONOUNS

When a pronoun is the object of the clause, you can use whom, instead of who. Whom is used after a preposition for people.

The man to whom you spoke is the manager.

The person with whom you have an appointment will be back soon.

Which and that are used for things and animals

The dog which the madman was chasing was killed.

The dog that the madman was chasing was killed.

That is the tree which fell over the house last week.

That is the tree that fell over the house last week.

Complete the following sentences with the correct word.

Re-write the given sentences as instructed in the brackets