The unit inducates how sulphates are formed

Action of heat on sulphates

On strong heating, a dirty white solid decompose to give white fumes (of sulphur dioxide) and block residue (of copper (II) oxide).

Copper (II) sulphate crystals were heated gently then strongly until no further change occurred. Stale what was observed and write equations for the reaction.

On the gentle heating a colourlless liquid was given off which turned anhydrous copper (II) sulphate blue. The pale green crystals changed to a dirty white solid (anhydrous Iron (II) sulphate.)

On strong heating, the dirty white solid turned grey, and finally a reddish brown solid was formed as a residue (iron (III) oxide) white fumes were given off (sulphur trioxide) and a colourless gas which turned blue litmus pink and bleached it (sulphur dioxide)

Solubility of the sulphates in water

All common sulphates are souluble except lead (II) sulphate and barium sulphate,

Testing for the sulphate ion SO42-

Formation of white precipitat insoluble in the acid conforms presence of the sulphate ion.

The gas is collected over warm water. (Hydrogen sulphide is fairly soluble in cold water). If required dry, it can be dried using fused calcium chloride and is collected by down ward delivery.

Therefore the hydrogen sulphide prepared contains hydrogen as an impurity 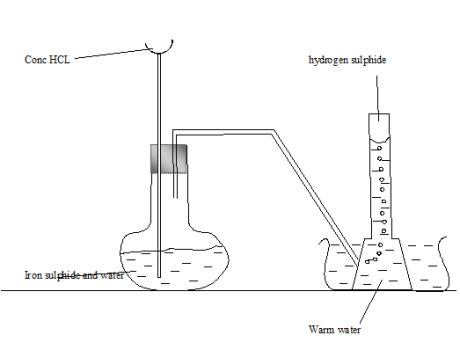 In the presence of water (moisture) hydrogen sulphide reduces dioxide to sulphur.

Hydrogen sulphide is a stronger reducing agent compared to sulphurdioxide.

The yellow deposit is not formed. Products are water vapour and sulphur dioxide gas

It reacts with some solutions of metals slats to form insoluble metal sulphide e.g. with a solution containing copper (II) ions, black precipitate of copper (II) ions were formed.

Hydrogen sulphide as a pollutant

One of the major sources is sewage and marshe.

The gas is very poisonous and has a epulsive smell of rotten eggs.