1.0 INTRODUCTIONThis unit introduces you to the traditional (and some would say, ancient!) tools of system analysis and programming. Remember, these were the methodologies used before the advent of fast compilers and affordable computing.2.0 OBJECTIVESBy the end of this unit, you should be able to:• Explain the rules and guidelines of flowcharting standards• Explain the purpose of a screen layout chart• Design a program flowchart• Explain system flowchart symbols used in programming

A number of forms have been developed to make it easier to specify in detail the input and output from a computer application. A print chart is used to describe the format of an output report from a printer. A card layout chart is used to describe how input data is placed on one or more computer cards. Different companies and data processing departments might use slightly different forms. In addition, there are other charts and forms that describe the exact layout or positioning of data on magnetic tape, disk, and the display terminal or CRT.

During the last decade, more and more companies have started using terminals or CRTs to perform data input instead of computer cards and card readers. Because of this, there is a greater emphasis on the use of screen layout charts rather than the traditional card layout charts. The purpose of a screen layout chart is to reveal what information and data is to be displayed on the screen during processing. The screen layout chart reveals both data to be entered into the computer as well as the information and data to be displayed on the terminal device. For some applications, there may be 100 or more different screens that can appear on the display terminal. To perform an adequate job during design and system documentation, screen layout charts should be developed for every possible screen that can appear on the display terminals.

Like a road map, flowcharts are used to reveal how to go from a starting point to the final destination and can be used to display any amount of detail. In developing application software, a general chart to reveal the overall purpose and structure of the application is needed.

This is usually called the system flowchart or application flowchart. More detailed flowcharts are also needed that reveal how each program is to be developed. This type of flowchart is called a program flowchart. 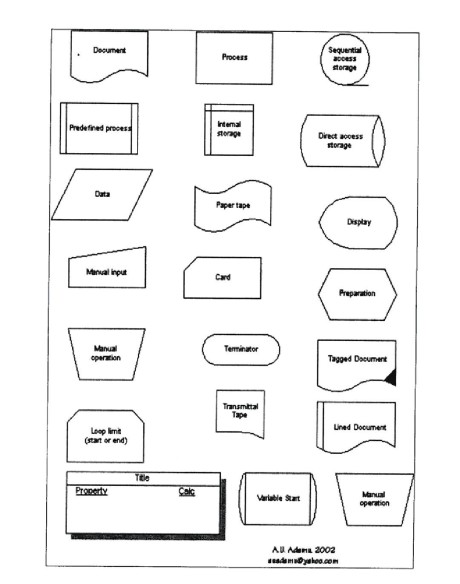 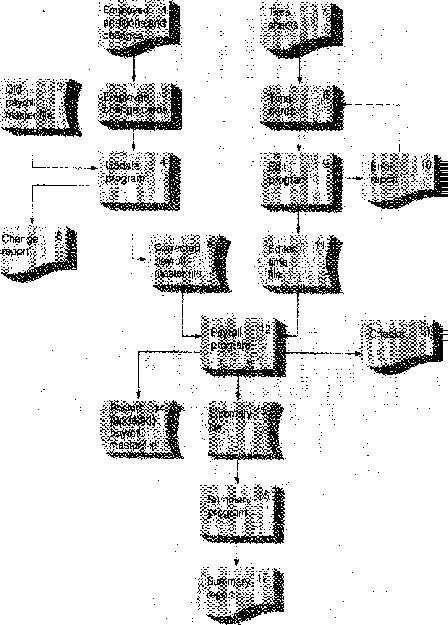 Furthermore, most payroll applications generate additional reports. One manager might want a report containing all employees working overtime this week, and another manager might want a report listing all employees qualified to perform certain jobs. These and similar reports and outputs become a part of the payroll application.

Once the system flowcharts have been developed, the next step is to design and structure the computer programs. Like blueprints of a building, program flowcharts reveal in detail how the program is to be built. Program flowchart symbols are used to show activities to be performed. The flowcharting template shown in Fig. 1 is used.

A flowchart for a payroll program (refer to symbol 12 in Fig. 2) can be developed. This program should read from the updated master file and the edited transactions file. It should write checks, update the master files, and prepare a summary report. In both program and system flowcharts, there can be various levels of detail. A flowchart that shows less detail is a macro flowchart, while a flowchart with more detail is a micro flowchart, or detailed flowchart.

While programmers and system analysts have a good deal of freedom in creating flowcharts, there are a number of general rules and guidelines recommended by the American National Standards Institute (ANSI) to help standardize the flowcharting process. Various computer manufacturers and data processing departments usually have similar flowcharting standards. Some of these rules and guidelines are:

Flowcharting books and manuals have been developed by various organizations. While these specific rules are beyond the scope of this course, good flowcharting procedures require they be followed.

Flowcharts were originally developed to help programmers and analysts design and document computer programs. As programs became larger, the use of flowcharts became more difficult to implement. New software has emerged over the last decade to facilitate programming. This includes Visio, a software program exclusively designed for flowcharting, as shown in Fig. 21.33. 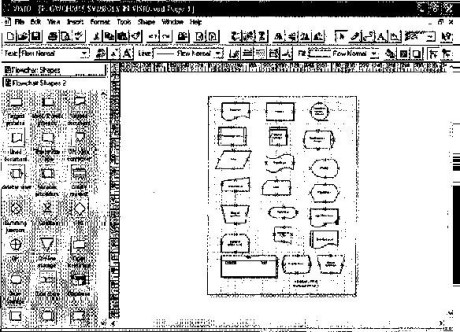 In the decision table, “Y” means yes, “N” means no, and “X” means the computer should take this action. 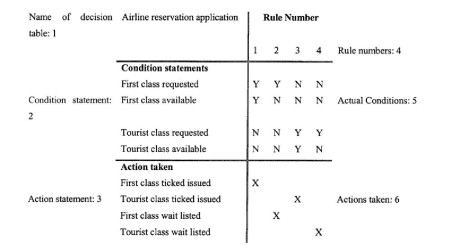 The Xs in the grid chart in Fig. 21.5 reveal what data is used for each application program. Look at the first column. The invoice application uses the item name, code number, and price. Likewise, the data used in any of the application programs listed in the grid chart can be found by reading down the appropriate column. In what applications is the reorder point data used? Going across the reorder point row, it can be seen that this data is used in the inventory reorder program and the master file program

Many traditional system design schemas, typical of the waterfall design described in SDLCs in earlier units are still employed to put thoughts to paper. Print charts, screen charts, and layout charts are used to reveal the exact layout and format of input data and output reports and documents. Both flowcharts and decision tables are used to display how the input data is to be manipulated to obtain the desired output. System flowcharts give the overall structure of the application while program flowcharts reveal how each individual program is to be written or constructed. In addition, micro- or detailed flowcharts can be used to reveal in detail how a computation or process is to be performed.