This Unit introduces one to Economics one with the reasons for studying it and also micro and macro economics.

According to the Classical Economists like David Ricardo and Adam Smith, economics is a science which studies the accumulation of wealth. Adam smith said that it is the study of the cause of nations but this definition was criticized as being too narrow because it doesn’t show how such wealth is made.

This means that economics as a subject is concerned with the way people and the nation become rich. However, this definition has been criticized for being narrow because it does not address the main problem facing man i.e

The Neo classical like Alfred marshal define economics as a science of accumulation of wealth as well as man’s welfare especially how man uses the material wealth to satisfy human wants.

Lipsay defines economics as a science which studies the location of society’s resources and the distribution of societies output among alternative users.

Professor Robins defines economics as a social science that studies human behavior as a relationship between ends and scarce means that have alternative users.

The definition covers the 3 fundamental problems in the society which include scarcity, choice and opportunity cost because it examines how people chose to use the limited or scarce resources in attempting to satisfy the unlimited wants.

THE SCOPE OF ECONOMICS

Economics covers all aspects of economic activities like production, exchange, consumption and distribution of commodities where production concerns creation of goods and services.

Exchange concerns the transfer of goods between individuals and countries.

Economics is both an art and a science. An art because it involves bi-utilization of the facts of science for practical purposes and a science because it is scientific body of knowledge that is ascertained by observance and experiment and also uses scientific methods in process theory.

As a science it uses both induction and deduction. Induction involves collection of facts about events to derive laws that can be tested. In this method, the facts are observed followed by formation of hypothesis then generalization and verification.

It involves deduction and in this method there is use of assumptions and propositions to derive predictions about actual events and then those events can be tested against actual facts.

Positive economics looks at statements regarding what is, what was and what will be. It’s about facts in real life e.g. a statement like prices in an economy usually fluctuate. The inflation rate in Uganda is between 10-12% per annum.

When there is political instabilities, economic activities are adversely affected.

Normative economics is about what an economy should be or would be. It’s about what and how things ought to and depends on individual opinion e.g. government should fight corruption for accelerated economic development.

Economics is related to other social sciences like psychology, political science, and sociology because problems in these areas affect the economic condition of a country.

Economics involves basic assumptions. These are the set of conditions that must be in place or be fulfilled in a given economic analysis. This is necessary because economics is concerned with the study of human behavior which is largely uncontrollable and complex that human reactions or certain conditions are likely to differ from one person to another.

Economics involve the study of activities of consumption, households, business units or firms as well as the government sector as the administrators of public resources.

THIS VIDEO EXPLAINS MORE ABOUT ECONOMICS

Micro economics is a branch of economics that deals with human behavior and choices as they relate to relatively small units i.e. individual, business firms, resource owners e.t.c.

It concerns the analysis of price determination and allocation of resources to specific uses.

It examines the working of the economy and answers three basic questions about what to produce, how to produce and for whom to produce. It’s based on two major assumptions;

It helps to understand the working of a free enterprise economy where the decision of what to produce, how much, when to produce and for whom to produce is guided by the price mechanism.

It helps to know how the costs of production and demand for goods come into play to determine the equilibrium between demand and supply.

It is useful in efficient allocation of resources. The economic units usually economize scarce resources and use them efficiently in the best alternatives. It shows resources move to where they are best or highly paid.

It helps in taxation policy to explain the welfare implication of taxation and its effects on the allocation of resources where resources move from production where there are high taxes to un taxed areas.

It can be used as the basis of production. It enables economists to forecast the results of certain policies like liberalization and privatization.

It can be used in examining conditions of economic welfare since it outlines ways of avoiding resource waste to achieve maximum economic welfare under condition of PARETO OPITMUM. This is a situation where in the allocation of resources one individual or society can only be made better off by making someone else worse off.

It’s helpful to business executives in attaining maximum productivity with the existing resources because they are able to know in advance the consumer demand and able to calculate the costs.

Based on the conditions of ‘’laissez faire’’ it’s a Latin word meaning leave alone and it refers to an economic situation where individuals and firms in an economy take economic decisions on what to consume or produce with a large measure of freedom with very limited or no government intervention.

It is concerned with the study of just individuals and their behavior and neglects the whole economy when all economists are put together.

Its misleading because some principles which are true in case of individual households and firms may not be correctly applicable to the whole economics.

MACRO ECONOMICS is the branch of economics that deals with human behavior and choices that they make in the entire economy e.g. inflation, national income, economic growth, unemployment etc.

It deals with overall aggregates by looking at the economy as a single functioning unit. There are variables which cover the economy as a whole. e.g. unemployment, banking, inflation, etc. macroeconomics takes into consideration the fact that the different sectors in the economy are inter-related in their decisions,the business firms, households and government are usually affected by the decision of each other.

It helps in understanding the behavior of economic units e.g. the effect of aggregate demand or demand for individual products.

It is used to make macroeconomic policies to solve problems which conflict the whole economy like over population, inflation, balance of payment problems etc.

It is used  in explaining why countries are faced with general unemployment by looking at total expenditure, total investment, total output, total consumption and overall national income e.g. when there is on investment, it leads to low consumption, income, low  demand which results into unemployment and its effects.

The study of national income helps to evaluate the overall performance of the economy e.g. whether the economy is having a boom or depreciation.

The study of aggregate growth in economics helps to evaluate resource capacities and utilization in order to aid economic plans to increase on the overall output of the output.

Helps in studying the monetary problems of the country. The students can understand the accuracy of inflation and deflation and see how such problems can be controlled by the use of monetary and fiscal policies.

In the study of business cycles it shows the causes, effects and remedies of the upswings and downswings that affect the economy.

An economy can usually be divided into four broad sectors:

Household sector. Made up of households who are consumers and resource owners.

Business sector/firms. These are users of factors of production to produce goods and services.

Government sector. This is part producer and part consumer and the regulator of the economy.

The theories of development in macroeconomics have limited relevance to the developing economies and to real life situations e.g. Rowstow’s theory on growth, the Malthusian population theory and the quantity theory of money.

It focuses more on aggregates and thinks that all economic units behave with homogeneity but this is not true.

Some of the recommendations tend to be controversial when it comes to policy implementation e.g. although growth should lead to development, in real economies, policies intended to accelerate economic growth usually result in low levels of development. Policies intended to improve welfare usually result in high levels of taxation to generate a lot of revenue but this in turn leads to reduction in the standard of living. 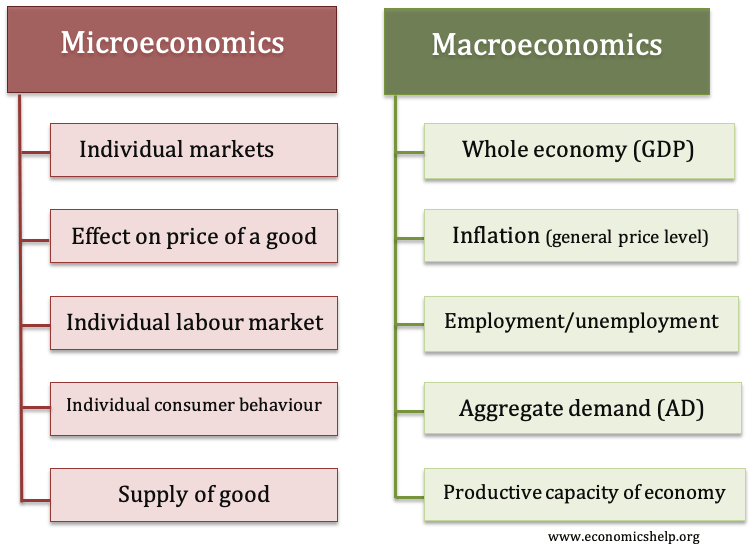 THIS VIDEO EXPLAINS THE DIFFERENCE BETWEEN MICRO AND MACRO ECONOMICS.